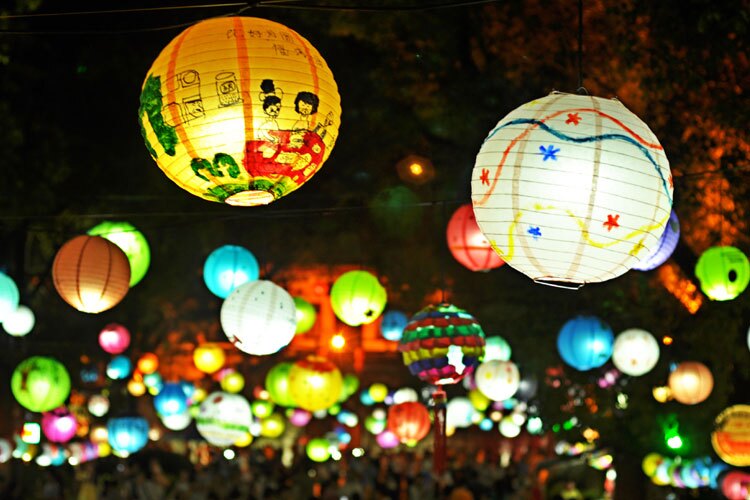 Spring Festival also called Chinese New Year is the most important festival in China. It takes place in late January or early February. There are many colorful celebrations for this festival such as dragon dance, lion dance, temple fair, etc.

Mid-Autumn Festival is the second important traditional festival celebrated all over China. It takes place in late September or early October. The festival means family reunion and harmony. The most important practice for the festival is eating mooncakes.

Read more on how the Mid-autumn Festival is celebrated in China.

The main celebrations for the Dragon Boat Festival are eating Zongzi-Chinese food made of glutinous rice stuffed with different fillings, and Dragon boat racing.  The festival is associated with the sad story of the famous ancient poet who drowned himself.

Qingming Festival falls on 4th or 5th, Apri. It is also one of the 24 Chinese Solar Terms.  It is a day for people to go out for tomb sweeping and spring outings.

The Lantern Festival marks the end of the Chinese New Year Festival celebrations. It often falls in February. The main activities for the festival are lighting colorful lanterns and eating Tangyuan (Sweet Rice balls with black sesame filling).

Chongyang Festival takes place on the 9th day of the 9th lunar month. It is mainly regarded Senior Citizens’ Festival. Celebrations for the festival including climbing hills and appreciating chrysanthemum blooms.

The Qixi Festival is celebrated on every 7th day of the 7th month according to the Chinese lunar calendar. The festival is known as Chinese Valentine's Day.

The Winter Solstice falls on December 21 or December 22. It is the day when the daytime is the shortest and nighttime is the longest. The festival marks the beginning of the Chinese New Year celebrations. The Chinese people celebrate this festival by eating Chinese dumplings.