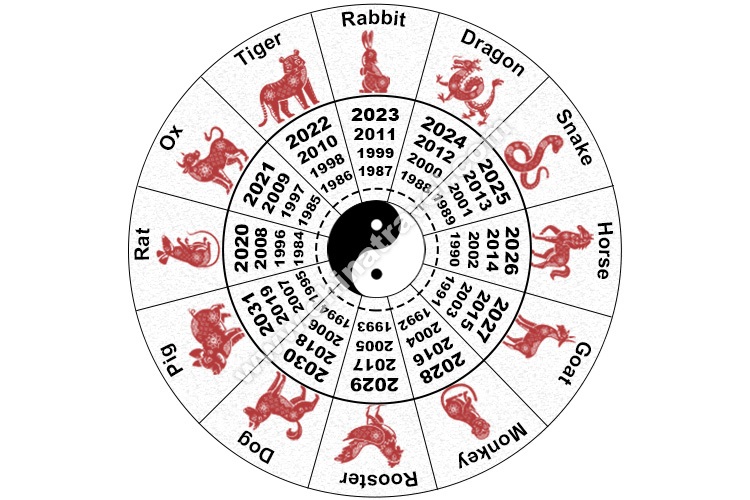 Chinese zodiac (sheng xiao) includes a total of 12 animal signs. The animals are Rat, Ox, Tiger, Rabbit, Dragon, Snake, Horse, Goat, Monkey, Rooster, Dog, and Pig. They are used to tell the year. The signs change each lunar year on a rotating cycle, which can influence people’s compatibility, personality, and horoscope.

If you don't know your Chinese zodiac sign, use the Chinese Zodiac Signs Calculator to find out your zodiac sign.

In ancient times, the Chinese zodiac is a system to tell the year. Each year is represented by an animal. It is a recycling circle of 12 years. The Chinese zodiac year starts on the Chinese lunar New Year, which is about one or two months behind the Gregorian calendar.

The table below lists the recent Chinese Zodiac Years:

Click the following zodiac animals below to explore their personality, romantic love compatibility, lucky things, and fortune prediction for 2023.

Chinese Zodiac Compatibility - Who Is Most Compatible With Me?

Chinese zodiac match was used to find one’s best partner in love in ancient times. Zodiac compatibility was usually checked before people got married in China.

Check out what is your most compatible sign below.

You may want to read more about Chinese zodiac compatibility.

Find the luckiest things for your zodiac sign. Following the lucky things and avoiding the unlucky things will bring you good luck.

According to Chinese astrology, a person’s fortune is decided by his/her zodiac sign. Thus, the Chinese have developed a theory to predict people’s horoscopes based on their birth years.

Is 2023 a lucky year? For some zodiac signs, it is, but for others, it may be a very bad year. Read the predictions on What are the luckiest zodiac signs in 2023.

It is widely believed if the year is the same as your zodiac sign, you will be unlucky all year. Many Chinese people think one’s zodiac year is a hurdle to jump over. 2023 is the year of the rabbit, rabbits should particularly be careful.

The way to protect yourself from bad luck and evil spirits is to wear red things such as red underwear, and a red belt. etc. Even though it seems superstitious, Chinese people treat it as a real concern. That is the reason why you will see red things sold everywhere on the Chinese New Year market.

Read more details on How to be Lucky in Your Chinese Zodiac Year.

According to Chinese astrology, some of the Chinese zodiac signs are destined for good luck. They are Rats, Dragons, Pigs, Oxen, and Snakes.

Being quick-witted and smart, Rat men will usually have a great chance to marry a beautiful wife.

Dragon is the most powerful zodiac sign. People born in the year of the dragon are confident, so they are more likely to make great achievements in a career.

The Pig is thought of as a lucky zodiac sign as it is the symbol of wealth, happiness, and honesty in Chinese culture.

Ox is the symbol of diligence. The ox zodiac sign is particularly blessed by God to get a prosperous fortune.

The snake is an enigmatic animal among the 12 Chinese zodiac signs. They like to work alone and to be quiet most of the time.

The Goat was generally thought to be the unluckiest sign in the Chinese zodiac. Maybe it’s because Empress Dowager Cixi’s zodiac sign is Goat, there is a popular saying that 90% of Goats are inadequate (十羊九不全) in Chinese folk.

It is thought that most people born in the year of the Goat are destined for bad luck. So many Chinese people would not want to have babies in the Goat years.

According to ancient records, the origins of the zodiac came from the “totems” of ancient tribes. Each tribe had its unique animal symbol as its protecting deity.

Legend gives another interesting explanation: the grand race. The race was organized by the King of Heaven who controlled all of the universes. These 12 animals won the race and thus were chosen as the zodiac year animals.

Why the little rat could be the first sign? Why the cat is not in the 12 zodiac sign? Read more on the Chinese zodiac story.

Each zodiac year is associated with one of the five elements: wood, earth, fire, water, and metal.

For example, for the rabbit years, there are years of the wood rabbit, earth rabbit, water rabbit, and metal rabbit. 2023 is the year of the water rabbit. The next water rabbit will come in 60 years.

In ancient China, each day was divided into 12 two-hour periods. each period was represented by a zodiac animal by that animal's nature.

Many Chinese believe the hour of your birth is more important than the year you were born. Therefore, Chinese zodiac hours can be particularly informative when analyzing your personality and your destiny.

The Chinese zodiac originated from the worship of animals. Many scholars think the zodiac signs came from the “totems” of ancient tribes. Each tribe had its unique animal symbol as its protecting deity.

Now, many people still believe in the zodiac and its prediction.