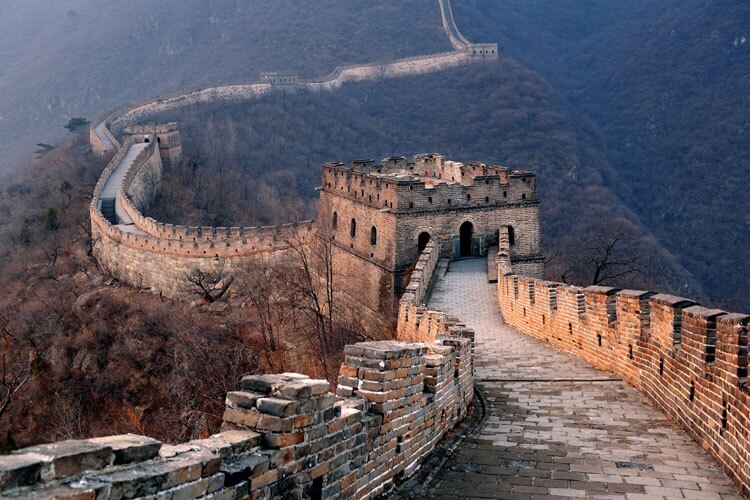 The Great Wall of China

The Great Wall is one of the largest and most celebrated achievements of ancient China, with 19 different dynasties, contributing to its construction from the 7th century BC to the 16th century AD.

The Great Wall is the longest wall and consists of many sections. It is unparalleled in the world in scale and span of construction, meandering from the east to the west of China like a giant dragon. It traverses a changing topography of deserts, grasslands, plateaus, and mountains.

On this page, we list 8 facts and 10 questions many people may ask about this fortification in the following passages, and the useful information we offer can help you make a well-organized plan for your trip.

8 Basic Facts about the Great Wall

How Long is the Great Wall?

If there were no destruction, the total length of the Great Wall would be 21,196 kilometers. However, the Great Wall was being destroyed continuously by nature or wars during the last 2,000 years, despite the fact that emperors of every dynasty never stopped constructing it. Nowadays, 8,851 kilometers of the Great Wall still can be seen. Fortunately, the Chinese government is spending lots of money to reserve the Great Wall, so it is believed its length will not reduce anymore.

Where is the Great Wall of China located?

The Great Wall starts at Jiayuguan Pass in Gansu Province and meets the ocean at Hushan Mountain of Liaoning Province. There are over 101 sections remaining in 15 provinces and cities. The top 3 popular sections around Beijing are:

You may have your own interests and requirements. You will get more information on Advice for Visiting the Great Wall.

All sections of the Great Wall are listed as follows.

Who Built the Great Wall?

In keeping with its immense size, the Great Wall involved an unprecedented number of laborers and met with a great many difficulties in its construction. Experts estimate that during the reign of the first emperor of Qin (246-210 BC), one in twenty people was forced to join this construction project. Who were they?

According to historical records, the builders of the Great Wall were comprised of three groups: namely soldiers, peasants, and convicted criminals.

Nearly 300,000 soldiers were summoned by the first emperor of Qin as a major labor force to take part in the construction. Countless peasants who could not bear the burden of various kinds of taxes were forced to physically shoulder heavy stones and help build the Great Wall.

In addition, convicts who had committed crimes ranging from homicide to tax evasion, as well as prisoners of war, were all punished with ‘Wall-duty’.

Lots of people were forced to build the Great Wall, so there are many sad stories that happened at that time. The most widespread one is "Meng Jiangnv bringing down the Great Wall with tears". If you are interested in more stories, see Great All Culture and Stories.

Why the Great Wall Was Built?

1. The original aim of this fortification was to protect the Chinese Empire from incursions conducted by barbarian nomads from the north. The Wall did partially serve its purpose as a military barricade in ancient China, especially in the age of hand-to-hand combat.

2. However, it seldom actually stopped invaders from entering China. Instead, it acted more as a psychological barrier between the northern and southern civilizations, and as a symbol of China’s endurance.

3. Another purpose of the Great Wall was to strengthen border control. This included levying tax duties on goods imported or exported from the Silk Road, and controlling domestic and foreign trade, and migration across the border.

What are the Construction Materials of the Great Wall?

Most sections of the Great Wall were crafted from materials that could be found locally, like bricks, stones, wood, and earth. Even more interestingly, certain materials used would be the last things to serve as construction materials today, such as glutinous rice which was often incorporated in the mortar as adhesive. This shows the resourcefulness and creativity of the people of ancient China.

How They Transfer the Construction Materials?

Though the precipitous mountain ridges added extra defensive value to the Great Wall, they also caused great difficulty in the transportation of construction materials for the laborers. There is well-documented evidence that three major strategies were chosen to tackle this problem.

Back in that less-developed period, laborers had the main responsibility of carrying stones, earth, and bricks up to the mountains on their own. More often than not, these building materials were relayed up mountain slopes from one man to the next, which reduced transportation time and effort.

Animals such as goats, donkeys, and horses also acted as supplementary transportation in delivering construction materials at that time. Since these animals were said to be experts at climbing mountains and carrying heavy loads, people tied baskets filled with building materials on their horns or their backs and drove them up the mountains.

How the People of Ancient Times Built the Great Wall?

It is hard to imagine how men of old completed such a gigantic project without advanced transportation and modern building technology! No wonder scholars regard the Wall as evidence of the wisdom of ancient China.

During the process of erecting the Wall, ancient laborers took full advantage of geography by using the mountains and rivers in the area as natural defenses, which they fortified with countless watchtowers, garrison towns, beacon towers, and blockhouses. These fortifications were used for observation and communication during wars.

Which Section is the Best to Visit?

It depends on your needs!

Mutianyu section is the most child-friendly and it is also accessible to wheelchair users.

For those who want to visit the most famous section of this fortification, the Badaling section is a must-visit place.

While if visitors are intended to enjoy the view with fewer crowds, they could choose the relatively less popular sections but also with splendid scenery, such as Mutianyu, Huanghuacheng, Jiankou, and Simatai sections.

Get more information on the Best Sections of the Great Wall.

What Is the Best time to visit the Great Wall of China?

Spring (April to May) and autumn (September to October) is the best time to visit the Great Wall of China.

They are the ideal seasons to visit this great fortification. The temperature of those periods is either too hot or too cold and leads to quite amazing scenery at the same time.

What is the Current Preservation Situation of This Fortification?

The section that we see today, winding up and down for about 6,700 kilometers from Jiayu Pass in the western desert (in Gansu Province) to Shanhai Pass on the eastern seashore (in Hebei Province), is mainly the remnants of the Ming-dynasty renovations.

Though the existing Great Wall still stretches to 13,171 miles, this whopping figure actually represents only two-thirds of the wall’s original span. Sadly more of the in Gansu Province is predicted to have disappeared by 2040, due to the effects of natural weathering and erosion.

Can we See It from the Space?

To this day, many people believe the claim that the Great Wall of China can be observed from space. The idea was first voiced in 1754 by an English scholar named William Stukeley in his family memoirs. Later Henry Norman, a journalist, pushed the myth to popularity.

According to reliable data collected from space, one can by no means see the Great Wall from there, much less from the moon. Even in low orbit and with perfect weather conditions, only those with excellent eyesight may make out an obscure outline of several sections of The Wall.