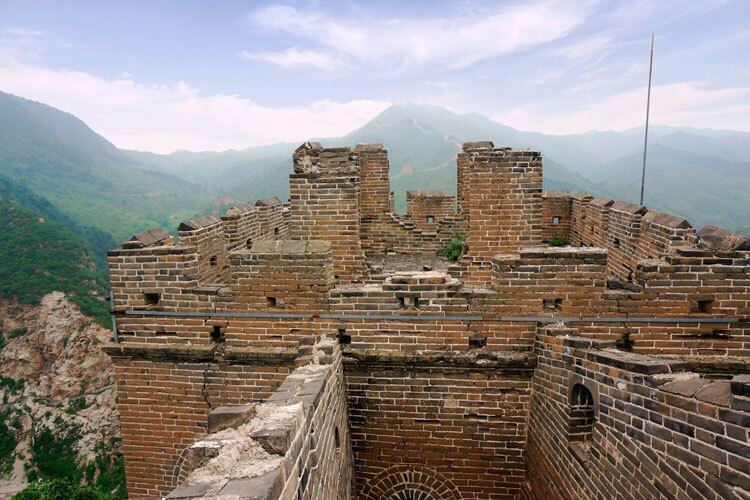 History of the Great Wall

History of the Great Wall

The construction of the Great Wall took over 2,000 years, from the 7th century BC to the 16th century AD, involving more than 19 dynasties.

You will know when you browse this page.

However, the person commonly assumed to have begun the work of building the Great Wall, is the first emperor of the Qin dynasty (221 – 206 BC). In actual fact, the Great Wall of China began to be built long before the household name of Qin Shihuang launched the Ten-Thousand-Li-Long Wall during his reign.

It is well-documented that the oldest sections of the Great Wall were actually built amid incessant wars in the Pre-Qin Period (7th century – 221 BC). More specifically, the periods referred to are the Spring and Autumn Period (770 – 476 BC), and the Warring States Period (475 BC – 221 BC). During these eras, the major regimes changed frequently, because the royal family of Eastern Zhou (770 – 256 BC) was in its declining years.

Against this backdrop, many contemporary rulers came to realize the need to build walls to protect their states. As a result, the earliest wall, the Chu State Wall, and the following walls of the states of Qi, Wei, Yan, Zhao, Qin, and Han, emerged.

However, differently from the Great Wall, we see today, walls at that time were erected by independent groups, on long stretches of terrain void of natural topographic fortification.

In 221 BC, Qin Shihuang, the first emperor of China, established the first centralized and unified state in Chinese history. He transformed the whole country from a loose confederation of feudal states to an authoritarian empire.

To protect his people from constant intimidation by the northern Huns, Qin Shihuang decided to erect an official Great Wall by linking the border walls of Qin, Zhao, and Yan together, and by extending them. Other sections of walls were mostly left abandoned, and gradually eroded or were dismantled over time.

Since the Great Wall is still unparalleled in scale and length today, it is easy to imagine the unprecedented difficulties its workforce was confronted with at the time of its construction. It took about a million workers 9 years to accomplish this fantastic achievement, which stretched from Lintao (today's Minxian County in Gansu Province) to Yalu River in Liaoning Province. The Wall unfortunately also provoked tremendous discontent among the Chinese public, because of the merciless pressure from Qin Shihuang to complete his wall.

After the death of Qin Shihuang, the Qin dynasty was soon overthrown by peasant uprisings due to Qin’s tyrannical rule. Power was handed over to a man named Liu Bang, who established the Han Dynasty.

In the following years of the Han Dynasty, Liu Bang and his royal descendants had Qin’s achievements restored, and further extended his wall. It is said that Han’s Great Wall has the longest fortified length of about 7,000 miles, stretching from the North Korean coast near Pyongyang in the east of China, to Jade Gate Pass in western China.

Meanwhile, the overall arrangement of Han’s Great Wall was improved by erecting a lot of embankments, beacon stations, and forts, to form an effective defense system against attacks. Apart from fending off raids from northern peoples, the Wall also helped open up wastelands in the western regions and protecting the ancient transportation artery that snaked inland towards Central Asia - the Silk Road.

With the decline of the Han Dynasty, there appeared numerous small and less powerful regimes, including North Wei, North Qi, East Wei, and North Zhou. Each made great contributions to the construction of the Great Wall, especially North Wei and North Qi.

The North Wei Great Wall was divided into two parts. One started from Juyong Pass in Beijing to Shanxi Province. The other stretched from Hebei Province to the Inner Mongolia Autonomous Region.

The era of upheaval came to an end when Emperor Wen Yang Jian established the Sui Dynasty. According to historical records, there were up to seven renovations of the Great Wall in the Sui Dynasty. Though this number is quite high, most of the work conducted by the Sui Dynasty was for the sole purpose of restoring the existing structure of the Wall, rather than adding any new fortified lines.

As one of the most powerful feudal empires in the contemporary world, the Tang Dynasty presented an unprecedentedly harmonious scene of ethnic blending and development. Therefore there was no extensive construction on The Wall for the next several hundred years.

The year 960 brought with it the start of a new dynasty - the Song dynasty. Though the Song Dynasty gradually unified the country, its domain was no longer as large as that of the Tang Dynasty. This meant that the Great Wall was actually in the realm of Song’s rivals: Liao and Jin.

Even though the emperors of Song built several fortresses and fortified lines to defend themselves against their opponents, the walls they made eventually failed to fend off an assault conducted by the Jin people.

There were two sections of fortifications erected at this time (one snaking along the Greater Hinggan in Hei Longjiang Province for about a thousand li, and the other extending from Shaanxi Province to Hei Longjiang for more than three thousand li), mainly aimed at defense against the neighboring Mongol Empire.

However, this plan was carried out in vain.

The Yuan Dynasty was the first dynasty controlled by non-Han people. Since the rulers themselves belonged to nomadic tribes, the Great Wall thus lost its meaning as a defensive fortress. Besides, due to the Yuan Dynasty’s unparalleled power in the world, it did not need such a fortification and hardly carried out any work on the Great Wall.

The Yuan Dynasty ended in persistent peasant uprisings led by Han people. It was finally replaced by the Ming Dynasty, with Zhu Yuanzhang, a peasant leader, as its first ruler. Thanks to his peasant identity and experience of seizing power, Zhu particular attention to the construction of the Great Wall.

Over the two centuries of the Ming Dynasty, the building of defensive fortifications never ceased, and thus the scale of the project became unparalleled in history.

In actual fact, most sections of the Great Wall we see today are the legacy of the Ming Dynasty, including the best-preserved sections of Badaling and Mutianyu in the northern outskirts of Beijing.

In 1644, the Manchu people broke through the Shanhaiguan Pass and overthrew the Ming Dynasty by establishing the Qing Dynasty(1644 - 1911), another dynasty controlled by non-Han people. Since then, the long history of the construction and renovation of the Great Wall by feudal dynasties has finally come to an end. The last feudal dynasty- the Qin Dynasty - had full confidence in its power and seldom restored or extended the Great Wall.

In 1957, the government of the People's Republic of China renovated the Great Wall and opened it to the public.

Back to the Great Wall of China