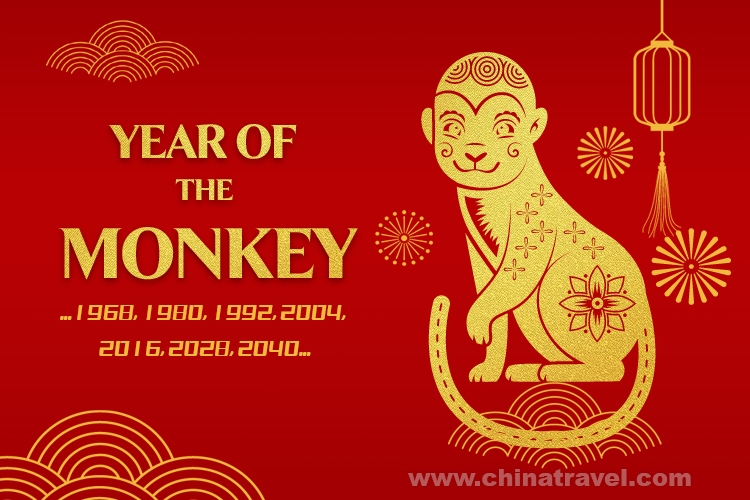 Year of the Monkey

The Chinese zodiac monkey years come every 12 years as a cycle.

In Chinese element theory, each zodiac sign is associated with one of the five elements: Gold (Metal), Wood, Water, Fire, or Earth. The most recent Monkey year is 2028. It is the year of the earth monkey.

Chinese zodiac years are based on the Chinese lunar calendar which is around one/two months later than the Gregorian calendar. The Chinese New Year marks the transition from one animal to the next.

People born in a Monkey year are ambitious, smart, and versatile. They have a natural curiosity; they like to explore. Learning things quickly, enable monkey people to understand what is happening and then make the right decision.

Monkeys are social people. Being talkative and full of energy, they are also master of harmless practical jokes. They like to be in the limelight.

Some Monkeys are also capricious, self-indulgent, immature, and petty.

Women born in the year of the monkey are patient, they listen. However, they are usually unwilling to express their affection. They are a bit conservative about relationships and marriage. Female Monkeys often miss good chances to find the right person because of their shyness. But if they are involved with the right person, they will value him.

Thanks to their optimistic trait, men born in the monkey years always win popularity among women. Love is treasured in their eyes and they believe in soul mates. Those who fall in love with male Monkeys will feel satisfied. Monkeys are not only loyal partners, but they can give up important things to make a relationship work if there is something wrong in the relationship.

However, they sometimes feel insecure about the future. Try to comfort them especially when they share their feelings.

Five Elements of the Monkey

In Chinese elements theory, there are five elements: Gold (Metal), Water, Wood, Fire, and Earth. Each zodiac year is associated with an element. Years with the same animal sign and element repeat every 60 years.

Read more details on the Five Elements of the Zodiac Monkey.

People born in the year of the monkey are thought to be emotional and talkative. Although Monkeys always make jokes about others, most of the time they have no malice.

Rats and Monkeys are both intelligent, resourceful, and a little shrewd. They can complement each other, but sometimes their small tricks may hurt each other.

People under the monkey sign are ambitious, they need strong support. Dragon is confident and aggressive. Monkey people are compatible with dragon people, they can help each other in both work and life. They will become good friends and business partners.

It is difficult for Pigs and Monkeys to live together, only to end in arguments because they have clashing personalities.

Minor illnesses may occur, and regular exercise will help. If elderly Monkeys develop a cough, they must go to a hospital. Monkeys will get irritated easily so should try to maintain a peaceful mind. They must be aware of traffic safety.

2023 is a good year for Monkeys' careers. Monkeys have a good chance to become well-known. They have a special sense that helps them to hammer away at a problem. Their intelligence and charm make them successful.

It is important that Monkeys should concentrate on developing certain skills that will help them in their careers.

Monkeys can make a fortune this year. But do not show off the wealth, even if making a great fortune. Making a budget before spending is helpful. Monkeys should avoid gambling and speculating, which may cause them to lose everything they have gained. When lending money, they should be cautious.

Monkeys' relationships will be favorable. Single Monkeys have a great chance of finding the right partner at the end of this year. Married people will be in a stable stage of their relationship with active love life.

Monkeys are attracted by romantic people. At the beginning of a relationship, they are sensitive so they often act like a child, small mistakes will deter them.

Read more on Monkey's Horoscope in 2023.

Follow the lucky things and avoid these unlucky ones, it may help you have a smooth 2023.

Famous People Born in the Year of the Monkey

Listed below are all the 12 zodiac animals with detailed information, check out which animal sign you belong to and get lucky in 2023!