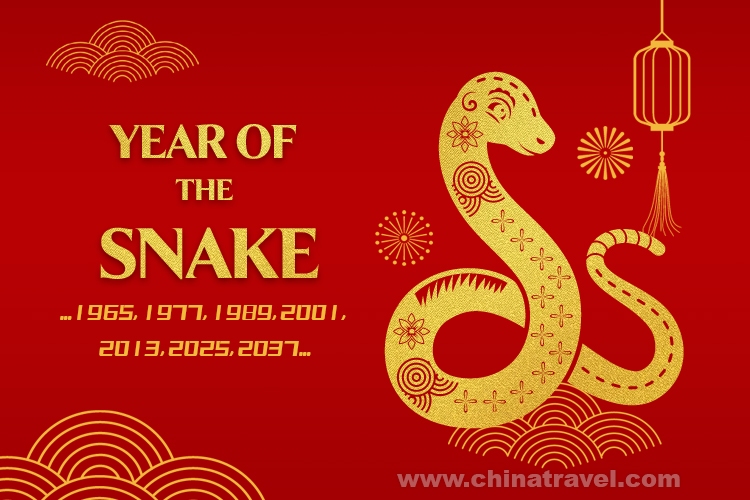 Year of the Snake, Chinese Zodiac 2025

In Chinese culture, the snake is a symbol of intelligence, wisdom, and charm. That is why people believe the people born in the year of the snake possess these personality traits.

The Chinese zodiac Snake years come every 12 years as a cycle.

Chinese zodiac signs are based on the Chinese lunar calendar, which begins on the Chinese New Year.  In Chinese element theory, each zodiac sign is associated with one of the five elements: Gold (Metal), Wood, Water, Fire, or Earth.

Find below the luckiest things for snakes. Following the lucky things and avoiding the unlucky things will bring you good luck.

People born in the year of the snake appear cold and mysterious on the outside, but in fact, they are warm and kind on the inside. Most snakes are natural artists who are good at literature and arts, like Goethe and Picasso.

Snakes are ambitious.  Most of them can work hard to achieve their goals.

However, snake people are jealous in a relationship. Their suspicion might make them paranoid.

Male snakes are jealous which makes it hard for them to get well along with others. Most of them are ambitious and tend to get what they want by whatever scheming method.  They are in a great desire for fame most of whom are in the pursuit of wealth and fame all their life.  Male snakes often show off what they own which sometimes embarrasses others.

Male snakes are sensitive. They are constant in the relationship and will be loyal to their partners all their life.

Men born in the snake years are energetic and aggressive.  They like to work independently and refuse to cooperate with others. They can always achieve their goals with their strong ability. But, sometimes, failing in cooperation may bring problems to their work.

Women born in the year of the snake are fashionable. They usually spend a lot of money buying the most fashionable clothes and jewelry.

They crave wealth and power very much. If they can't obtain the wealth they are expecting on their own, they will try to marry a man who possesses that.

Generally speaking, female snakes are good wives who are willing to help their husbands in every aspect. It is very probably their husbands' careers will reach a high stage with their help.

In Chinese elements theory,  each snake year is associated with one of the five elements: Gold (Metal), Water, Wood, Fire, and Earth.

Chinese people believed that personal characteristics are decided by both animal signs and elements. Snake people born with different elements have different personalities.

Read more details on the Five Elements of Zodiac Snake.

Chinese zodiac match was used to find one’s best partner in love in ancient times. To the zodiac snakes, they are most compatible with the Ox and Rooster.

Snakes and Ox people are both willing to work hard for a better life. Though they have different personalities, they can complement each other. The Snake will respect the persistent Ox and offer warm support during hardships.

Snake people and rooster people have a lot in common. They are both passionate but also scrupulous about the relationship. The Rooster is naturally optimistic and can help its partner build up confidence when they suffer from failure.

Tiger people and snake people can't open their hearts to each other. In the tiger's eyes, the snake is cold and shrewd, while in the snake’s eyes, the tiger is overbearing. However, communication is the key to grow up a genuine friendship.

Snake people will have an average fortune in 2022. They may encounter some twists and turns. But, all the problems and hardships will be solved with help from their friends.

People born in the Year of the Snake will meet many changes in their careers this year, they should make be prepared. Though there are may some tough tasks confronting them, they can solve them with support from their friends.

The snake people who run their own businesses may have good opportunities to perform well for their enterprises this year.

You will perform well in your work, hence may have the opportunity for a salary rise.  . At the end of the year, apart from the stable income from work, you may get good returns from your investments.

However, you need to have good money management because the chances for you to encounter difficulties are high this year. So you should spend money wisely.

Though there are ups and downs, Snake people can have a good relationship this year.

The chance for them to have divergence and arguments with colleagues is high. This can affect their mood. So, it is suggested that snakes should stay calm. Also, they need to spend more time with their families to avoid alienation from them.

For the single, the love story may start by chance.  Single snakes may meet their loved ones this year.  The person can be their ideal soul partner.  So, just pick Mr. Right and enjoy this romantic relationship.

Snake people need to pay more attention to their health conditions in 2022. They are likely to be fatigued and suffer from insomnia.  Work stress this year may cause mental disease.

To minimize health-related problems, people born in the year of snake should keep the following things in mind:

Is a Snake Year a Lucky Year

To most snakes, the snake year is an unlucky year. The next snake year will come in 2025, people born in the snake year should be careful that year. The way to protect yourself from bad luck is to wear red clothes such as red underwear. read more on how to be lucky in your zodiac year.

Famous People Born in the Year of the Snake