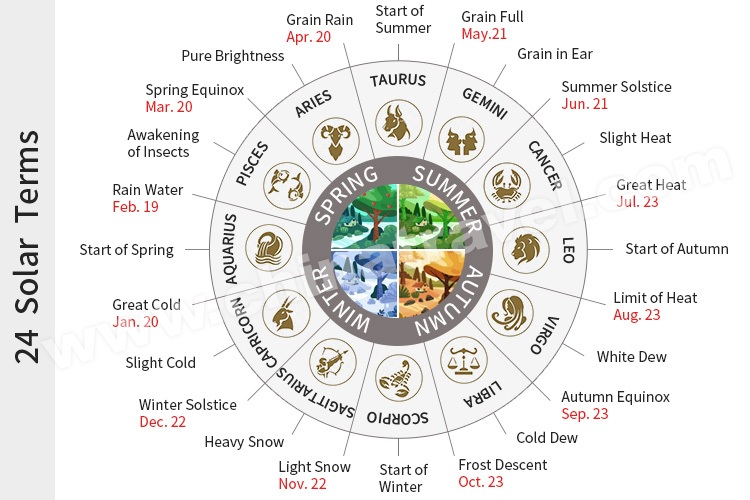 The 24 Solar Terms were developed by farmers in ancient China through observation of the sun's annual motion.

These terms are used to mark the seasons, weather, and natural variations. The year is divided into twenty-four equal periods. This thus provides a time frame for farmers to plan crop production and farming as well as daily life and festivals.

Solar Terms are divided according to the sun's annual motion in the ecliptic plane (the Earth's orbit around the Sun). It is part of the traditional Chinese calendar zodiac.

The 24 Solar Terms were inscribed on the Representative List of the Intangible Cultural Heritage of Humanity by UNESCO in 2016.

Eight key solar terms were established according to the moving position of the sun and the moon at the beginning and middle of a month, and the climate and natural phenomena.

During the Western Han Dynasty (206 B.C.-24 A.D.), the twenty-four solar terms were completed and officially designated; most of them refer to the climate of Xi'an, the capital of the Han Dynasty.

The complete 24 solar terms are integrated into the Gregorian Calendar. And it continues to be used today.

This illustrates the wisdom of the Chinese in dividing the seasons. They influence commerce and the livelihoods of the people. These livelihoods contribute to basic human necessities (housing, food, clothing, transport) and play an important role in daily life.

Spring Equinox, Autumnal Equinox, Summer Solstice, and Winter Solstice reflect the turning point of the changes in the altitude of the sun.

White Dew, Cold Dew, and Frost's Descent embody the course and degree of the gradual decrease of temperature.

Grain Full, Grain in Ear, Awakening Insects, and Pure Brightness reflect the natural phenology phenomenon (the study of the timing of the biological events in plants and animals).

The Start of Spring is the first solar term on the Chinese lunar calendar. It is usually around February 3rd, 4th, or 5th during the period of Chinese New Year (Spring Festival), and marks the beginning of the spring season.

Pure Brightness is not only a solar term but also a traditional festival, Qingming Festival. It is also known as Tomb-Sweeping Day (清明节 qīng míng jié) and has been celebrated in China for centuries. The day is meant to commemorate and pay respect to a person's ancestor.

Winter Solstice marks the first official day of winter. The solstice happens at the same time in every place on Earth. It's when the sun on the sky's dome reaches its farthest southward point for the year.

At this solstice, the Northern Hemisphere has its longest night and shortest day of the year.

Winter Solstice Festival (冬至 dōng zhì) also referred to as Winter Festival or Dongzhi Festival, is one of the most important festivals in China. It falls on December 21st or 22nd. The date is dependent upon the tilt of the Earth.

It's winter in the Northern Hemisphere when the South Pole tilts toward the Sun. The origins of Winter Solstice can be traced back to the Yin and Yang Philosophy of Balance and Harmony in the cosmos.

Traditionally, Winter Festival is a time for friends and extended families to socialize and enjoy delicious foods. The kinds of foods eaten during festivals vary from region to region.

Dumplings (饺子 jiǎo zi), sometimes dipped in a small bowl with a mixture of vinegar and soy sauce before being eaten, are a popular and essential food for many people in Northern China.

While in Southern China, it's customary for families to make and eat Tangyuan (汤圆 tāng yuán) during Winter Festival.

In other regions of China, people eat hot foods to celebrate Winter Festival and to stay warm!

For example, Mutton Paomo (or mutton soup) is a popular food eaten in Xi'an, home to the Terracotta Army. It's a spicy soup made with slices of mutton and small peanut-sized hunks of unleavened flatbread, often eaten with noodles.