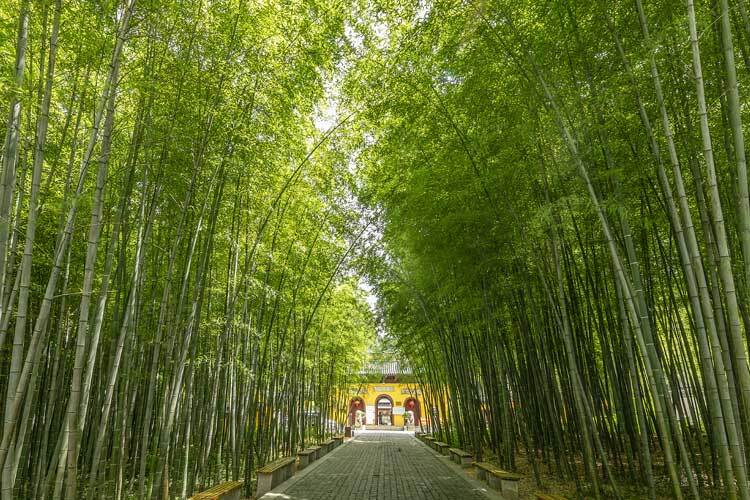 The Chinese love bamboo and bamboo culture have already been rooted in their minds for a long history. To the Chinese people, bamboo is the symbolization of virtue. It reflects people’s souls and emotions.

China is well known as the Kingdom of Bamboo. China grows 400 species of bamboo, and one-third of all known bamboo species in the world are grown in China. China has the largest bamboo planted area, and the area that produces the most bamboo in China is the south Yangtze River area, a very popular destination among tourists from all around the world. Bamboo is mostly produced in South China, including the regions like Sichuan, Chongqing, Anhui, Zhejiang, Fujian, Hunan, Guangdong, Jiangxi, and Jiangsu provinces, as well as the Guangxi Zhuang Autonomous Region.

The history of Chinese people planting and using bamboo can be traced back to 7,000 years ago. As early as the Shang Dynasty (16th-11th century B.C), bamboo was already used in various aspects of ancient Chinese people’s daily life. It was used for food, clothing, housing, transportation, music instruments, and even weapons. Before the Eastern Han Dynasty (25-220) when paper was invented, strips of bamboo had been used as the most important writing medium, more widely used than other materials, such as silk, animal furs, and rocks. China’s first books were crafted from bamboo strips strung on the sting. Thus bamboo played an important part in the daily life of ancient Chinese people, and its role as a writing medium kept the history records and traditional Chinese culture for us to study today.

The Spirits of Bamboo Culture

Bamboo has the title of "gentleman" among other plants. As a symbolization of virtue, bamboo is always closely related to people of positive spirits. A famous Tang Dynasty poet Bai Juyi (772-846) summarized the merits of bamboo according to its characteristics: its deep root denotes resoluteness, straight stem represents honorability, its interior modesty, and its clean exterior exemplifies chastity. Bamboo culture always plays a positive role in encouraging people to hold on when facing tough situations.

Throughout history, bamboo has given inspiration to many artists. A large number of artist works have been made on the theme of bamboo, including poems, paintings, and music. There are lots of legends and stories deriving from bamboo culture.

According to the legend, during the reign of Emperor Shun (an emperor of the far ancient age of China more than 2,000 years ago), there are nine evil dragons on the Jiuyishan Mountain of Hunan Province. Emperor Shun decided to help his people kill the evil dragon when knowing that people were suffering from the disasters brought by the evil dragons.

Ages passed, Emperor Shun did not return. His two wives, Ehuang and Nuying were worried about their husband. They decided to go to Hunan to look for Emperor Shun. They were told that Emperor Shun died of overwork at killing the dragons. At hearing the sad news, their extremely sad tears of despair came out. The tears fell on the soil by the Xiangjiang River, and bamboo growing on the river bank was stained. There are something like fingerprints on the bamboo, and people said they are the fingerprints left by the two imperial concubines when wiping their tears. The red mottles on the bamboo came out from the blood of the tears.

Mengzong, a scholar in ancient China, was a filial son who loved his mother so deeply that one of his stories was listed in the book "24 Stories of Filial Piety" (the book keeps the records of 24 touching stories of filial people in ancient China).