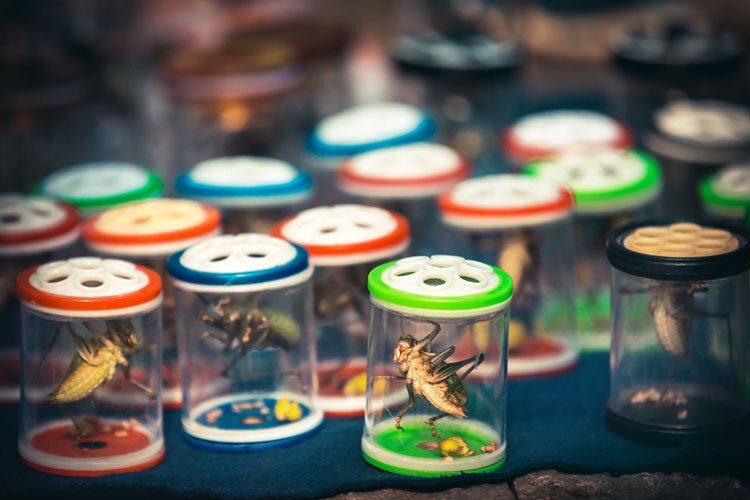 Crickets are a key component of Chinese traditional culture. The tradition of favoring singing insects and fighting crickets has ancient roots and has been handed down throughout the generations to the present day.

This persistent tradition to rise or collect crickets for fights or purely for the enjoyment of their song has deep cultural roots. Cricket is moreover considered as a lucky charm symbolizing longevity in China. It is the custom to offer one, when someone is moving into a new house, for example, or to carry one in a small box to attract happiness. Very appreciated by men of letters, it arouses the poetic inspiration, which explains that they are still on offer, in some calligraphy and painting shops, in small braided bamboo boxes.

From the Chun Qui period (770-476 B.C.) crickets were kept as symbols of luck and auspicious virtue. Whenever autumn arrives, the ladies of the palace catch crickets and guarded them in small golden cages, which were placed near their pillows so as to hear their songs during the night. This custom was also mirrored by common people.

Cricket in China encompasses a 2000 year history of both singing insects and fighting crickets. Chinese see in the cricket an emblem of the cycle of life, death, and resurrection: the living thing buries its eggs in the ground, lives there in the form of larva, and gets out of it transformed into an insect.

The fact that crickets are able to lay hundreds of eggs was in line with Chinese beliefs that the most important ingredient to success in life was to have as many children as possible and was thus elevated to the symbolism of thriving prosperity.

Chinese see it also as the symbol of moon phases. In the management of ancient Chinese agricultural practices, insects played a crucial role as they were often the best indicators of climatic change. Among the thousands of visible insects, the songs from singing insects make them the most obvious and noticeable. Ancient Chinese literature reveals a great number of farmer’s proverbs or popular songs relating to insects.

Crickets were primary only appreciated for their powerful tunes. During the Tang dynasty (618 – 906 A.D.), people started to keep crickets in cages and enjoy their songs while in captivity.

If in summer or in autumn their song has nothing extraordinary, in winter becoming rare it becomes precious. It is for the pleasure to hear them sing that some Chinese people buy them. From November to January it is the high season for the cricket business. As a symbol of autumn, they are become associated with loneliness, sadness, pity for the fate of mankind and are thus used prolifically in Chinese poems.

It is under the Song dynasty (960 – 1278 A.D.) that certain species were carefully selected and cricket fighting flourished as a popular sport.

They were preserved in gourds or cages specially designed for that purpose and many well-written essays and poems account for these vivid cricket battles and the exhilaration displayed by the witnessing audience.

Realized in bamboo, cloisonné, bone, or braided bamboo, some cricket cages look like real artworks. A very special Chinese art of handcrafting containers of varying characteristics was born with the requirements of keeping the singing insect pets in captivity.

The most popular of all materials used to construct singing insect containers has to be the gourd. The gourd is an auspicious material and was linked to the Taoist search for paradise.

From the beginning of the Song dynasty (960 – 1278 A.D.) onwards, there are many historic references regarding the use of crickets within recreational fighting events. If you are used to seeing boxing competitions, you are certainly not used to seeing cricket fights! The Chinese like this sport! When autumn comes, crickets’ sellers walk around everywhere. Formerly, the amateurs were going themselves to catch them in the countryside; they took care with attention so that this autumnal activity could last all the season.

With the same popularity that football enjoys today, cricket fighting became a popular game and sport for all people, from adults to children. The fight is only made between males, in a jar or, nowadays, in a sink. The fight must be fair; both crickets have to be of the same weight. They are weighed with a small balance before fighting! China even knew some emperors amateur of crickets fights!

Cricket cage match, China holds cricket fighting championships. Crickets are fed with a mixture of dough of bean and some water following a diet rich in proteins and regular training; All this to get ready for the National Championship.

The traditional fight involves two crickets that are in a confrontation in a boxing ring. The battle requires that the owners titillate their insects with a piece of hay or a small stick to irritate them. A judge removes then the separation between both crickets in the boxing ring and the released insect's fight with each other. The judges follow a set of guidelines and of strict rules to determine the points of the match, among which most of them date back to the 13th century,

The noisy chirping indicates when crickets are considerably irritated, but to invite them to the fight is not easy. Points are then counted according to the aggressiveness of the cricket which allows overcoming the other one. The matches rarely drag mortal wounds to insects.

Crickets have a short duration of life, not exceeding 100 days. The biggest competition in China takes place when crickets hit the highest point in autumn. Some years, more than 20 teams of various provinces throughout the country participate in the championships for two days.

Cricket fighting is widespread although mainly found in the large cities of Shanghai, Beijing, Tianjin, Guangzhou, and Hong Kong. There are cricket fighting clubs and societies that cater to members’ interests at all levels of intensity. With the migration of Chinese to other parts of the world, cricket fighting can be found in New York and Philadelphia, although the species used to differ.

The availability of these insects persists to this day. Photographs depict a thriving market for singing insects taken recently from the insect market in Shanghai. From the end of May through the end of July, peddlers, found in food markets and along streets, sell hundreds of singing insects.