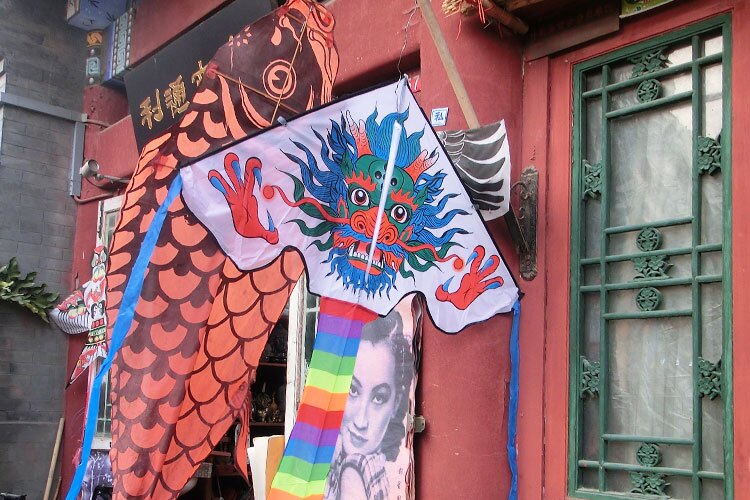 Kites and China, a combination contested by others but for most of the civilized world, is a rather obvious connection. The history of China, spanning thousands of years has always been a witness to the contributions of unknown Chinese artisans for their contributions. More than just a pretty thing in the sky, Kites have served China in a number of ways and inspired a generation of innovators and engineers to make the impossible, possible.

The history and legacy of Chinese kites have been and will always be connected to resilience, innovation, and quality. That is why Modern China has taken the kite to a much higher level with its special museum, upholding the heritage of the Chinese for top-notch craftsmanship. Your trip to China will not be complete without the seemingly customary tradition of visiting key cities and destinations to really explore the history, craft, and culture behind the decadent Chinese Kites.

Way before Benjamin Franklin popularized the Kite test to understand the nature of electricity; the Chinese have already been using kites beyond pleasurable and serendipitous purposes. From crazy tests for travelers, unique tools to scare off enemies, and superstitious and healing benefits, the history of kite and kite flying in China is truly an incredible journey to the rich and beautiful part of this majestic country.

With thousands of years of historical context just waiting to become uncovered, who knows what the facts are waiting to be unearthed? The most important thing is that the heritage of kites and kite flying never stopped.

The Kite and Its Humble Beginnings

Written documents about kites date to 478 BC when a Chinese Philosopher named Mo Zi spent creating a wooden Hawk figure that could fly. The account was taken from a Mozi text, whose principles are still very much present in modern times. One unique story was of a man whose hat was blown off by the wind and he caught it by the neckband, allowing him to prevent it from getting carried further, giving it a hovering effect.

In some stories, efforts were being made to make banners for officials to be more visible for the people to read so bamboo was used to strengthen the structure and had it blown away, flying like the sails of a boat. There is validity given that sailboats have been around in China more than 3000 years ago, before the first recorded creation of the kite.

In 200BC, General Han Hsin used the kite in order to fly across the castle walls that he was trying to take siege.

Another account was of a General who was under siege this time. He used the kites with harps fitted to them and then it was flowing across enemy camps. At night, the wailing sounds of the harp across the sky were a sign that the defeat is on their side, making the enemies flee of fear. There seems to be validity to it since kite, in China is also known as Fen Zheng (Wind+ Harp).

Emperor Wudi of the Liang Dynasty was surrounded by Hou Jing rebels at Taicheng Nanjing, the Emperor ordered a kite to be used and served as an SOS signal to get help.

During the Tang Dynasty, bamboo strips were placed on the kites, and as they vibrate, would sound like a stringed instrument. This recount has more validity than the harp story but there is always something interesting in Chinese stories that make it easier to mix interesting stories with historical facts.

In a more extreme account, it was said that Marco Polo saw that merchants who were planning on crossing the sea would first secure someone on a massive kite and if the kite flies, then the trip would be safe but if it falls down, the voyage would be perilous.

According to other historical accounts, kites were used to drive off personal bad luck by means of flying them and releasing the string. According to some, it wards off illness and bad luck, but a pleasurable experience nonetheless to see a kite flutter across the sky.

During the time when spirituality and superstitions are tightly knitted together, symbolism and other methods of presenting great gestures of healing were common. It is possibly true but kite-flying itself is a therapeutic activity and does expose the person to some sunshine, and fresh air.

The use of kites has become more elaborate, from simple, decorative, and recreational purposes to the more unique, functional uses by the military, the innovations have also improved. With the use of silk, paper, lightweight bamboo, and complex constructions, the kite has become a symbol of Chinese innovation, a source of inspiration for modern aircraft, and an art form that truly strikes as incredible.

Though the Egyptians built Towering Pyramids and statues, the Chinese were able to explore the sky and touch the clouds using their creative minds with a lovely kite.

Why Kite So Important in Chinese Culture

Kites were very important to the history of China. The country has always been regarded as the origin of kite making and kite flying. Given this popular accolade, it is but essential to establish its historical legacy.

Nowadays, people go to China to celebrate not only its landscape and culture but also the amazing kites. The architecture behind kite making is still the same as it has been more than 2000 years ago and this makes China a true innovator, inspiring a lot of people, from artists to inventors in creating flying objects for commercial and industrial purposes.

Kites are core to the celebrations in China. Beyond decorative and festive looks when they fly across the sky, kites represent traditional Chinese cultures still surviving in modern times. Chinese are definitely great show producers with their lovely firecrackers, and colorful kites, with complex construction mimicking the looks and actions of birds, and other animals, even mythical creatures.

The cultural appeal of kites is very strong and when it comes to elaborate designs, the Chinese have always been regarded as top-notch. From light wood, bamboo, paper silk, and other materials, they are able to craft flying art pieces that appeal not only to the younger generation of China but also to the world.

Flying Kite is a Way for Pleasure

There is a fun and enjoyable experience learning to fly a kite and being able to maneuver the kite from the ground. Who needs battery-powered airplanes if pieces of string can do the trick? Kites have always been a fun summer activity when the winds are high and this allows a lot of people across the world to decorate the sky with colorful flying pieces.

The influence of China in kite making and flying has been brought to the Middle East, Europe, the Far East, and all corners of the world. The recreational value of kite flying always appeals to everybody and those who are not yet used to kite flying will definitely want to learn how to do it once they see these pieces in motion.

Flying Kite is Believed to Send off the Bad Luck

According to Chinese folklore, kites were created by ancient Chinese people to commemorate their dead loved ones and friends.

In fact, there are some festivals that still are alive nowadays, in which the Chinese send gifts to their dead loved ones or ancestors. For others, the appeal of kite flying is more spiritual wherein the person can put all negativity and bad luck away on the kite and when he or she flies the kite, all the negativity would have been taken away by the wind, increasing luck and improving health.

Military Use of Kite

Ultimately, with Ancient China, The kite was an important signaling tool, and it was even used as a diversionary tool. From distress signals to cautionary tools, kites became the first “long-distance” communicators that allowed the military to organize their troops from afar. It is even used for maritime purposes.

The Most Popular Types of Chinese Kites

Chinese kites have evolved in the last thousand years or so and it is divided into 6 main genres.They are Taiwan Kites,Jiangnan Kites,Nantong Kites,Tianjin Kites,Beijing Kites and Weifang Kites.Across these genres, 4 general forms emerge:

Centipede kites are the quintessential, iconic, and immensely popular kite forms used in China. These are complexly designed, segmented and lightweight kites that look like centipedes but with a dragon's head. The body is also adorned with feathers, giving it an ornamental, impeccable design.

The Chinese centipede kites are 3 dimensional with the dragon's head but the flat, disk-like body allows it to move in the air gracefully. When flown in the air, the centipede kite looks magnificent, like a mythical creature flying across the sky.

From a distance, the beauty of the dragon kite definitely offers incredible beauty in any event.

Hard Winged kites are normally representing winged animals, from insects to birds. The structure of these kites consists of a bamboo central structure with symmetrically arranged bamboo to the sides. Silk is glued onto the structure, creating a structure similar to sails. The most popular rigid kite is the Yangjiabu kite.

Normally, the kite is also ornately painted, giving it a lovely texture especially if the size is significantly large. Richly ornamental kites normally take the form of the hard wing categories and you will definitely love its impeccable appeal.

Soft Winged kites on the other hand only have rigid upper rims. The lower section of the kite is flexible, allowing the material to move and flow along with the wind. A giant goldfish kite would be a perfect example, with a solid central structure and its fins are more flexible. Creating the look like it is floating and swimming into the celestial sky.

There is something poetic about the flow of soft winged kites and they can also come in a wide range of designs, from birds, insects, and fish to other mythological or cultural symbols.

Flat kites are the quintessential, basic design of a kite that can take a lot of forms, normally diamond or square-shaped. These are the basic, beginner's kites since they are easy to fly.