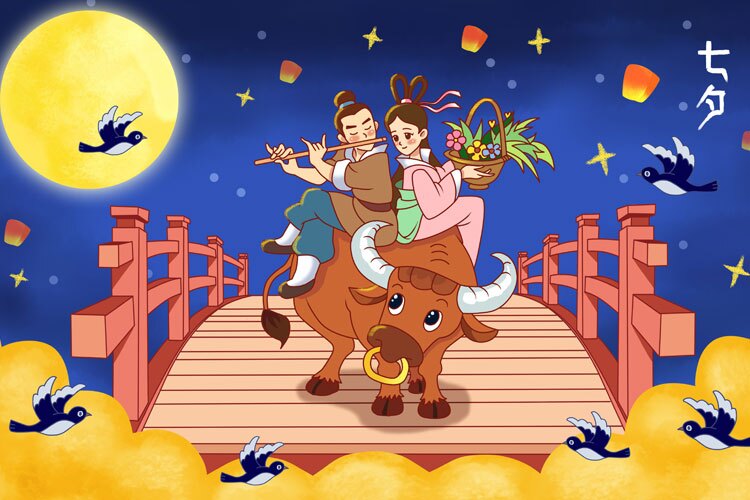 The Qixi Festival, also called the Qiqiao Festival, is celebrated every 7th day of the 7th month according to the Chinese lunar calendar. The festival is known as Chinese Valentine's Day. It is the most romantic festival among traditional Chinese festivals.

The Qixi Festival is observed on the 7th day of the 7th lunar month on the Chinese calendar. The date on the Gregorian calendar changes every year. In 2022, it falls on August 4.

Qixi Festival Traditions - How to Celebrate

Qixi Festival has been observed for over 2,000 years, dating back to a romantic legend. In ancient times in China, the Qixi Festival is very popular among young girls. There are also a lot of customs prepared during Qixi. However, many of the traditional customs are no longer observed.

1. Praying to the Weaver Fairy for Skillful Hands

On Qixi Day, the day when Niulang and Zhinü (the Weaver Fairy) reunite once a year, women in ancient times would prepare a table of offerings, including tea, wine, fruits, red dates, and peanuts to pray for skillful hands.

Single women also pray for finding a good husband in the future. And the newly married women pray to have a happy marriage.

On the evening of Qixi Day, there are a lot of activities. The most popular one was that girls threw a sewing needle into a bowl full of water on the night of Qixi as a test of embroidery skills. If the needle floats on top of the water instead of sinking, it proves the girl is a skilled embroiderer.

Girls would also display their needlework, and carve flowers and animals on melon skin to show their skills and celebrate the festival. Later at night, they would also compete with each other on threading a needle.

A popular snack that is cooked and eaten at the Qixi Festival is Qiaoguo, a fried delicate pastry of different shapes. It was made from flour, sesame, and sugar.

Nowadays, Qiaoguo is still popular in some areas in eastern China including Shandong, Shaoxing, and Shanghai.

Dyeing nails is a custom of the Qixi Festival in southwest China in ancient times. Girls pick balsam blooms then crush them up and combine them with alum. Then they would spread the paste onto each nail and then wrap the nails with leaves until they dry.

How Is the Qixi Festival Celebrated Nowadays

As time passed, more and more young Chinese people begin to celebrate this day as Chinese Valentine’s Day because of the romantic folklore. Youngsters celebrate it in a very similar way as that in western countries.

In ancient China, a young cowherd called Niu lang was an orphan and lived with an old cow. One day he came across a beautiful young lady, Zhinv, (织女, a weaver girl) the seventh daughter of Goddess, who was fed up with the boring heaven life and went to the earth for fun.

Soon the two youngsters fell in love with each other and got married without the Goddess’s approval. The Zhinv proved to be a wonderful wife and Niu lang to be a perfect husband. They lived happily and had 2 adorable sons.

However, the Goddess finally found out that her daughter, a fairy girl, had married a mortal. She exploded with rage and ordered the heaven troop to catch Zhinv back.

On earth, Niu lang was very sad but can do nothing. Suddenly his old cow began to talk and told him that if he killed it and puts on its hide, he might be able to go to heaven to find his wife.

With great sadness, Niu lang killed the cow and did as the cow told him with his two sons.

The Goddess knew it and was very annoyed. She took out her hairpin and scratched a wide river in the sky to separate the two lovers forever, thus forming the Milky Way between Altair and Vega.

But the magpies all around the world take pity on them. Every July 7th, they would fly together to form a magpie bridge over the stars, providing a way for the two lovers to meet for a single night.

Qixi Festival, which is originally known as Qiqiao Festival, originated from the Han Dynasty.

In the book of Xijing Za Ji written by Ge Hong, a famous doctor in Eastern Jin, there was the earliest description of the Qiqiao Festival.

In the past days, girls are the major part of participants in this festival, and the main activity during the festival is asking for a light hand (乞巧 qi qiao).