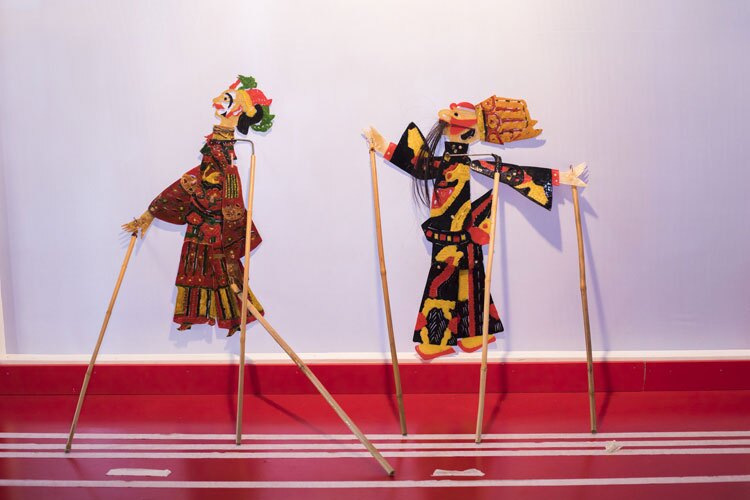 Shadow puppetry has been called the forerunner of modern cinema.

It is a dramatic form of storytelling in which silhouettes made of animal leather are projected onto a white screen. Human performers sing the tunes and words of the story. Meanwhile, he manipulates leather character puppets and light sources behind the screen.

The storytelling, usually a blend of Chinese history and culture and celebrated by children and adults. It is accompanied by fanciful music and combines the rich cultural history of China's songs and words. Opera, storytelling, fine arts, and history come together as one in the shadow plays.

The shadow puppets used are usually made of transparent plastic or the leather of buffaloes and donkeys. Talented Chinese artists carve intricate outlines of patterns on selected materials. They are then dyed in bright colors. The joints are made of light threading for flexible movement.

These transparent puppets come to life beautifully in the light against simple backgrounds and landscapes. Shadow puppetry is the product of a very traditional and well-known art form. Made by wise Chinese artists, their handicrafts are well known especially in the northern cities of China.

The music used is mainly composed of various stringed instruments as well as drums, flutes, gongs, and horns. Other local instruments are also used depending on the region in which they are played.

It is said that after the death of one of Emperor Wu's concubines, he was heartbroken and devastated. Shadow play has a history of over 2,000 years and first originated in the Han Dynasty (202 BC - 220 AD).

He even ignored state affairs. And he instead ordered his court officials to bring his beloved back to life.

To please His Highness, they came up with an idea to reshape the concubine with donkey skin. Her joints were animated using eleven separate pieces of leather. Her beauty was complemented by painted clothes. Using an oil lamp, they made her shadow move, bringing her back to life.

After seeing the shadow play, Emperor Wu and his heart began to recover. This love story is recorded in the book titled, “The History of the Han Dynasty."

During the Song Dynasty, shadow plays became particularly popular. By the time of the Ming Dynasty, there were 40 to 50 shadow play troupes in Beijing alone.

At the end of the 13th century, during the reign of the Yuan Dynasty, puppet shows became a form of entertainment and pastime for Mongolian troops at night in their barracks.

The Mongols swept across the continent and conquered Asia. They spread the popularity of shadow play entertainment to distant countries such as Persia (Iran), Arabia, and Turkey.

There is even an iconic old ballad from the Shaan Xi Province that describes what shadow play is:

One shadow play actor can tell thousands of years of stories,

Both hands can operate millions of soldiers.

In recent years, certain types of play and shadow performing arts are on the verge of extinction in many parts of China. As generations modernize, ancient traditions begin to fade into history.

But fortunately, shadow puppets are still alive. It is well preserved, especially in Huanxian County in northwestern Gansu Province. There are still more than 90 active shadow puppet groups. Local farmers formed these groups.

In 2003, this art form was named one of the first ten key preserved intangible cultural heritages in the country. The county is the birthplace of the Daoqing style of shadow plays, a classic and accessible style.

Daoqing plays involve only a single performer. He manipulates all the characters and conducts the orchestra at the same time. Shi Chenglin is a famous artist from Huanxian County. He has performed plays in more than 10 countries including Italy, Canada, and the United States.

Since 2005, the Huanxian County Shadow Play Troupe has staged more than 50 Daoqing Shadow Plays in over 20 cities worldwide.

In Italy, the popularity of the performances has soared. The audience members swarm to the stage following the performance. They were eager to find out what happens behind the screen.

Overall, these shows have generated strong and widespread interest among European audiences. They have won many fans for the traditional storytelling and art form.