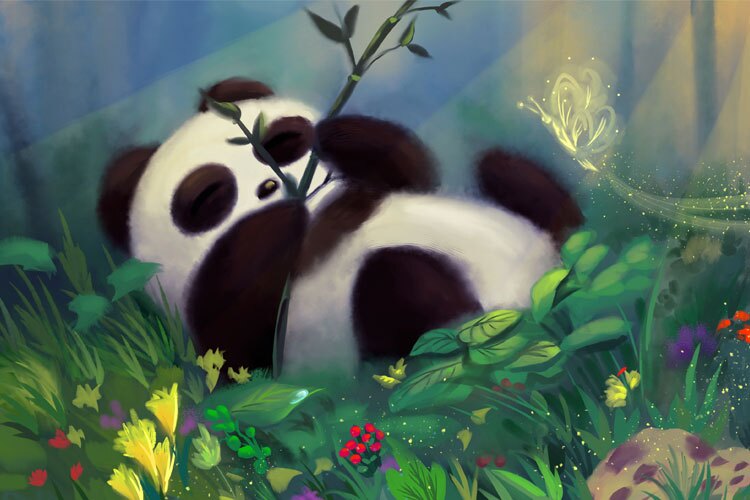 The newborn panda is so tiny about 150g, only 1/1000 weight of its mother. They are born helplessly blind (their eyes are "sealed") and toothless and pink-skinned with few hairs. They are so small and fragile that they easily die in the wild.

Baby pandas start to crawl at the age of 3 months. They need to suckle until 1 year old, but at about 6 months, they are ready for bamboo. After 6 months, they will grow very fast.

After about one and a half years old, the baby panda will leave their mother if she conceives as a panda. This is because giant pandas living in the wild only have the ability to take care of one child. Pandas are fully grown at about 4 years old.

After the Age of 7 -- Maturity & Reproduction

The panda family consists of Mama Bear and baby bear. As soon as Papa Bear mates with Mama Bear, he is completely out of the picture.

This means that the papa bear is just as useful to the mama bear and baby bear, at that point, as is a bicycle to a fish.

Although it appears that pandas live in this reduced nuclear family structure, they do occasionally have social contact with each other through communication.

That is, through vocalizations (they "talk back and forth") and scent trails that they leave in their respective "territories" (panda is not considered to be territorial, strictly defined, although, for all intents and purposes, the female with cub is), scent communicates with other pandas all the time.

Both males and females need to know them, so pandas do not live in complete nuclear family isolation.

The period of pregnancy is quite short, requiring only 3½–5½ months. When the time for the birth begins to near, the female instinctively builds a den.

In the wild, if a mother panda gives birth to two babies, only one of them is generally allowed to survive.

Because it is extremely difficult for the mother to feed herself and nurse two babies - the sheer logistics of it would be quite daunting, given the time demands that a giant panda infant makes on its mother.

Moreover, because the panda's diet is very fat-free. So it would be very difficult for a mother panda to convert the nutrients available to her into enough life-giving milk for one infant.

If you want to take care of cute pandas and close touch with them, it's good to take 1-Day Dujiangyan Panda Keeper Program with us.

Back to Giant Panda