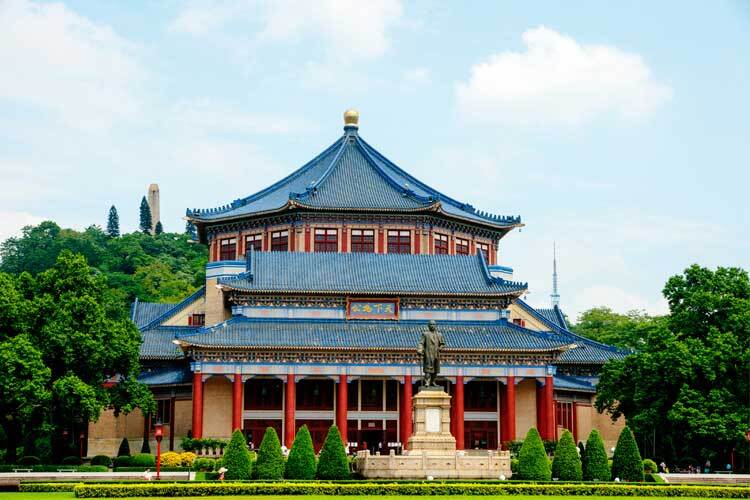 Known as "Goat City" and "Flower City", Guangzhou is located in southeast China, at the northern edge of the Chu Chiang Delta, close to the South China Sea, neighboring Hong Kong and Macau.

Guangzhou is famous for being an example of a comprehensive reform experiment area within China. It is not only the provincial capital of Guangdong Province, but also the economic, cultural, technological, and transportation center of Southern China. It is regarded as the Southern Gate of China.

As a true example of the city's desirability and prosperity, one of Guangzhou's other titles is "City of Overseas Chinese" because of the high number of overseas Chinese and foreign residents. According to statistics, there are 1.35 million overseas residents, including 520,000 overseas Chinese and Chinese with foreign nationalities from over 116 countries and areas. Furthermore, 830,000 Hong Kong and Macau citizens, and more than 1 million returned overseas Chinese and their families and relatives have been drawn to Guangzhou for business-related reasons.

In terms of sightseeing, Guangzhou is one of the most important tourism cities in China. One reason for its popularity is because it is located so close to Hong Kong and easily accessed. The city is richly endowed by nature and has its own unique flavor and entertainment activities as a result of its rich Cantonese culture. It has a flourishing service industry for business, trade, and domestic and international tourism.

Guangzhou is very famous for its history and culture. Historical documents state that the original city walls were established in 214 BC, meaning that its history extends more than 2,210 years. Legend has it that 5 immortals arrived in Guangzhou wearing colorful clothes and riding colorful immortal goats and the goats held ears of rice in their mouths. They presented the ears to the people and proclaimed Guangzhou would never have famine. Thereafter, Guangzhou was known as "Goat City" or "Sui Cheng", and "Wu Yang" (5 goats) became the symbol of Guangzhou.

As the third-largest city in China and an urban population of more than 4 million citizens, Guangzhou has many important cultural and historical sites that vividly reflect the development of its historical phases. The city was the starting point of the legendary 4,000-mile Silk Road which began during the Han Dynasty (206-220) and many relics still exist from that era. The trade route played an immeasurable role in international commerce in ancient times, and to this day, Guangzhou is one of the most important trade centers in modern China. Since China's opening up, the city has been a leader in promoting economic and cultural communications and developing a friendly relationship with foreign counties, establishing itself as an example of prosperity due to proper leadership in this area.

Looking back, Guangzhou is a city full of Chinese heroes, many of whom rose to significance during the revolutions in modern China, and a number of museums and statues can be found honoring their bravery and contributions. Sites such as Zhenhai Tower, Wuxian Taoist Temple, the Tomb of the King of the Southern Yue Dynasty, Chenjia Ancestral Shrine, Liurong Temple, Guangxi ao Temple, Huaisheng Temple, and Shishi are all of particular interest for visitors.

As well, the city's more modern history can be evidenced at Sun Yat-sen's Memorial Hall, Huanghuagang Mausoleum, Memorial Mausoleum to the Martyrs, Luxun's Memorial, the former site of the Peasant Movement Training Institute at Guangzhou, Sanyuanli Site of Revolt against the British Rulers, and the former site of Whampoa Military Academy.