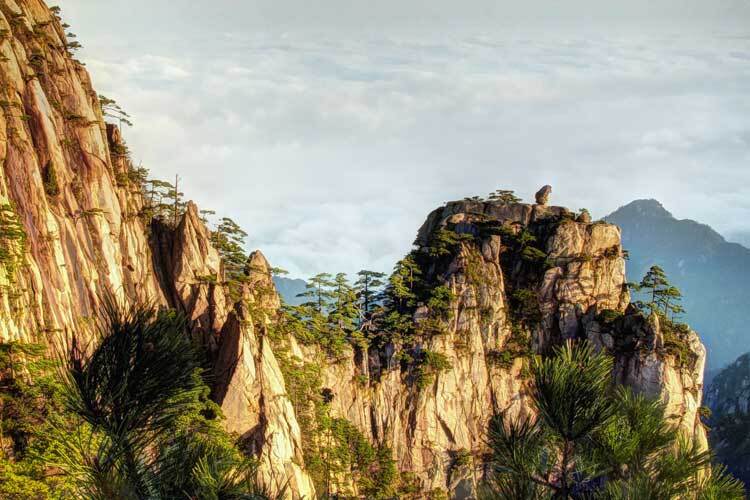 China stretches across a vast area covering many mountains, some of which are unspeakably spectacular while others are filled with rich cultural associations. The different types of mountains listed below are either among the most famous or the most beautiful in China.

Constituting one of China’s most famous and beautiful mountain ranges, Huangshan (黄山), or the Yellow Mountains, is famous for its spectacular scenery, the "four natural wonders":

1) Huangshan’s pines are found in various shapes and sizes, firmly rooted in granite. Some stand alone on peaks, while others hang downwards from the cliffs.

2) The many oddly-shaped rocks are famous for their strange appearance. They can resemble human beings or animals depending on the angle from which you look.

3) Clouds are like the clothing or seas of the Yellow Mountains, often making the peaks seem like variously large and small islands with stunning vistas.

4) The hot springs of the Yellow Mountains were renowned for the Yellow Emperor, the earliest ancestor of the Chinese nation, who bathed in the springs and grew younger as a result.

Huangshan’s views of sunset and sunrise are also not to be missed.

Mount Hua (华山) is famous for its natural steep crags and narrow paths. At a height of around 2,155 meters, Mount Hua's five peaks create its unique scenery.

Huashan has five major peaks according to different directions. The East Peak is the best place for seeing sunrise; the North Peak is famous for its sea of clouds; the South Peak is the highest peak of Mount Hua; the West Peak is a huge rock shaped like a lotus flower; the Middle Peak is at the center of the peaks.

The route up the mountain is known as one of the most dangerous hikes in the world for its many exposed, narrow pathways with precipitous drops. For example, the way from the North Peak to the South Peak is on a cliff face.

Mount Tai (泰山) is foremost among China’s Famous Five Mountains and has been regarded as a symbol of the Chinese spirit for over 2,000 years. Symbolizing power and peace in ancient times, dozens of emperors came here to worship heaven and earth.

Taishan is a mountain with a blend of Taoist and Buddhist culture. There are over 20 ancient building complexes and 2,200 historical relics in total. There are 2 must-see attractions on the mountain.

The first is Jade Emperor Peak, at the summit of Mount Tai, which offers tourists amazing views of the entire mountain, including Sunrise, sunset, and a sea of clouds.

The second is Bixia Temple, first built in 1008 and restored in 1770, which has a gilded bronze sculpture of a Taoist Goddess placed in its main hall.

Mount Emei (峨眉山) is one of the best-known summer destinations because of its pleasant weather, lovely natural scenery, and deep-rooted Buddhist culture.

At an elevation of 3,077 meters above sea level, the Golden Summit is the best place for viewing. The color of clouds changes from dark purple to red as the sun rises and peaks are surrounded by a fabulous sea of clouds. If you are lucky, you will see the rare Buddhist Light (a rare natural halo).

The Golden Buddha on the summit is the highest golden Buddha in the world and the first artistic design of the ten-direction statue of Samantabhadra. It has become a symbol of Mt. Emei.

Mt. Emei is a good place for seeing the autumn leaves. The mountain dons a golden-red coat in autumn when leaves change color across the mountain. The best places for appreciating the superb view are Wannian Temple, the Elephant Washing Pool, and the Golden Summit.

Jade Dragon Snow Mountain (玉龙雪山) is always sprayed with snow, so if you look from a distance, it looks like a silver-white dragon, which accounts for its name.

Ganhaizi is an open meadow at the east of the mountain where visitors can see the 13 snow-covered peaks of the mountain and it is the best place to look up at the whole of Jade Dragon Snow Mountain. There’s even a golf course with the longest fairway in the world.

White River is in a deep and serene valley with fickle colors. The water of the river seems white, as it flows over a riverbed of white marble. The river turns blue on rainy days. Besides, the shape of the valley resembles the moon, so it is also called Blue Moon Valley.

6. Mount Lu: Waterfalls in the Mist

Mount Lu (庐山) is another summer getaway in China and is renowned for its combination of streams, lakes, clouds, cliffs, and waterfalls.

The Three-tier Waterfalls (Sandiequan, 三叠泉) is one of the must-visits. As the name implies, a waterfall first falls upon a huge flat rock, then continues its fall onto a second rock, and finally lands on the bottom small lake, forming the interesting view of three-step waterfalls. With a drop of 155 meters, the three waterfalls appear quite different at different times of the year. They are vigorous in spring and early summer but become mere trickles in midsummer and winter.

Mount Lu is also a religious center, with six kinds of meeting-place (Buddhist, Taoist, Protestant, Catholic, Orthodox Eastern, and Islamic). There are churches, temples, and mosques in the vicinity, making it a good place for finding out about different religious cultures.

Mount Song (嵩山) is the birthplace of Chinese Buddhist Zen and the holy ground of Taoism. It is well known for Shaolin Temple, the birthplace of Wushu (i.e. Chinese Kungfu), and an excellent place for enjoying Chinese martial arts.

At a height of 1,491.7 meters, Mount Song provides beautiful scenery including peaks, valleys, waterfalls, water pools, and caves. The highlights of Mount Song include the Shaolin Temple; Shaolin Pagoda Forest (the largest pagoda forest in China); Songyue Temple Pagoda; the oldest cypress; as well as the earliest star observation platform in China.