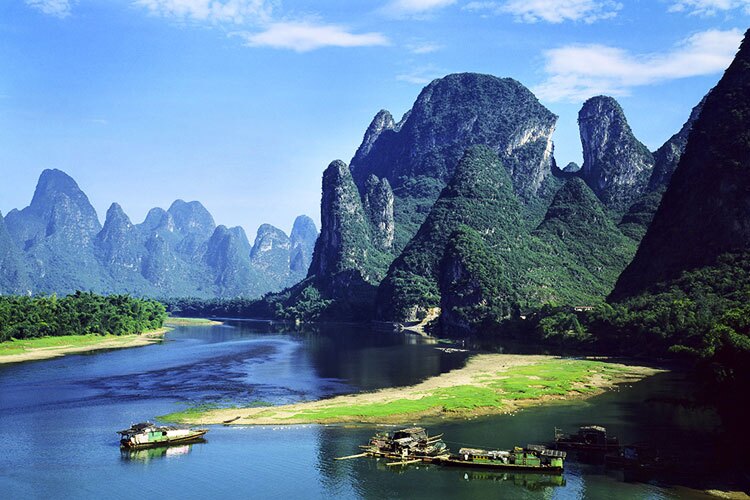 Guilin, with its marvelous limestone scenery, is absolutely not to be missed. The Li River, winding its way among crags and hills, creates a timeless beauty that seems to belong to a landscape painting. The Reed Flute Cave is amazingly impressive with lighting showing on stalactite and stalagmite. Biking in the idyll and tranquil countryside in Yangshuo and immerse as a part of Chinese painting-like scenery, is a paradise where carefree backpackers and others could relax and enjoy the magnificent surroundings.

As for the above recommendations, Guilin has a lot more to see and do, with its exotic culture and traditions, including nature parks, minority inhabit villages, and interesting outdoor activities as we list below.

Dominated by the limestone karsts that signify Guangxi’s landscape, the Li River (Li Jiang) is one of the most scenic and beautiful rivers in the country. The river flows for a total of 164 kilometers, starting in Guangxi province and going all the way to the Pearl Delta in Guangdong.

Cruises are available along with the Li, with one of the most popular being the ferry ride from Guilin to Yangshuo, highlighting the mystical beauty of the Karst Landscape. The 20 Yuan pictures the karst landscape, as seen from the Li River. The Li River Cruise can see sights such as Xianggong Mountain, Xingping Old Town, and traditional fishermen on bamboo rafts who use cormorants (large storks) to dive into the water and catch fish.

Reed Flute Cave is an enormous limestone Karst cave, named for surprisingly enough- the green reeds that grow outside it. The touring section of this cave lasts for about 500 meters, while the widest section inside is 93 meters, and the maximum height inside the cave is 18 meters. The cave is estimated to be 700,000 years old and includes sights such as the Crystal Palace and poetic inscriptions carved during the Tang Dynasty (618-907).

Longji (Dragon’s Backbone) Rice Terraces are the most famous rice terraces in China. Their construction began in the Yuan Dynasty (1271-1368) and continued into the Qing Dynasty (1644-1911).

The area is actually very large, encompassing several villages, terraces, and many sights. Besides the beautiful terraces, much of the accommodations are traditional bamboo housing, nestled right on the side of a mountain and offering beautiful vistas of the epic scenery. There are 10s of kilometers of almost completely empty hiking trails to explore and landmarks like 7 Stars Around the Moon, and 9 Dragons and 5 Tigers.

Additionally, the minority Zhuang and Yao people who live in the terraces each have a very unique traditional culture. The Red Yao women are in the Guinness Book of World Records for their long hair, which the women only cut once in their lives.

Elephant Trunk Hill has been a landmark and tourist draw since the Tang Dynasty (618-907). The hill is located at the junction of the Taohua and Li Rivers and resembles an enormous elephant drinking from the water. The elephant is the same as the one from the God elephant legend, who was the mount of the emperor of heaven.

20 kilometers southwest of Guilin, along the banks of the Li River, sits Daxu. At over 2000 years old, Daxu Ancient Town is a window into history. Its cobbled bluestone roads, preserved Ming Dynasty (1368-1644) buildings, docks, tombs, and traditional market offer a lot for those who wish to get off the beaten track.

Moon Hill offers one of the best sights of the Yangshuo landscape available. Besides being a natural arch that hikers can walk under the 230 meters high arched hill.  Be warned, the hike is steep, and in the intense subtropical heat that lasts from March to September, it’s not easy for casual travelers- bring plenty of water. Adventurous hikers may be able to find a secret path that leads to the very top of the hill- just like former US president Richard Nixon and his wife did, back in 1972.

Yao Mountain, or Yaoshan, is the highest mountain nearby Guilin city. The view from the top of this peak affords one of the best vistas of the Guilin karst landscape that is available. Visitors not wishing to over-exert themselves can get a chair lift for 100 CNY at the base or drive up. Additionally, bikes (pedal and electric) can be rented for just 4 CNY per hour at the base.

The mountain affords a lot of beautiful scenery and nice views. Gorgeous waterfalls, golden statues, and rhesus monkeys will greet visitors at the summit and along the way up. Two temples, Yao and Bailu at 450 meters and 700 meters total, dating back to the Qin Dynasty (618-907) will also greet visitors to Yao Mountain.

Finally, for thrill-seekers, the way down can be completed via a wheeled toboggan, which will take down the last half of the mountain on a metal track- don’t worry, the speed is limited for tourist use.

Silver Cave, near Yangshuo, is the largest karst cave in China. Legend has it that a defeated army took refuge in Silver Cave during the Qing dynasty (1644-1911). The army eventually left for safer pastures but left their treasure, hence the name of this massive cave.

Presently, tourists can visit over 2 kilometers of the cave, seeing massive draperies, columns, and stalactite/stalagmite formations. Some of the unique rock formations in the cave include the Music stone, the Flying Waterfall, and the Deep Imperial Palace, all named for what they resemble. The area around the cave is also home to frequent festivities and events.

This hidden gem, in Xing’an, is one of the oldest canals in China. Travelers who venture the 70 kilometers from Guilin that it takes to get to Ling Canal will be presently surprised by the ancient (dating from the 214 BC) complexity of this canal system. The intricate system of locks and damns connects two rivers whose water levels vary by as much as 6 meters in some places.

Boat ride operators at the start of the canal offer a ride to nearby Xing’an Town and hikers can walk along the canal and see traditional houses and locals going about their daily life. The walk is especially nice during the tourist low season.

Near the center of Guilin is the picturesque scenic area called Two Rivers and Four Lakes. This is a must-see for visitors to the city of Guilin. The best time to visit Two Rivers and Four Lakes is around dusk- so you can see the sunset and the city lights turn on around the waterways. At the confluence of the Li and the Taohua rivers are the four lakes, each with its own specialty:

1. Big Banyan Tree: The thousand-year-old banyan tree was planted in the Song dynasty, (960-1279), whose foliage is as still lustrous and green as it was a millenium ago.

2. The Sun and Moon Pagodas: These landmarks are the most representative of this area, and can be found in a huge number of pictures. The bronze pagoda represents the sun, while the whiter tower is the moon pagoda. They stand together in celestial duality- or like lovers.