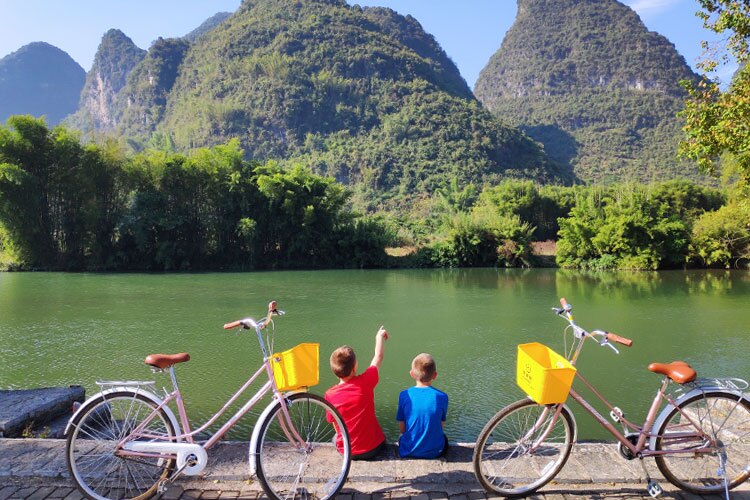 Guilin is suitable for traveling all year round, with unique natural scenery in different periods. During the rainy days, the whole city, including the green mountain, the beautiful rivers, and the fragrant flowers are shrouded in mist, looking enchanting and mysterious.

The best time to visit Guilin is from April to October. When the weather is comfortable, and the unique natural scenery is at its best.

But, the peak tourist seasons, including the Labor Day Festival (May 1st to May 3rd) and National Day Festival (Oct.1st to 7th), should be avoided.

There will be crowds of Chinese travelers at that time. It may cause inconvenience to transportation and accommodation. E.g. ticket booking and hotel reservation. Thus, tourists had better avoid this period.

Spring is getting warm in Guilin compared to the cold weather in North China, with blooming flowers and green trees everywhere. The temperature averages at about 10 ℃(50 ºF).

Sometimes, there is some light rain, which brings some mystery and enchantment to the city. Travelers need to wear long-sleeved T-shirts, light sweaters, and pants.

In Guilin, the rainy season falls in summer. Concentrating mainly in May, June, July, and August, with the annual precipitation of about 1,000 mm, occupying 50% of the total. The temperature can reach 30ºC (86ºF).

Though it is hot and humid, appreciating the scenery of Guilin in the rain and mist, you will feel as if you were in a misty wonderland.

During this season, tourists should wear shorts and short-sleeved T-shirts. Besides, it's necessary to bring raincoats, umbrellas, and sunblock with them during this period.

Due to the cool and comfortable weather, autumn is the peak tourist season of Guilin, with a blue sky and a gentle wind.

Boating on the beautiful river, tourists can see the whole of the beautiful natural scenery. It reflects in the limpid water, such as the green mountains on both sides of the river.

Traveling to Guilin in autumn, long-sleeved coats, T-shirts, and light sweaters are enough.

Winter is chilly and humid in Guilin. It is the coldest period of Guilin all over the year, with an average temperature of about 8 ℃( 46.4 ºF). There is hardly any snow in Guilin.

Winter is the low tourist season of Guilin. Thus, due to the fewer crowds, traveling to Guilin during this period of the year can be convenient and some money can be saved.

Yet, Chinese New Year, also named Spring Festival, usually falls in February every year. When huge crowds are traveling in the whole of China, thus, tourists should avoid this period.

While traveling to Guilin in winter, tourists are better to bring some warm clothes. Such as down jackets, thermal underwear, and cotton-padded clothes.

How to Avoid Peak Traveling Periods?

It is strongly suggested that tourists should avoid peak traveling periods in China.

When lots of Chinese people are traveling, which causes inconvenience to tourists. Such as transportation and accommodation. During peak travel periods, it's very difficult to get a flight or train ticket and hotels raise their prices a lot. Shopping malls are crowded with people.

The peak travel periods include some traditional Chinese festivals. Such as New Year's Day ( January 1st to 3rd), Spring Festival ( late January or early February), May Day( May 1st to 3rd), and National Day holiday( October 1st to 7th).