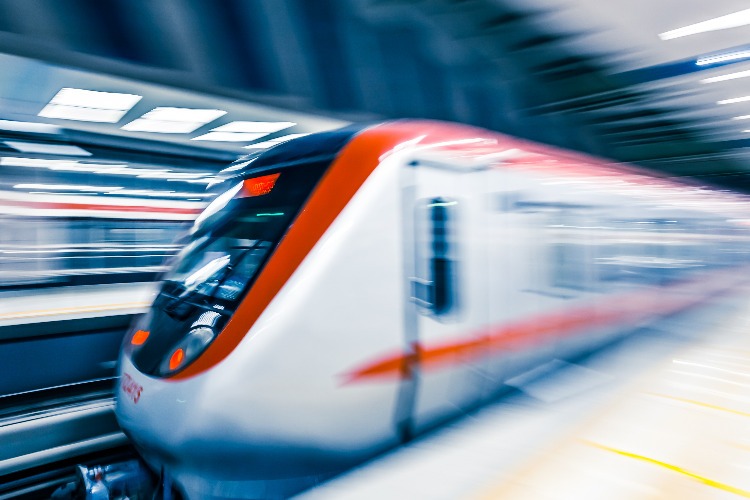 Currently, there are three magnetic levitation lines in service in China: the Shanghai Maglev Line, Changsha Maglev Express Line, and Beijing Subway Line S1. The development of China’s maglev train began in 2016. In 2021, the Chinese newest maglev train debuted in Qingdao, which is known as the world's first high-speed maglev train capable of speeds of up to 620 km/h (385 mph).

What is a maglev train? Maglev train is a train driven by magnetic force. Because of the repulsive force and attractive force of magnets, the train is suspended in the air and does not touch the track when running, so it is also called a floating train or flying train. Without the friction between the train and track, the maximum speed of the maglev train can theoretically reach more than 600 km/h (372 mph).

On July 20, 2021, China revealed a prototype for a new high-speed maglev train that can reach speeds of 620 kilometers (385 miles) per hour. It is considered the fastest train in the world, filling a critical middle space between high-speed trains and planes.

This prototype floating train in China will have a test trial in the vacuum pipeline in the future. Without friction resistance nor air resistance of traditional wheel-rail trains, it is expected to reach a maximum speed of more than 1,000 km/h (620 mph), surpassing the current civil aviation aircraft. According to the speed, the train can make the trip from Beijing to Shanghai in three and a half hours. That cuts about two hours from the travel time needed for a high-speed train to travel the same distance. Moreover, the absence of frictional resistance and air resistance means low noise. The maglev station can be set in the city center for the convenience of transportation.

Developed by the state-owned China Railway Rolling Stock Corporation, this newest maglev train is the fastest mode of transportation within the journey of 1500 kilometers. It uses advanced magnetic levitation technology, which will be a safe and efficient new way of train travel. In addition, it provides advanced and comfortable interior facilities.

Opened in 2002, the Shanghai maglev train is China and even the world’s first high-speed maglev train, connecting Pudong International Airport with the Longyang Road in the eastern side of Shanghai city. This 30 km (19 miles) train journey takes about seven minutes, with a maximum running speed of 430 km/h (267 mph). Since 2020, the maximum speed of the maglev train in Shanghai has been reduced to 300 km/h (186 mph) due to the impact of COVID-19.

The Shanghai maglev train is basically the same as the German TR08 maglev train. Each train has 3 to 5 coaches, which is capable of accommodating more than 900 people.

Shanghai maglev train offers standard seats and VIP seats. There is an LCD screen at the end of the carriage to display the time and up-to-date operating speed. Wi-Fi network service is available on the train for passengers to roam on the Internet during train travel.

Standard seats and VIP seats are available on Shanghai maglev trains. The ticket prices are as below:

* The round-trip ticket is valid for 7 days.

Passengers can buy maglev one-way tickets at a discount of 20% on their same-day air tickets.

Children under 130 cm (4.3 feet) tall can travel by maglev train for free.

Shanghai maglev train tickets can be bought at the ticket office in the station, or from the automatic ticketing machines.

Transfer at Maglev Stations in Shanghai

At Longyang Road Station, you can transfer to Shanghai Metro Line 2 to Nanjing Road at the city center, Hongqiao Airport, and Hongqiao Railway Station; line 16 and line 18 to the other places in the city.

On March 31, 2019, the Changsha Maglev City Terminal, located on the first floor of the Changsha South Railway Station, was put into service, which allows passengers to check-in in advance before going to the airport. Passengers can go through check-in procedures in advance at the Maglev City Terminal, and then take the Maglev Express Line to Changsha Huanghua International Airport without having to take heavy suitcases on the train.

The Maglev City Terminal has four self-service check-in counters and six manual check-in counters. There are LED screens displaying flight status. Check-in at this terminal inside Changsha South Railway Station starts four hours before the flight departure and ends two hours prior to the plane taking off. After check-in, passengers’ luggage will be transported to the airport by transfer vehicle.

Passengers who take Changsha Maglev Express Line can take the shuttle bus free of charge. The shuttle buses operate between the maglev train station and the exit at Changsha South Railway Station, and the maglev airport station to the departure floor at Huanghua International Airport. Shuttle buses depart at any time with accommodation of 5 to 8 persons.