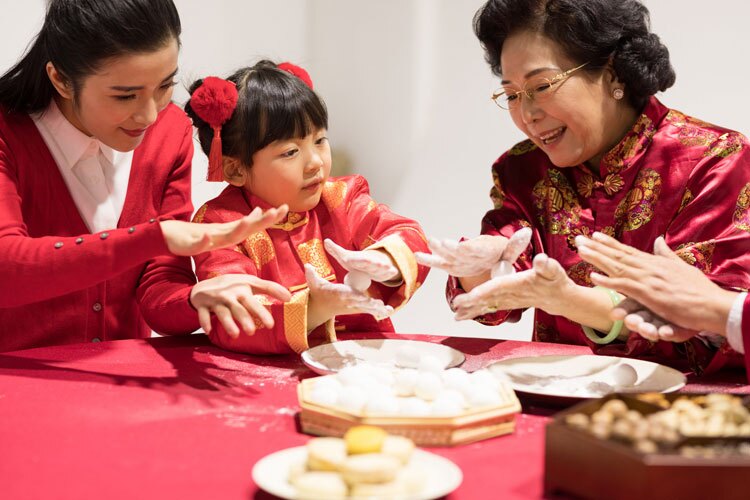 Chinese rice cake or Chinese New Year's cake is a Chinese homonym for "year higher" which cherishes the people's wishes for more prosperity in life and success in career year by year. It is traditionally one of the top desserts during the Chinese New Year.

Made with glutinous rice flour, Chinese rice cake was originally yellow and white, symbolizing gold and silver. But modern-day rice cake has developed into an even more colorful festive food.

Tangyuan is a symbol of family reunion. It is a must-dessert at the Lantern Festival.

Stuffed with white sugar, rose, sesame, bean paste, walnut kernels, and more, rice dumplings are round made of glutinous rice flour served in soup. However, ways of making and naming them are different in the north and south of China.

Peanut Brittle is a very popular sweet snack for the Chinese New Year. It is mainly made of made with shelled peanuts and malt sugar. The snack tastes sweet and crispy. Eating peanut brittle always means a happy, sweet, and prosperous coming year.

Sachima (caramel treats) are sweet (Manchu) pastries popular in Beijing. They are made of fried strips of dough coated with syrup, pressed together, and cut into blocks.

Mahua ( má huā), or fried dough twists are made of two big, thick dough strips, filled with tasty ingredients including osmanthus and other nuts, and fried until golden.

The cake tastes sweet and soft with a special fragrance.

Sesame seed balls are most kids' favorite snack. It is a type of fried food made from glutinous rice flour that is often filled with red bean paste and rolled in white sesame seeds. They are crispy on the outside and soft on the inside.

People first boil yellow rice flour and malt sugar into a batter, then beat and stretch the batter into a pumpkin shape before it cools, and finally roll with sesame and shake to form a sugar melon. With its crispy and sweet taste, sugar melon is children's favorite.

Ginger candy is a handmade snack in the west of Hunan. It perfectly combines ginger juice and maltose.

People believe that eating a piece of ginger candy after a rich meal can help to promote digestion.

Sugar rings in southern China are just as important as fried dough twists in northern China. These flower-shaped fried sweets are made of wheat flour, egg, and sugar, especially popular in Guangxi and Guangdong Provinces.

Walnut cookie is a traditional Chinese new year dessert. It is mainly made of flour and walnut. The cookies look slightly yellow with many cracks in them. It tastes crispy with a walnut fragrance.

For the Chinese, the New Year celebration is incomplete without having sesame candies.  The main ingredients are sesame seeds and caramelized sugar. The candies are sweet and crispy with a pleasant fragrance.

The Chinese like this dessert not only because of its great taste but also of its auspicious symbolic meanings. Sesame is always associated with prosperity in Chinese culture. Eating sesame crunch candy thus is believed to have a good and prosperous new year.