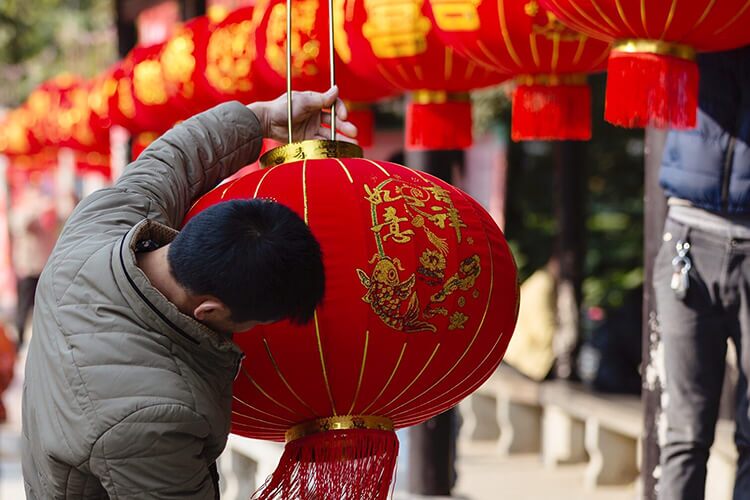 The Lantern Festival, also known as Yuan Xiao Jie or Shang Yuan Festival, falls on the 15th day of the first lunar month, it traditionally marks the end of the Chinese New Year celebration. In 2022, it would be celebrated on 15th February.

Chinese Lantern Festival is the first full moon night of the lunar year; it is also the first traditional festival after the Chinese New Year. People will light up lanterns, guessing lantern riddles, eat yuan xiao and enjoy the time with families or lovers.

Here are the recent Chinese New Year and Lantern Festival dates in the Gregorian calendar.

Origin and History of the Lantern Festival

The Lantern Festival existed as early as 2,000 years ago, during the Han Dynasty (202 BC - 220 AD) when Buddhism has been introduced into China.

Emperor Ming of Han was a big advocate of Buddhism. Hearing of the custom that monks would light lanterns to worship the Buddha on the 15th day of the first lunar month, he officially decreed that all palaces and temples should feature lanterns, and people right across the country should hang lanterns, creating the tradition of lantern displays.

During the Tang Dynasty (618 – 907 AD), this Buddhist festival has grown into a grand folk festival.

Legend of the Lantern Festival

In ancient times, there were once many ferocious beasts trying to harm both people and livestock. Chinese villagers organized to kill these animals and protected the village. The Jade Emperor's beloved crane, however, was lost on earth and was unwittingly killed by a hunter, which infuriated him.

The Jade Emperor decided to revenge on the hunter by burning his village on the final day Chinese New Year celebration. Luckily, the Jade Emperor's kind-hearted daughter wanted to save the innocent villagers' lives, she alerted the villagers to this awful scheme.

Hearing the news, a wise old man suggested the villagers hang lit lanterns in every house and set off fireworks on the 15th day of the first lunar month, to make it seem to the Jade Emperor that the village had caught fire. That way, he would be deceived and might abandon his plan. All villagers did as the old man proposed.

On the 15th day of the first lunar month, the Jade Emperor's troops found the whole town was already ablaze. They returned to heaven to report to the Emperor that the village had been burnt. The Jade Emperor was satisfied, and the retaliatory plan came to the end.

How to Celebrate the Lantern Festival?

Though the Lantern Festival is traditionally the last day of the Chinese New Year celebration period, it is an important day and highlight of the new year.

Lighting lanterns is probably the most widely known tradition for celebrating the Lantern Festival.

When darkness falls, people place candles inside the lanterns and carrying them outside. Every year, lantern carnivals and exhibitions are held in parks and other public places, during which lanterns of various colors, patterns, and styles are on display. The entire area is decorated with beautiful lightings.

Tang yuan (汤圆 tāng yuan), also called as Yuan Xiao (元宵 yuán xiāo), is a must-eat food for the Lantern Festival. Shaped like a round ball, Tang Yuan symbolizes the full moon and people's desires for happiness and family reunions.

Tang Yuan is made of glutinous rice flour and usually stuffed with sesame, peanut, bean paste inside served in soup. However, ways of making them are different in the north and south of China. Read Chinese New Year Food for more details.

3. Enjoying Time with Families and Lovers

Beyond that, the Lantern Festival is also known as Chinese Valentine's Day, a day to celebrate love and affection between lovers.

In ancient China, young ladies were not allowed to go out freely except at the time of the Lantern Festival. It was once customary for single people to carry lit lanterns on the streets in hopes of finding their true love.

With the beautiful full moon and fancy lanterns, the Lantern Festival was romantic enough to be an occasion for young ladies to meet their lovers. Just like the Mid-Autumn Festival!

As time passed, however, the festival no longer had such an emphasis on romance.

Guessing lantern riddles is an incredibly popular activity during the Lantern Festival.

The riddles often contain messages of good fortune, family reunion, abundant harvests, and love. In ancient times, single people can attract the attention of their crush through this guessing game.

Right up until today, Chinese people convene delightful riddle competitions to celebrate the Lantern Festival. Lantern riddles are popular with people of all ages and walks of life as many of them are inspiring and fascinating.

Setting off fireworks used to be an indispensable custom on the Chinese New Year as well as on the Lantern Festival, creating a lovely festive atmosphere.

With the loud noise and brilliant spark, the celebration of the festival is ending.

Besides the above activities, there are also many other ways to celebrate the Lantern Festival, such as performing lion dance or dragon dance.