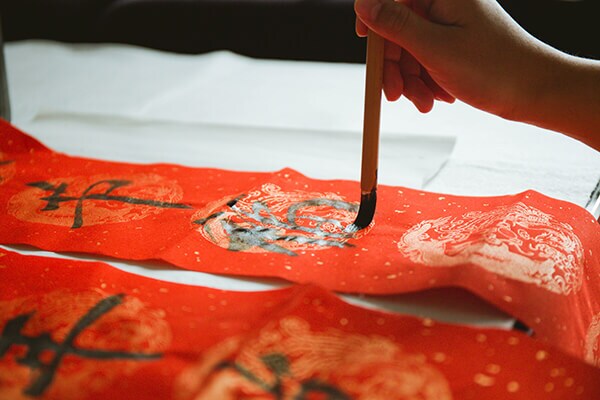 As the most important festival of the year, there are lots of traditions for the Chinese New Year.  Chinese people may celebrate in slightly different ways, but their wishes are almost the same: wishing family members and friends to be healthy and lucky during the year ahead.

To this day, apart from the activities related to worshiping gods, which are played down, the major customs for the Chinese New Year are well preserved and developed.

In the days leading up to Chinese New Year, Chinese families clean their houses: sweeping the floor, washing clothes and other things, cleaning spiders' webs, and dredging ditches. These are very old customs dating back thousands of years.

It is traditionally believed that dust represents "old" things, so cleaning houses means doing away with the "old" and preparing for the "new"; with the intention of sweeping all the rotten luck from the previous year out the door. People do this willingly in the hope of a good year ahead.

If you have a chance to visit local Chinese families during the Spring Festival, you will find their houses have many decorations involved the color red. Even the public places such as streets, parks, restaurants, and shopping malls are all decorated in the color red.

In Chinese culture, the color red symbolizes good fortune and joy. People also believe auspicious house decorations can help to drive away evil spirits and bring good luck. By keeping houses decorated in the color red and filled with auspicious decorations, people hope that the family living inside will be surrounded by good fortune and joy throughout the coming year.

Below are some popular decorations you might encounter when you celebrate the Spring Festival in China.

The Spring Couplets, called 春联 (chūn lián) in Chinese, are hung on gateposts or door panels on lunar New Year's Eve. They mostly describe the bustling atmosphere during the festival and convey people's best wishes for the New Year.

Origin: At the very beginning, the couplets were called "tao fu (桃符 táo fú)". People wrote the names of two gods who can control evil spirits on two pieces of peach wood, which can bring good luck and defeat evil spirits. By the Song dynasty (960-1279 AD), "tao fu" was gradually replaced by two pieces of red paper and evolved into today's couplets at the Spring Festival.

Made from bamboo strips and shaped like tomatoes, red lanterns are the common decorations used during the Spring Festival (including the Lantern Festival).

In Chinese culture, red lanterns symbolize family reunion and good luck. It is said that the higher the lanterns are hung, the luckier the family will be. Every year, lantern carnivals and exhibitions are held in parks and other public places, during which lanterns of various colors, patterns, and styles are on display. The entire area is decorated with beautiful lightings.

Besides cleaning and decorating the house to get rid of the old and make way for the new, Chinese New Year is a time to reunite with family. With a 7-day public holiday, all Chinese people would try their best to go back home no matter how far they live.

Family Reunion Dinner is a grand meal eaten on Chinese New Year's Eve, as well as an important occasion for the whole family. The meal is often particularly rich and substantial, it forms a significant part of gatherings held to celebrate the arrival of Lunar New Year. Lucky dishes at the reunion dinner include fish, chicken, dumplings, nian gao, and more, all with symbolic meanings.

Sitting together and watching the CCTV New Year's Gala has become a popular way to celebrate Chinese New Year's eve since the 1980s.

The gala is also known as the Spring Festival Gala or Chunwan (春晚 chūn wǎn). It is an entertainment show with a combination of modern media and folk customs, which is broadcast live to the world by China Central Television (CCTV) on every Chinese New Year's Eve.

Shousui means staying up late or all night on Chinese New Year's Eve. After the grand reunion dinner, all family members will sit together, chatting, playing cards or mahjong, watch the CCTV gala to welcome the arrival of the New Year.

People believe that staying up late can delay the aging process of the elder family member and prolong their life. The longer children stay awake, the longer their parents will live. You will find many families will keep their light on all night on Chinese New Year's eve.

4. Waiting for the First Bell-Ringing of Chinese New Year

Chinese people like to go to a large square on Chinese New Year's Eve where a huge bell is set to ring. As the Lunar New Year approaching, they count down and celebrate together. People believe that the ringing of the huge bell can drive all bad luck away and bring good fortune.

In recent years, some people have begun going to mountain temples to wait for the first bell ringing. Hanshan Temple in Suzhou is famous for its bell-ringing heralding Chinese New Year.

Setting off fireworks used to be an indispensable custom on the Chinese New Year, creating a lovely festive atmosphere. Chinese people believe that the noise of the fireworks could scare away evil spirits and the sparks could bring good luck.

Chinese New Year red envelopes /red packets /red pockets, known as hong bao in Mandarin or lai see in Cantonese, is the lucky money given from the older generation to the younger generation as New Year's gifts.

The lucky money is usually put in a red envelope or wrapped with red paper. The color red symbolizes vitality, happiness, and good luck in Chinese culture. People believe that giving red envelopes to kids can keep the children safe and bring good luck.

Apart from giving red envelopes to children, the lucky money will also be given to elders. Once an adult starts earning money, he/she will be expected to give red envelopes to their parents as living expenses or just a gift to show respect.

Lion dance and dragon dance is the traditional dance in China, usually performed at Chinese traditional festivals such as Chinese New Year or important occasions such as business opening events.

The lion and dragon symbolize power in Chinese culture. People believe that performing lion dance and dragon dance can scare away evil spirits and bring good fortune. Beyond that, it also livens up the atmosphere of the Spring Festival.

Day-by-Day Guide: What to Do on Each Day of CNY?

Lucky Decorations: How to Decorate for Chinese New Year?

Greetings: How to Say Happy New Year in Chinese?