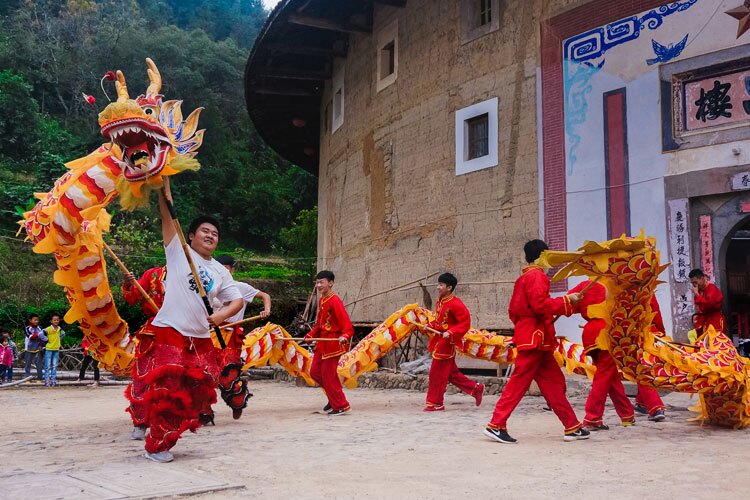 The dragon dance is a form of traditional dance in China. It is normally operated by several dancers in a dragon costume. With the loud music of gongs and drums, a team of dancers carry the dragon on poles and mimic the imagined movements of the dragon.

Like the lion dance, the dragon dance is usually performed at Chinese traditional festivals such as Chinese New Year or important occasions such as business opening events.

Like the phoenix and the unicorn, the dragon is a fictitious image in mythology. However, the Chinese dragon is very different from it in western culture.

The western dragon usually looks like a lizard with sharp teeth and a pair of large wings, representing darkness and evil. Whereas the Chinese dragon looks like a snake with a long body and sharp claws. Chinese people believed that the dragon is the master of winds and rain, it represents power and good luck. It is a symbol of Chinese culture.

In ancient China, agricultural production is dependent on rainfall. In order to pray for good fortune for the coming year, Chinese people would offer sacrifices to the dragon in spring. Over time, dragon worship developed into dragon dance.

Unlike the lion dance is normally operated by two dancers, the dragon dance is usually performed by many people who hold the long sinuous body of the dragon on poles.

The dragon can range in length from as little as 2 meters operated by two people for small displays and up to 100 meters for the larger parade and ceremonial styles. People believed that the longer the dragon is, the more luck it will bring.

The dragon dance costume consists of two parts, the dragon body (including a tail) and the dragon head.

The dragon body is the main part of the whole costume. It is made of bamboo hoops, segment-by-segment, covered with a colorful fabric with dragon scales decorating it. The long body is formed of several sections on poles, all the dancers under the dragon costume cooperate to move the dragon's body by manipulating the poles.

The dragon head is constructed of wood, it can weigh as much as 15 kg.

The dragon was associated with rain in ancient China. In the dry season, people would wear colorful clothes and dance to mimic the movements of dragons. They believed the dragon dance can bring plenty of rain.

A wide variety of dragon dances have developed in various regions in the Tang (618 – 907 AD) and Song (960 – 1279 AD) Dynasties. It is not only worshiping but also entertaining. Dragon dances can be seen during traditional festivals. People believed it can bring good fortune.

Nowadays, dragon dance is an important part of Chinese culture. It is also popular with overseas Chinese around the world.

Dragon Dance in the South of China

The dragon dance is popular in the region of the Yangtze River, particularly in Hubei Province (the province whose capital is Wuhan).

Since the head of the dragon is large and heavy, the performance style is focused on momentum and strength rather than trick movements.

As the dragon is not focused on flexible movements, the dragon's body could be very long. It usually requires more than 9 dancers to operate.

Dragon Dance in the North of China

The dragon dance in the north of China is different from the South, but it is similar to that in Hong Kong.

The head of the dragon is are made of paper or plant fibers, which makes it smaller and lighter. The performance is focused on flexible and fancy movements, so it is more playful to play than the dragon dance in the south.

The costumes of the northern dragon are usually made of fluorescent materials or even decorated with colored lights.