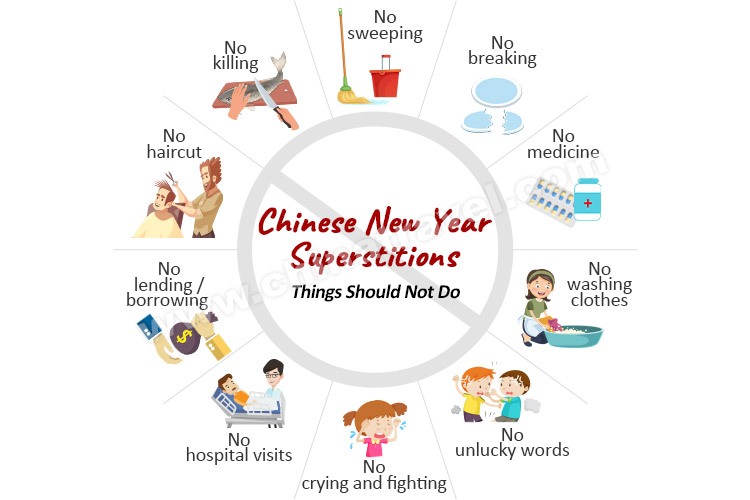 Chinese New Year Superstitions and Taboos - Things You Should Not Do

Chinese New Year is the most important traditional festival in China. Chinese people become very superstitious during the festival. They believe what you do will affect your luck all year, so there are many things you should not do at the festival, otherwise, you will have bad luck in the coming year.

Housekeepers are careful not to clean or throw out rubbish, in case all the wealth that the gods have brought for New Year will be swept away.

2. No washing of clothes.

The first day of the lunar New Year is the birthday of the water god, so don't wash clothes in the first two days or it may wash away the luck and good fortune.

3. No breaking of anything.

It is considered a bad omen if you break anything, especially plates or dishes. It means you are breaking your connection to prosperity and good luck.

But in modern society, it doesn't matter if children accidentally break dishes, as long as their parents immediately say "岁岁平安 suì suì píng ān" (may you have peace, year after year). 岁 (suì) is a homophone of 碎 (suì) in Chinese, which means "broken" or "shattered".

Unlucky words such as "death", "poverty", "running out" and any other words with negative meaning are not allowed to be spoken.

5. No porridge and no meat.

It is believed that only poor people eat porridge in the morning, and therefore doing so will prevent you from getting prosperous in the coming new year. Besides, it is said that the morning is the New Year Festival for all gods who arrive to greet the new year, so try not to eat meat in the morning, in order to show respect for them.

You had better not take any medicine unless you are chronically ill.

7. No crying and fighting.

Everything should be solved peacefully during New Year's time. Try not to cry and not to argue with others to ensure a smooth new year.

Any killing during the festival should be avoided, as blood will bring disaster to the family.

9. No lending or borrowing.

During the festival, nothing should be lent out or borrowed from others, because anyone who does so will be lending or borrowing throughout the year.

Try to avoid the use of knives and scissors during this time, as it may lead to misfortune. Cutting hair is taboo as well until the festival is over.

Just like medicine-taking, don't visit the hospital unless there is a serious emergency, for the reason that it will bring illness for the coming year.

The word "Clock" sounds like the word" death" in Chinese, so it is a big taboo to give a clock as a gift.

13. A married daughter should not visit her parents on New Year's Day.