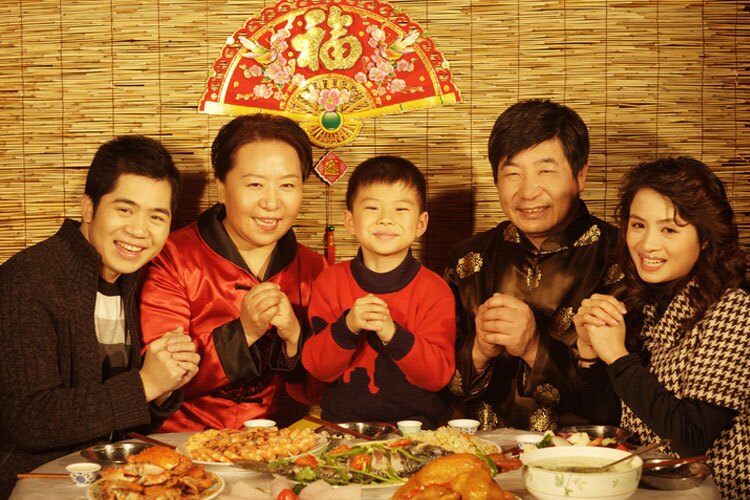 As the start of the Chinese New Year celebration period, Chinese New Year's eve is a very important occasion for Chinese people, it is the reunion day for every Chinese family.

1. Having a big dinner with Family

Chinese New Year's eve is the reunion day for every Chinese family. With a 7-day public holiday, all Chinese people would try their best to go back home no matter how far they live.

All family members will gather together, enjoying a grand family reunion dinner, chatting, singing, and laughing to celebrate this special day.

It is traditionally believed that dust represents "old" things, so cleaning houses means doing away with the "old" and preparing for the "new"; with the intention of sweeping all the rotten luck from the previous year out the door.

Interestingly, one of the taboos of Chinese New Year is avoiding cleaning houses on Chinese New Year Day. People believe that if they do sweep or dust on New Year's Day, their good fortune will be swept away.

Worshiping ancestors is an old custom dating back thousands of years. People believe that the deceased family members have a continued existence in heaven, their spirits will look after the family and have the ability to influence the fortune of the living. So people offer sacrifices to ancestors at traditional festivals and hope the deceased ancestors would bless the whole family.

Sitting together and watching the Spring Festival Gala has become a popular way to celebrate Chinese New Year's eve since the 1980s.

The show includes many different kinds of performances such as singing, dancing, comic dialogue, sketch comedy, magic, and acrobatics.

Ancient Chinese people believed that fire could dispel bad luck, sparks could bring good luck, loud noise could scare away evil spirits and smoke made Yang energy (a kind of positive life-energy) rise. Fireworks produce such effects as fire, sparks, sound, and smoke when they are set off. It naturally combines with people's good wishes and becomes an ideal product for celebrations.

In ancient times, people would set off fireworks at 12:00 PM on Chinese New Year's Eve to celebrate the coming of the new year. Nowadays, many cities across China have imposed bans or restrictions on the use of fireworks for the sake of safety and environmental protection.

The red envelope or red packet is used as a monetary gift from the older generation to the younger generation during festivals or special occasions in China. Through giving red envelopes, parents send their good wishes to the children.

Staying up late or all night on Chinese New Year's Eve. After the grand reunion dinner, all family members will sit together, chatting, playing cards or mahjong, watch the gala to welcome the arrival of the New Year.

People believe that staying up late can delay the aging process of the elder family member and prolong their life. The longer children stay awake, the longer their parents will live. You will find many families will keep their light on all night on Chinese New Year's eve.

The family reunion dinner held on the evening of Chinese New Year's eve is one of the major events of the Spring Festival. In ancient times, it was the biggest meal of the whole year. People could eat a lot of food that they wouldn't normally eat.

Although there are many choices for food in modern times, traditional Chinese New Year's Eve dinner is also a very important meal for every Chinese family. Every dish has a different meaning.

1. Fish: Always Have More Than You Wish For

The Chinese word for "fish (鱼 yú)" has the same pronunciation as the word for "surplus (余yú)". Chinese people always like to have a surplus at the end of the year, people think that saving things helps to make more in the next year. Eating fish stands for "always have more than you wish for".

What's interesting is that people will not finish all the fish as leaving some on the table signifies having everything in abundance for the coming year.

The Chinese word "Chicken (鸡 jī)" sounds like the word "吉jí", which means good luck and auspice in Chinese culture. In southern China, people will serve a whole chicken on the dinner table to show happiness and reunion.

4. Dumplings: Change from the Old and to the New

Dumplings,  in Chinese, sound like the Chinese expressions of changing from the old to the new.

The shape of a Chinese dumpling is similar to a gold ingot, people believe that eating dumplings on Chinese New Year's Eve means "ushering in wealth and prosperity".

What's interesting is that people who eat the dumplings occasionally stuffed with special materials like a coin, a candy, a peanut, or a red date, will have the best luck in the new year.