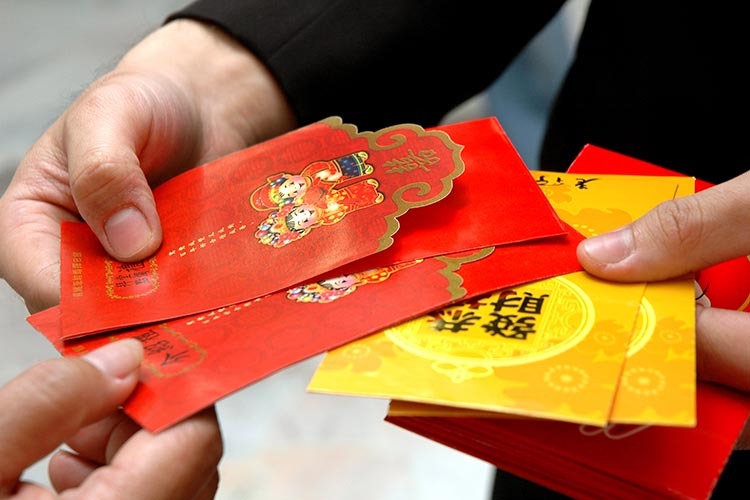 A red envelope (red packet or red pocket), lucky money, hong bao in Mandarin, or lai see in Cantonese, is commonly used as a monetary gift during holidays or special occasions in China, especially during the Chinese New Year.

Why do People Give Red Envelopes?

It is said that there is Sui (祟 suì) in ancient times besides Monster Nian. Sui would come out and pat sleeping children's heads on every Chinese New Year's Eve. The child who was patted by Sui would be scared and have a high fever.

In order to prevent the touch of Sui, people in the past did not dare to sleep on Chinese New Year's Eve, this behavior is called 守祟 shǒu suì (staying up the entire night for Sui).

By chance, people found that putting a coin wrapped in a red packet under the pillow could scare evil spirits away. In order to keep children safe and bring good luck, giving red envelopes to the younger generation on Chinese New Year's Eve becoming a tradition.

The lucky money is called Ya Sui Qian (压岁钱 yā suì qián), which evolved from the homophone "压祟钱" (meaning "money to put pressure on Sui").

What do People Put in A Red Envelope?

Red envelope has had a long history in China.

In addition to the Chinese New Year, Chinese people also give red envelopes as gifts for other special occasions like weddings, birthdays, funerals, house-moving, or beginning school.

Who Will Get Red Envelopes?

Once an adult starts earning money, he/she will be expected to give red packets not only to children but also to parents and grandparents to show respect and a grateful heart.

Nowadays, you can give red envelopes to practically anyone if you like.

How Much Should a Red Envelope Be?

There are no set rules for the amount of lucky money wrapped in the red envelopes. It generally depends on your income. Whole numbers or traditional lucky numbers (such as 6 and 8) are favored.

There is a widespread tradition that luck money should not be given in fours, such as in 40, 400, and 444, as the pronunciation of the word four (四 sì) is the same as the word death (死 sǐ) which definitely should be avoided during the New Year.

1. The envelopes are supposed to be color red as red symbolizes vitality, happiness, and good luck in Chinese culture.

2. With the blessing of hope for a new start, it is best to put new cash instead of a crispy or dirty one in the envelope. Before the Chinese New Year, there are always many people waiting at banks to exchange cash for the new one.

3. You'd better put different denominations in differently designed red envelopes so that you can quickly and tactfully discern whether you're giving away 10 yuan or 100 yuan.

1. Receive red envelopes with both hands.

2. Express thanks and greet the giver with auspicious words when you receive red envelopes. Read New Year Greetings to learn some popular sayings.

3. Do not open the envelope in front of the giver.

An interesting fact is that most children's lucky money basically goes into the hands of their parents in the end. Parents would think "for safekeeping, children should not keep too much money themselves".

Since then, almost all online businesses in China use cyber red packets as a marketing strategy. Spring Festival, a grand occasion for all Chinese, has undoubtedly become a "battleground" for web giants in China, such as Alipay (a major Chinese payment platform established by Alibaba), Tencent (which operates WeChat), and Baidu, making it an annual carnival for people to "grab" digital red envelopes.

The change whereby red envelopes have moved from the real world into digital space has brought new colors to the old tradition of Chinese New Year.

It's amazing that sometimes just a few yuan (Chinese currency) or even a few cents in the digital red packets can help bring people closer to each other. And even in daily life, the Chinese youth love to exchange red envelopes via smartphones, just for fun.

Despite this, the advent of digital red envelopes is just a marriage of ancient customs and modern technology, rather than a complete divorce from the old tradition.