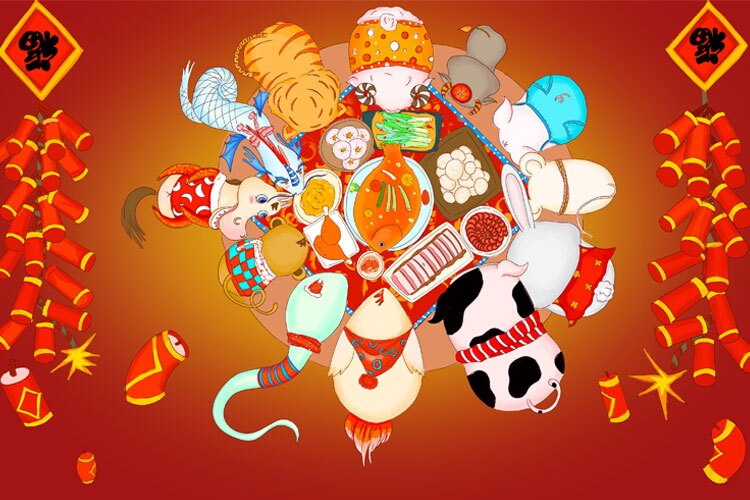 Chinese Zodiac includes 12 animals in this order: Rat, Ox, Tiger, Rabbit, Dragon, Snake, Horse, Goat, Monkey, Rooster, Dog, and Pig. Do you know why the 12 zodiac animals are in that order? Reading this interesting story, you will find the answer, and you may understand each animal's characteristics better.

Background of the Story

Long ago, the Jude Emperor (ruler of heaven) would like to measure time by twelve different animals. He told animals that he would hold a great race on his birthday, the prize was twelve positions on the Chinese zodiac calendar. The one who arrives at the Heaven Gate first will be named for the first zodiac year. The earlier, the better.

What a great prize! All animals want to win the game. However, there is a river ahead of the Heaven Gate……

The First and Second Places: Tricky Rat and Generous Ox

The rat wants to join in the race, but he is a poor swimmer. He came up with a "good idea". On the morning of Jude Emperor's birthday, the rat got up very early. He was the first one to arrive at the river, then he was waiting in the bank.

A few minutes later, the hard-working ox arrived at the riverbank, too. The rat thought that the ox was always strong and generous, he won't refuse my request. Then he came up to the ox and asked him for a favor. As expected, the ox agreed to carry the rat to cross the river.

As they were about to reach the other side of the river, the rat jumped off the ox's back and crossed the finish line first. So, the rat became the first of the zodiac animals, and the ox had been tricked into the second place.

A roar was heard from a tiger, the exhausted tiger came out of the river. Though the tiger is very strong, swimming across the rapids of the river is still a bitter struggle for him. The Jude Emperor was satisfied with his effort and named the third year after the tiger.

The Fourth and Fifth Places: Smart Rabbit and Kind Dragon

Next to arrive is the rabbit. Though she cannot swim, she is quick-witted. The rabbit hopped on some steppingstones and driftwood, so she didn't swim at all! "What a clever rabbit", the Jude Emperor thought, then named the fourth year after her.

Just then, the dragon arrived. The Jude Emperor was surprised why the dragon didn't win first place. Among all players, the dragon was the only one who can fly.

The dragon explained that it took a great deal of time to summon wind and call for rain to help people plant crops. When he was about to fly across the river, he found a helpless rabbit standing on driftwood in the water, so he blew a puff of wind to help the wood float to the riverbank.

Jude Emperor was very pleased that the dragon is warm-hearted and named the fifth year after him.

The Sixth and Seventh Places: Sneaky Snake and Tolerant Horse

With the sound of the horse's hoof, the horse was coming. Just as the Jude Emperor was thinking the horse would be the sixth animal to arrive, a sneaky snake wriggled out from the horse's front foot. The horse was so surprised that he jumped backward giving the snake a chance to take sixth place in the race.

A few minutes later, the goat, the monkey, and the rooster took a bamboo raft and cross the river safely. The Jude Emperor was glad that these three animals could cooperate with each other, then he named the eighth, ninth, and tenth year after them.

Next to arrive is the dog. Although she was supposed to be the best swimmer, she was excessively fond of play and splashed about in the river. The dog lost her time because of her playfulness, so she only got the eleventh place.

When the sun was going down, the pig came and finished the race panting heavily. The Jude Emperor was surprised why the pig arrived so late. It turns out that the pig forgot that there was a race today and overslept!

Finally, the pig was named the twelfth animal of the zodiac cycle.

Listed below are all the 12 zodiac animals with detailed information, check out which animal sign you belong to and get lucky in 2021!