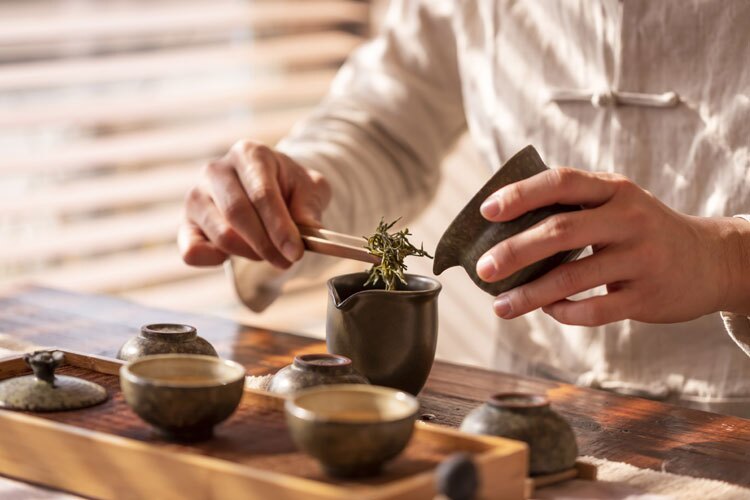 Brewed tea with spring water -Tea as a beverage was first consumed in China and has played a significant role in Asian culture for centuries as a staple beverage, a curative, and a status symbol; that’s the reason why theories of its origin are often religious or royal in nature.

To drink some tea in former China could be considered as a self consideration or an art. It is also a way to better appreciate life.

Chinese Tea is categorized into different types based on the way the leaves are prepared and processed. Whilst the final drink may be very different, it is interesting to note that all of the main varieties of tea actually come from the same species of plant - Camellia Sinensis.

There are 4 main categories; they are white, green, oolong, and black, along with several other less common but distinctively different types including yellow and pu-erh.

Other common types of Chinese tea include jasmine and chrysanthemum flower teas; although according to the strict definition they are actually not tea. Nevertheless, they still make a refreshing and very pleasant beverage!

The varieties of tea also vary according to the season in which they are harvested.
One says there are seven things about which the Chinese people worry about in their everyday culinary life: the wood to warm, the rice, the oil, the salt, the soy sauce, the vinegar, and the tea. Although the tea is lastly placed in the list, it represents nonetheless a cultural heritage mattering in the Chinese tradition.

China is at the origin of the tea and its culture. The tea is “a pillar” in life and it accompanies the Chinese people for more than five thousand years. To offer to the guests a cup of tea is a pleasant tradition and the Chinese for a long time appreciate drinking some tea during or after a meal.

How the Tea Was Discovered

According to one of the Chinese legends, the tea was discovered some 5,000 years ago by Shennong Shi, whose name literally means "Divine Farmer" and who is considered to have been one of the Three Sovereigns (also known as "Three Emperors").

Shen Nong Shi was the first Chinese herbal doctor and is venerated as the Father of Chinese medicine. One of his contributions was tasting herbs so people could have medicine; he discovered the tea while he traveled many high mountains and collected various plants.

Myths tell that Shennong had a transparent body and thus could see the effect of different plants and herbs on him. Thus, he could see which organ was affected and then select an antidote immediately. He found tea named “Cha” to work as an antidote.

One day, Shennong Shi found a kind of plant with green leaves and white flowers. He tested the leaves and noticed a strange thing: they circulated in his stomach and cleaned the food that he consumed before and also perfumed his breath and left a sensation of freshness in his mouth. From then on, Shennong Shi used those leaves to neutralize the toxins of the healing plants he experienced.

He thought that this discovery -dated 2737 B.C-, had been addressed to him by the celestial gods as to show him their gratitude for its act of kindness in its search for healing plants to cure the diseases of the elderly.

In ancient times, tea was used as medicine. People cut the branches of the wild tea plants, took the leaves at the end of branches, and prepared them in boiling water.

The earliest credible record of tea drinking dates to the 3rd century AD in a medical text by Hua T'o who stated that drinking bitter t'u constantly makes one think better.

Under the Qin and Han Dynasties, people developed new methods: they cooked the tea leaves to make “small pancakes " and then compressed them to powdered form. Afterward, they added mixed ginger, spring onion, and oranges.

The tea-drinking became very popular during the Tang Dynasty. Gradually, drinking tea became a pleasant enjoyment. The tea banquets turned out to be very appreciated in the Royal Palace, in temples, and among the intellectuals.

A tea banquet is at the same time a solemn and elegant event, following the strict rules of the tradition. The tea has to be of very high quality, and the water has to result from much-acknowledged sources. The tea utensils must be precious and of outstanding quality.

According to the ritual, during a tea banquet, the person in charge of the ceremony has personally to mix the tea or oversee the blend in the sign of respect to the guests. After this, the mixture ought to be seen by everyone and will be smelt for appreciation of its color before tasting.

After three turns, the dinner guests will judge the quality of the tea, will praise the high virtues of the host, take advantage of the landscape and the conversation or write poems.

Under the Ming Dynasty, the usual process grows to be simpler and thought in a more practical view.

Under the Tang dynasty, Lu Yu (733–804) was valued as the Sage of Tea for his contribution to Chinese tea culture. He is best known for his monumental book The Classic of Tea (Chinese: 茶经) Cha Jing, the first definitive work on cultivating, making, and drinking tea.

Lu Yu's Tea Classic was the earliest treatise on tea in the world. For Lu Yu, tea symbolized the harmony and mysterious unity of the Universe. Lu Yu's statue in Xi'an

The tea culture reflects the oriental traditional culture, combining the tea with Tao wisdom, pronounced in Chinese as Dao, which is an integral part of the Chinese culture.

The Dao of tea stresses the fact of being harmonious, quiet, optimistic, and authentic. Peace of mind is the first step to get to tranquillity as a spiritual purpose in order to combine harmony and serenity. The idea is that as long as a person keeps quiet inside, she can always take advantage of the enjoyment of the conversation, of laughter, of the music, and the opera.

One would say that the tea culture is a kind of intermediate culture that allows passing on the spirit of the Chinese traditional culture to future generations.

Tea is a healthy drink. It has enjoyed a history of thousands of years in China, right back to the ancient Shennong period (some 5,000 years ago), and has played a significant role in Chinese art and society since ancient times.

In the modern era, Chinese tea culture has become a symbol of etiquette in all aspects of people’s lives. Here we discuss several special circumstances in which tea is prepared and consumed.

Tea drinking is a sign of respect in Chinese social life, whether in ancient or modern times. But the connotations are different.

In the past, Chinese people observed strict rules and rituals in serving tea. For example, people of the lower social class had to show their respect to the upper classes by serving them a cup of tea at Spring Festival or at other festival times.

Today, with the increasing liberalization of Chinese society, this rule has been suppressed by the prevailing custom to offer tea when someone comes for a visit, irrespective of class, showing the host’s warm welcome and hospitality to the guest.

It has been customary from ancient times for bride and groom to kneel before their parents and serve them tea, during the traditional Chinese wedding ceremony. This is a devout way of showing gratitude for the love and care received from parents ever since childhood.

Sometimes the bride serves the groom’s family, and the groom serves the bride’s family. This process symbolizes the joining together of the two families.

When Offering Sacrifices to Ancestors and Gods

In China’s colorful folk customs, there is a close relationship between “tea” and funeral sacrifices. The idea that “No tea means no mourning” is deeply rooted in Chinese rituals.

Using tea as a sacrifice, Chinese people worship heaven, earth, god, Buddha and ghosts, and doing so is closely related to funeral customs. Tea is not the exclusive right of nobles, nor was it ever a royal patent; it is a common gift for the whole nation.

The ancient custom of offering tea as a sacrifice to ancestors and gods is well preserved even to this day, whether among the majority Han nationality or the ethnic minorities.

1. The environment for drinking tea should be quiet, clean, and comfortable, giving people the sense of being at ease.

2. The selected tea may vary according to individual. For instance, northerners generally like scented tea, but people from regions south of the Yangtze River love green tea, while Cantonese people prefer oolong tea.

3. Tea sets can either be beautifully crafted or simple and unadorned.