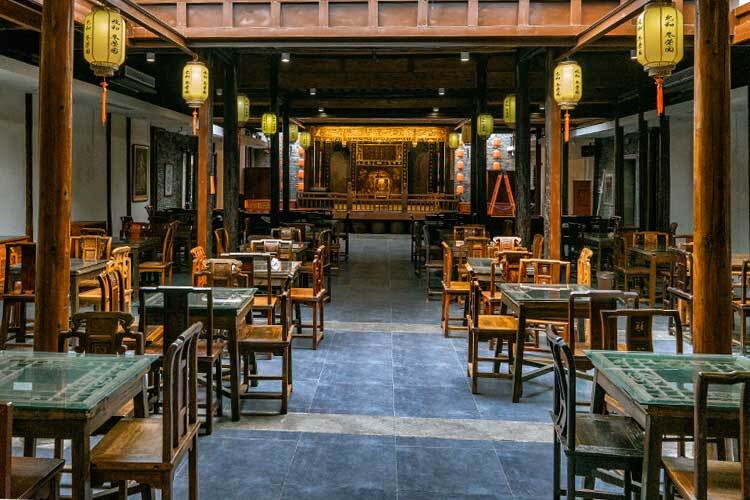 Tea House has been ranked as the public place for drinking tea, relaxing, and entertainment since ancient times, acting as a vivid epitome of Chinese tea culture and Chinese people’s leisure life. Besides providing a place for drinking tea, Chinese teahouses constantly launch new varieties in order to meet the different needs of various people. In winter, tonics with the effectiveness of keeping bodies warm are added to the tea. In summer, something with the effectiveness of driving away summer heat is added to the tea. Besides, in summer, some cold drinks are also sold in teahouses, such as sweet bean paste, cocoribe, stewed plum water, and papaya juice. As for tea sets, there are custom-made tea sets varying from different kinds of tea, revealing the reach and long-standing culture of teahouses in China.

Chinese teahouses prospered in the Song Dynasty, with teahouses all over cities and villages, when teahouses were as many as restaurants. In the Ming and Qing dynasties, the number of teahouses exceeded that of restaurants, becoming more popular and famous. The owners of teahouses in the Song Dynasty preferred to decorate their teahouses with calligraphy and painting of celebrities and various rare and precious plants, in order to attract customers. In the Qing Dynasty, with the acculturation of western culture, the teahouses of China took on a new look. Teahouses could be found in the beautiful suburb, by the pool, and in the vineyard, providing a peaceful and quiet place for drinking tea as well as enjoying the natural scenery in every season. Besides, some magnificent western-style teahouses occurred during that period.

Chinese teahouses enjoy a long-standing history, dating back to the Tang and Song dynasties. Chinese teahouses originated in the Western Jin Dynasty, took shape in the Tang Dynasty, and developed and completed in the Song, Yuan, Ming, and Qing dynasties. It became prosperous in modern times and early years after liberation. In the contemporary era, it becomes glorious. The developing courses of the teahouse reveal the developing condition of the economy, society, and culture in a certain period.

After reform and opening-up, with the rapid development of the economy and improvement of people's living standards, teahouses flourished in China. According to the statistics, there have been more than 25,000 teahouses in China, with employees of over 2,500,000.

Teahouses of Beijing boasts high grade, among which, there are teahouses with a minimum charge of 1,000 Yuan per person; while Shanghai teahouses feature large quantity.

In Qing teahouses of Beijing, pergolas are built outside the gate, where customers can chat and enjoy tea in every season except winter. Qing teahouses are deeply fond of by the old. In addition, in Beijing, there are also Chess Teahouses suitable for playing chess.

Beijing is always a top destination for visitors throughout the world. After climbing the marvelous Great Wall and the magnificent Forbidden City, just throw yourself in a local old teahouse, and you’ll find a totally different world.

People of Sichuan Province have been keeping the habit of drinking tea. Drinking tea in teahouses is the typical tea activity of Sichuan. In Chengdu, teahouses and tearooms of different sizes are spread all over the cities. Some are decorated with calligraphy, painting, flowers, and mediascape, creating a beautiful and quiet environment.

According to statistics, there are more than 700 teahouses in Hangzhou at present. Some boast tea ceremony, such as Tai Chi Teahouse; some feature tea cakes and relaxation, such as Qingteng Teahouse; some boast ecological environment; some integrate aesthetic enjoyment and tea-tasting, such as Ziyige (紫艺阁) Teahouse and Heji (和记) Teahouse.

In addition to West Lake, Hangzhou is also famous for its Longjing Tea, hence being commonly regarded as the best city managing teahouses. Our 2-Day Hangzhou Tour from Shanghai will be a great experience for you to escape from the busy world and enjoy a slow and peaceful tea culture trip.

The teahouses of Tianjin are just like the teahouse of Beijing, containing tea, snacks, singing opera arias (without makeup and acting), and storytelling. However, its cultural atmosphere is not outstanding. In China, the famous cross talk, which is deeply loved by many Chinese people, originated from the teahouses of Tianjin. These years, listening to a cross-talk in a teahouse of Tianjin has become a fashionable and unmissable experience. Audiences burst their sides with laughter at the cross talk. A number of audiences from other areas flock to Tianjin to listen to teahouse cross-talk, spending a day of relaxation in peals of laughter.

Being interested in Tianjin teahouse cross talk? Why not customize your private trip with China Travel?

The teahouses of Guangdong feature magnificent appearance and they are decorated gorgeously, with a rich cultural atmosphere. There are thousands of teahouses in Guangzhou, including professional teahouses and hotel teahouses. Guangdong teahouses are also served as restaurants for having meals. There are over 60 varieties of delicate refreshments. In Guangzhou, people having a date, holding family reunion parties, and having business negotiations are all usually held in teahouses.