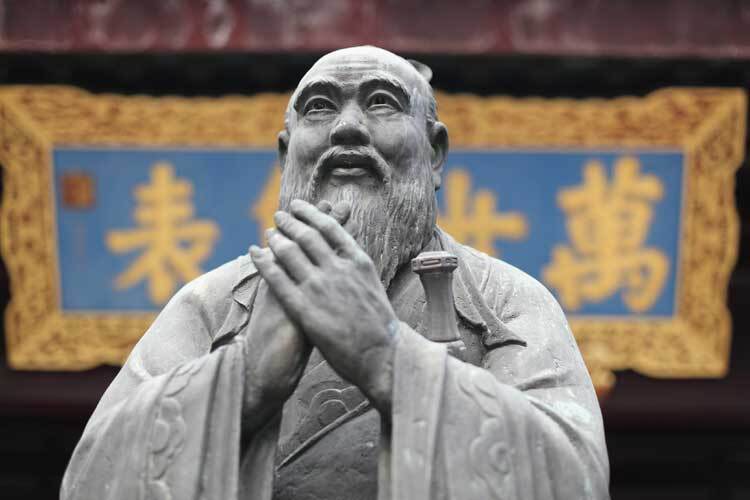 Since Confucius initiated Confucianism, though it has gone through changes of past dynasties, it has been the mainstream of Chinese ideology, politics, and culture all through the ages. "The traditional culture of China has a long history and Confucianism basically occupies a backbone position."

The Three Periods of Confucianism

Confucianism was shaped during three phases:

The Four Tenets of Confucianism

The four tenets of Confucianism are humanity, rite, mediocrity/neutrality, and virtue.

The society that it appeared in is at the key period of a great revolution. Under the social climate of collapsed rites and music, Confucius and Mencius took the enlightenment of King Wen of the Zhou Dynasty and transformed the norm of rites and music into the foundation of the practice of human relations.

Confucius (551 - 479 B.C.) is a great thinker and educator in the period of Spring and Autumn and the Warring States and the founder of the Confucian School. The main literature representative of his thoughts is the Analects. The basic thoughts of Confucius can be embodied in the following six aspects:

Humanity is the core of the political thoughts of Confucius, it put forward the problems of how to conduct oneself and deal with the relationship between people. There should be respect, lenience, honesty, modesty, and mutual favor between people. Moreover, people should be "humane" and "humane people have a loving heart for others".

In order to practice "humanity", people must also place an emphasis on "filial piety", follow the "doctrine of faithfulness and forgiveness" and advocate that "do as you would be done by others" and "be forced to work by no one else but myself". He regards "humanity" as the highest principle, standard, and mode of conducting oneself, the object of which is to optimize human relationships.

"neutrality", namely, "mediocrity" is the standard for practicing "humanity". It requires people to follow "the doctrine of mediocrity". Whatever happens, people should "take hold of their two extremes, determine the Mean, and employed it in his government of the people" (Book of Rites, Mediocrity). "Going too far is as bad as not going far enough". Therefore, people should be within reason when doing all kinds of things and dealing with all kinds of problems. There should be no excessiveness and falling short. This is a throughway of Confucianism and also their social philosophy.

"Virtue" refers to "humanitarian rule" and "virtuous governing" in the strategies of managing state affairs and criticizes that "tyranny is fiercer than a tiger".

Confucius proposes that rulers themselves should "cultivate virtue", "command oneself" and "rule by virtue". If the people be led by virtue, and uniformity sought to be given them by the rules of propriety, they will have a sense of shame, and moreover will become good.

He argues against collecting heavy taxes from people, advocates using the resources of people moderately, proposes thoughts such as "saving penalty", "reducing tax collection", "economizing in the use of resources and loving the people", "employing people when it is timely" and "benevolence saves people", and devises a political route from cultivating one's morality to managing state affairs and conquering the world.

However, the "humanitarian rule" and "virtuous governing" don't mean immense leniency but alternating "leniency" with "fierceness". Those who "go against superiors" must be corrected fiercely. This is the"kingly way" of Confucius and Confucianism.

He not only puts forward the educational thoughts of establishing the private institutions, educating without distinction, and teaching students in accordance with their aptitude, but also spread them. He advocates providing education for people and contends that "people" can be educated so that they might easily accept the administration of "the kingly way".

He contends that people should strengthen the cultivation of individual mind, "self-command", and "the cultivation of one's morality" to enhance the consciousness of implementing humanity and virtue, and cultivate and perfect the ideal interpersonal relationship.

Therefore, it is also called "human science". Since it places an extreme emphasis on rites, it is also called "heart science". Because it attaches extreme importance to politics, it is also called the science of "governing a country and conquering the world". In fact, Confucianism can be divided into the two aspects of "inner sageness" and "outer kingliness": one is cultivation. Everyone can become a sage in virtue through individual cultivation. The other is learning from the world. Everyone should realize individual and national ideals through such effort. The former is basically within the extent of cultivating one's moral and togethering one's family and is internalized as the doctrine of self-cultivation; the latter is basically within the province of governing a country and conquering the world and externalized as the politics of governing the people. Therefore, Confucianism has been classified as the learning of cultivating one's morality, togethering one's family, governing a country, and conquering the world and "the doctrine of inner sageliness and outer kingliness".

The ideology and culture of Confucianism have the effects of maintaining kingship, regulating conflict, and stabilizing society. Therefore, it has been esteemed as a classic of governing a country and a magical weapon of administration by the feudal rulers of all dynasties and become the dominating thought and spiritual backbone of feudal society in China.

Since its birth, Confucianism has a large on the world:

Confucianism has existed in China for several thousand years. It still has tremendous potential influence on all the aspects such as politics and economy in China. Confucian thoughts have been the most basic mainstream value of the common people of the Han nationality and other nationalities in China all through the ages. The basic values of Confucian thoughts of "rite, justice, honesty, shame, humanity, love, loyalty and filial piety" are the basic rules of consciousness for the daily conduct of most  Chinese people all the time. The courteous, friendly, gentle, honest, tolerant, earnest, and industrious temperament of the Chinese nation has also gradually developed under the education of Confucianism.

Confucian thoughts have a wide influence in all the nations of East Asia.
In Korea and Japan, ethics and etiquette have been under the influence of Confucian viewpoints such as humanity, justice, and etiquette, etc. The influence is still quite obvious up to the present. In Korea, there are many people that believe in all kinds of religion. But they give prominence to Confucianism in ethics and morals. After the invasion of western civilization into Korean society, all kinds of social problems have increased to some extent. However, the Korean government takes the ethics and morals of Confucian thoughts as a restrictive power for maintaining social stability and deepens Confucian thoughts in education.

Confucius had three thousand disciples and hence summarized many effective educational methods, such as "Look back to the old, if you would learn the new", "Among any three people walking, I will find something to learn for sure", and "Leaning without thinking you feel lost, thinking without learning you turn to indolent", etc. Confucius was respectfully called "a person of exemplary virtue of all ages" by posterity. Regions such as Taiwan fix the "birthday of the saint Confucius" as "the Teachers’ Festival". "Advocating literature" and placing an emphasis on education is the Confucian thought and also one of the basic values of Chinese people.

Delve into Imperial Philosophy in China

The idea of mediocrity is important in Confucianism. It can easily be found in ancient royal architecture; for instance in the Forbidden City, as the palace is perfectly symmetrical. If you want to learn more about Confucius, there is a Confucius Institute in Chengdu where you can register as a student.

The Awesome Yangtze River and Panda Visit trip give visitors a good chance to go to Beijing, Chengdu, and Chongqing, to walk the way of the great master, and enjoy the magnificent nature of China.