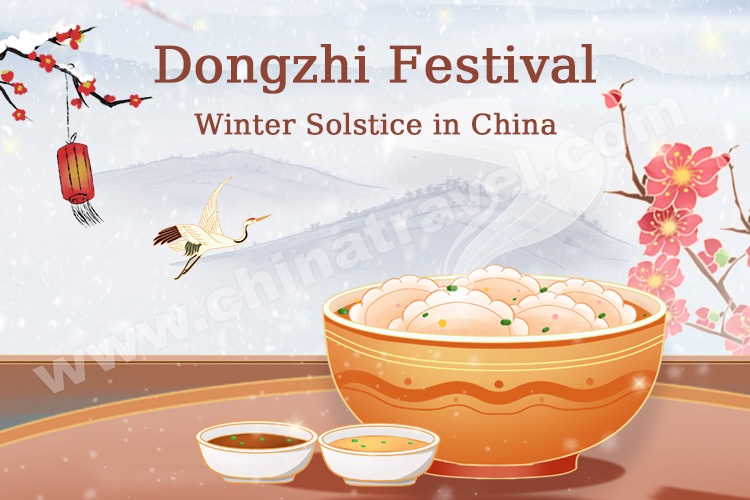 Dongzhi 2022 (Winter Solstice) - When and How Do Chinese Celebrate Dongzhi Festival?

Dongzhi Festival (Winter Solstice) 2022 falls on December 22nd. As an important traditional festival in China, it has a very long history and essential customs. Chinese people worship heaven, the earth, and ancestors on the date. By counting nines and eating traditional winter solstice foods, people wish for a great harvest and good fortune in the coming year.

There is a saying “the Winter Solstice Festival is as important as the Spring Festival!”

What Is Dongzhi Festival?

There are 24 solar terms in the traditional Chinese lunar calendar. As the 22nd term, Dongzhi (冬至 dōng zhì) means winter is coming. It is the shortest day of the year, and the weather will become colder and colder on this day.

Dongzhi originates from to Chinese traditional Yin and Yang concept. Yin energy reaches the highest influence on winter solstice day. After the day, the daytime becomes longer, because Yang's energy or positive things will become stronger. It is a turning point with the start of another solar term.

When Is Winter Solstice?

The Winter Solstice is not on a fixed date but varies slightly on the Gregorian calendar. Usually, it falls on December 21 or December 22 in the Northern Hemisphere.

In 2022, the Dongzhi Festival falls on December 22nd. On the day, the sun reaches its most southerly point. Then the Northern Hemisphere receives the least sunlight during the day. It is the astronomical first day of winter.

Dongzhi Festival began as an end-of-harvest festival at the beginning. The history can be dated back to the Han Dynasty (206 BC-220 AD). During the Winter Solstice, the Chinese emperor and his officers would hold a sacrifice ceremony to express their respect to Heaven. The commoners would worship the gods, and ancestors and pay respect to the elders. It is an optimistic day with a reborn and a new beginning. Chinese believes the bad things and dark have gone and a better new year is coming.

Nowadays, Dongzhi Festival is a time for a family reunion, but it is not a public holiday yet. Chinese people will spend time with family and loved ones on that day. There is always a reunion dinner after the sacrificial ceremony. Traditional food such as dumplings and tangyuan are commonly seen at the banquet. Dongzhi Festival is known as "Chinese Thanksgiving Day".

How Do the Chinese Celebrate the Winter Solstice?

There are 3 main traditions of the Chinese Winter Solstice. They worshipped ancestors and Heaven, counting the Nines of Winter song, and eating traditional winter solstice foods.

At the Dongzhi Festival, every family put the family’s ancestral tablets and photographs on the home altar. They burn incense and Joss papers and prepare food offerings for the ancestors.

In the southern part of China, some people keep the custom of sweeping ancestors' tombs. The Dongzhi Festival, the Spring Festival, the Qingming Festival, and the Double Ninth Festival are the 4 traditional festivals in China to worship ancestors.

At the same time, Chinese people offer sacrifices and food to heaven and the earth to show their respect. The food offerings mainly include meats, teas, and wines. It is believed it will bring a good harvest and harmony the next year.

Counting Nines is the most interesting folk in the Chinese Winter Solstice tradition. In ancient times, Chinese people found this way to count days in winter with the lunar calendar.

The folk is about this:

The coldest day appears around the Winter Solstice. It is important to keep one’s yin and yang balanced during the cold season. There are typical foods for the Chinese to warm the body up and provide protection against cold weather. People use positive yang concepts when they create winter solstice foods.

In the north of China, dumplings (饺子 jiǎo zi) are a must-eat food. People make lamb dumplings with their family members for dinner. They believe they can maintain good health with ear-shaped dumplings. What’s more, the dumplings will protect their ears from being frostbitten.

Eating dumplings tradition can be traced back to the ancient herbalist doctor Zhang Zhongjing (150–219 AD). Zhang found many people were suffering frostbite on cold days. He used fatty lamb, Chinese medicine, and dough to make dumplings. Then he gave away the dumplings for free to cure peoples’ frostbite. From that time, making and eating lamb dumplings at important festivals became a tradition.

In the south of China, people eat dumplings sometimes during the day. But the glutinous rice ball called “tangyuan” is much more common. Tangyuan is a small round ball made of glutinous rice flour with sesame, red bean paste, and sweets. It is made in pink or white color and is often served in a bowl with a sweet soup. Yuan means reunion and perfect in Mandarin Chinese, therefore Tangyuan symbolizes family reunion and prosperity. Mutton soup, rice cake, and red bean sticky rice are also popular in southern China.

There are different food customs in the other parts of China. For example, wonton is very popular in Suzhou; while mutton soup is must-eat festival food in Western and Northern China. Roasted is the favorite food for People in Guangdong Province, and Jiangsu Duck, or Gingerbread Duck is popular in Xiamen.

When Chinese people meet on the day, they often say "Happy Dongzhi Festival" or "Happy Winter Solstice". In Mandarin, this is "dōng zhì kuài lè" (冬至快乐).

How do you wish for a happy winter solstice? Here are the most popular Dongzhi Festival greetings. Choose one of them to send to your friends and family.

2. Wishing you happiness, a family reunion, and a happy Winter Solstice!