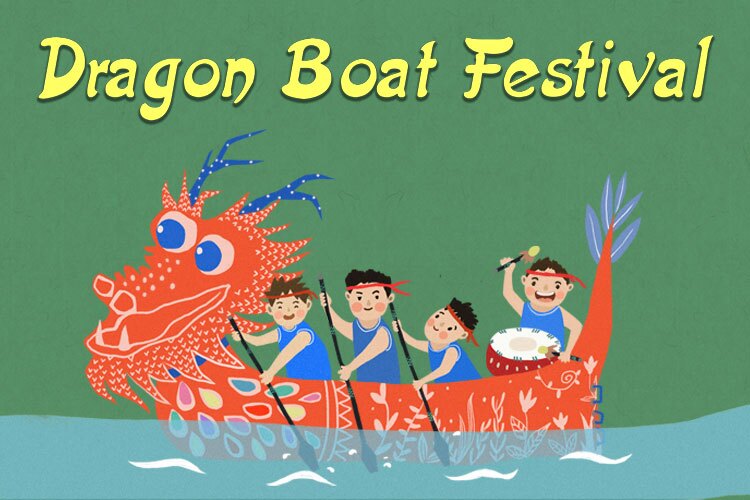 Chinese Dragon Boat Festival - How It is Celebrated

Dragon Boat Festival or Duan Wu Jie, is one of the three most important lunar festivals in China, along with Spring Festival and Mid-Autumn Festival. The festival is celebrated to commemorate Qu Yuan, a famous scholar in ancient China.

The Dragon Boat Festival has a long history of more than 2,000 years. During this long period of time, various traditions have developed.

Dragon boat racing is one of the most important traditions at the Dragon Boat Festival. The activity is widely held in China's southern and southeastern areas where rivers and lakes are densely scattered.

The dragon boat is a human-powered watercraft that is shaped and decorated like a Chinese dragon. There are usually 18 to 20 people in a standard boat for races. During the races, members of the boat paddle harmoniously and hurriedly, accompanied by drum beats produced by the drummer.

The origin of the activity is dated back to 2000 years ago. Legends go when Qu Yuan drowned himself in the river, many fishermen rode their boats trying to find his body. Every year later locals would ride dragon boats commemorating Qu Yuan, hoping to disperse creatures under the river in this way.

Eating zongzi has become an indispensable part of the Dragon Boat Festival celebration. In China, almost every household will eat Zongzi when the festival comes.

Zongzi is a glutinous rice dumpling wrapped in reed leaves, with various fillings. Depending on the location and region of China, the taste of Zongzi is different. Generally speaking, people in southern China prefer the salty one while those in northern China like the sweet one.

There is also a very interesting story for eating Zongzi. It is said that after Qu Yuan drowned himself in the river, fishermen tried hard to find his body but failed. Some locals threw rice rolls, eggs, and meat into the river hoping fish wouldn’t eat the body of Qu Yuan. Since then, Zongzi officially became the festival food and lasted until now.

Hanging calamus on doors at the festival is said to ward off disease. This plant is actually very good to keep insects away because of its strong flavor.

During Dragon Boat Festival, usually, kids would wear sachets (佩香囊) in the countryside areas. It is believed that doing so helps drive out the evil spirit and avoid illness. At the same time, people think that kids with sachets look more adorable.

Inside the sachets are some perfumes or herbal medicines like aromatic odor, angelica root, and the rhizome of chuanxiong. The shapes of sachets vary and they are strung together.

In some cities in southern China, some young people will also use sachets to express their affections for each other.

Zongzi, a sticky rice dumpling wrapped in bamboo or reed leaves, is the most important traditional food for the Dragon Boat Festival. In most parts of China, making and eating Zongzi is a significant part of celebrating the festival.

Salted duck eggs are a popular snack around the Dragon Boat Festival. A salted duck egg is a preserved food made by soaking eggs in brine or packing each egg in wet and salted soil.

Salted duck eggs are delicious and nutrient-rich. It is believed that eating eggs with garlic at the Dragon Boat Festival will promote health.

Dragon Boat Festival can be traced back to 2,000 years ago. There’re many legends about this festival, among which the most famous one is about  Qu Yuan, a notable minister, and patriot poet during the Spring and Autumn Periods.

Qu Yuan was an important minister during the Spring and Autumn Periods in the Chu State, which was located in today’s Hubei Province in Central China. During his life he strongly advocated recommending talents from all social levels, enriching the country, and building up the military forces.

However, his advocates were strongly rejected by members of the aristocracy as it would destroy their benefits. Then Qu Yuan was forced to resign and was banished to a remote area of the country, which was the time when he wrote a lot of famous poems to express his love for the Chu State.

In B.C 278, the capital of Chu State was captured by the Qin Army. Qu Yuan was so grieved that he committed suicide by jumping into the Miluo River after hearing the news on the fifth of the fifth lunar month. Locals were very sad about the death of their respectable poet and state official. Every year on this day people would commemorate him spontaneously.

Read more and watch an interesting video on Top 3 Stories of the Dragon Boat Festival.

As the festival is celebrated to commemorate the death of an ancient Chinese scholar, it is not proper to say "Happy Dragon Boat Festival to others, instead, you might greet each other with the phrase： Wish you peace and health on the Dragon Boat Festival （端午安康：Duānwǔ ānkāng）.

Dragon Boat Festival is a public holiday in Hong Kong. It is a day off for the general population. In Hong Kong, the festival is usually referred to as Tuen Ng. There are usually many activities held during the festival.

If you live in Hong Kong or just stop over there for several days in June, you may go to Victory Harbor to enjoy Hong Kong Dragon Boat Carnival. It is a significant international Dragon Boat Festival. The entrance fee is free.

Every year the Foshan City of the Guangdong Province will hold different kinds of activities to celebrate Dragon Boat Festival in different districts. Of these districts, Shunde holds the grandest one.

Besides traditional dragon dancing and the large competition of dragon boat racing on Lake Guipan, there are more interactive activities to help to celebrate the festival.

Miluo River in Yueyang is a famous river since Qu Yuan committed suicide in it 2,000 years ago. Thus it is also the birthplace of the Dragon Boat Racing Match and eating zongzi during the festival, which serves as a good spot to enjoy Dragon Boat Festival during the period.