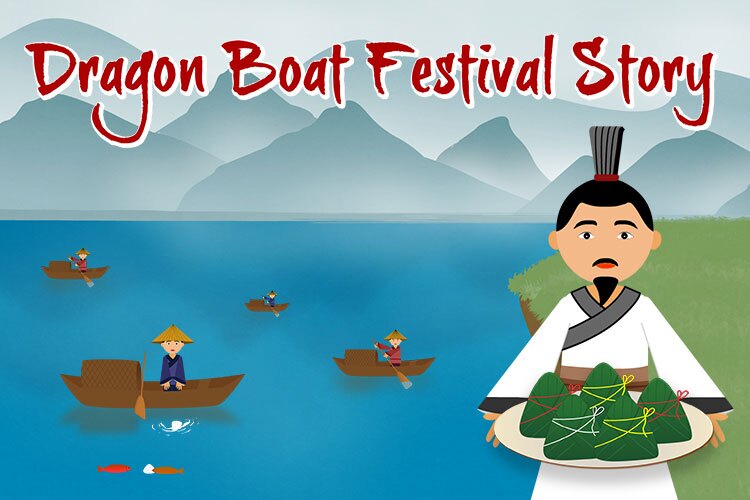 The most well-known story is about Quyuan. It is believed the festival originated in memory of the great poet Qu Yuan in ancient China.

Qu Yuan assisted King Huai to govern the state. He suggested reforms in the state. However, the reform did harm to some nobles' interests and Qu Yuan was exiled to the south of the Yangtze River.

During this time, Qu Yuan wrote a lot of poems expressing deep concerns about his state. Among the greatest are Li Sao, Tian Wen, and Jiu Ge. He also traveled around the countryside to collect legends and rearrange folk odes.

In 278 BC, the state of Chu's capital, Ying, was captured by General Bai Qi of the state of Qin. In despair, Qu Yuan drowned himself in Miluo River, a branch of the Yangtze River.

It is said that local people, who admired him, were very said when they heard of Qu Yuan's death. They took their boats on the river to search his body. This is said to be the origin of dragon boat races. People couldn't find Qu Yuan's body, so they dropped glutinous rices into the river so that the fish would eat them instead of the body. This is the origin of eating Zongzi at the Dragon Boat Festival.

In some regions in China, it is believed that Dragon Boat Festival is related to Wu Zixu (559 - 484 BC), who was a minister of the state of Wu in the late Spring and Autumn Period.

Wu Zixu was the son of Wu She, the tutor of the prince of the state of Chu.  His father and brother were killed by the King of Chu for an alleged crime. Then Wu Zixu was fled to the state of Wu and became a trusted advisor of the king. He was also the builder of Gusu City (today's Suzhou).

In 506 BC, Wu Zixu took revenge for the unjust death of his father and bother. He and Sun Tzu, auther of the Art of War, led army to invade the state of Chu and conquered Chu's capital.

After defeating Chu, a new king Fuchai came to the throne after his father's death, but he didn't trust Wu Zixu. Wu Zixu was aware of the danger of the Yue state and advised Fuchai to conquer that state. Fuchai, however, ignored Wu Zixu and listened to Bopi instead, who had been bribed by the Yue state. Wu Zixu was framed by Bopi for plotting a rebellion and was ordered to commit suicide.

It is said that Wu Zixu's body was thrown into the river on the fifth day of the fifth month. In places such as Suzhou, Wu Zixu was remembered during the Dragon Festival.

Cao E's father, Cao Xu, was a shaman who presided over ceremonies. At the ceremony on the fifth day of the fifth month, Cao Xu fell into the Shun River in Shangyu (today's Shangyu District of Shaoxing City) of Zhejiang Province.

A large scale search was launched but Cao Xu's body was unable to be found for days. Cao E, a young girl who was 13 years old then, was very sad and cried all day. She headed to the river bund to search for her father for a long time yet failed.

Cao E decided to search for her father in the river. She jumped into the river and five days later she appeared above the water with her father in her arms, both dead from drowning.

In memory of Cao E and her filial piety, a temple and a tomb were built in Shangyu.  Nowadays, the Cao E temple has been listed as a protected national and cultural relic.