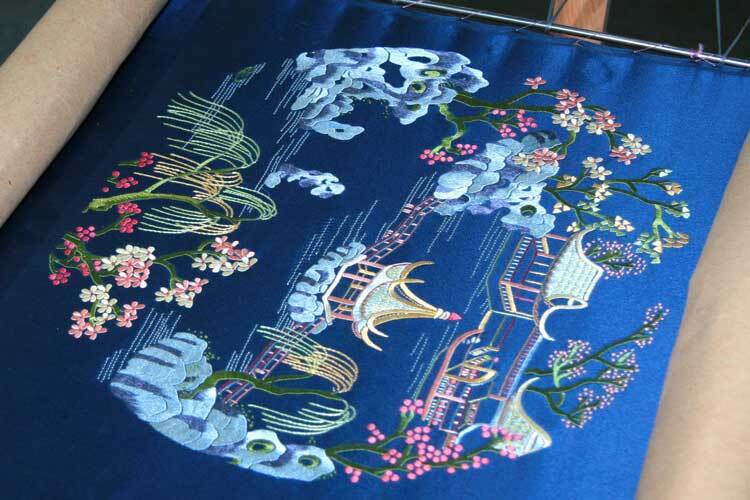 Embroidery is one of some Chinese arts and crafts with a millennia-old history. Many believe embroidery developed subsequent to silk production.

It is impossible to determine whether the technique first originated as a handicraft in the homes of villagers. Or it was started and improved by skilled craftsmen at court or in the luxurious homes of wealthy merchants or officials.

This is impossible to determine and may actually be irrelevant.

What is undeniable is that the Chinese continue to produce matchless embroidered articles. Some of them are expensive high-quality pieces of art for display. Many others are simply beautiful utilitarian cloth objects.

The quality of Chinese embroideries varies significantly. Some are exquisitely hand-embroidered and look like fine paintings. Some are produced by computerized machines that crudely imitate hand embroidery. Sometimes there are even printed backgrounds.

To meet the demand from foreigners, embroidered linen and linen-like tablecloths, napkins, and others are now common in the embroidery shops in China.

There are four major centers of embroidery production in the country. Each has its characteristic stitches, distinctive themes, and unique textures. These are employed by artisans with skilled hands, fine eyesight, and enhanced concentration.

Villagers in these areas not only grow mulberry trees and raise silkworms. They also weave cloth and embroider flowers. Each center has an embroidery institute and museum. Dedicated to preserving traditional craftsmanship. At the same time, they innovate products to meet the needs of contemporary consumers.

Sometimes it is claimed that there are up to 40 different stitches. But in reality, there are four common stitches with many variants.

When creating smooth surfaces, it is best to use satin stitches. Also, note the simulated surface shading.

A couching stitch is essentially invisible. Its purpose is to anchor other stitches. Especially gold silver threads that cannot be sewn directly onto the fabric.

Stem stitching involves looping a thread around another thread to enhance its presence. For example in creating a prominent flower stem.

Intricate seed stitch, which appears in many variants, is known as the Chinese knot. Sometimes the forbidden stitch or blind stitch because it's known to ruin the eyes of young girls. This intricate stitch involves wrapping a needle with silk thread. And then sew it onto the fabric.

Chinese knots rarely appear alone, but in rows or in patterns. So as to leave a fine surface texture of small rings. Since the base fabric for embroidery traditionally varied in weight from satin to gauze. Today synthetic materials are often used as well.

It is not surprising the best-known of the four centers of Chinese embroidery is Suzhou. It's an area renowned for its production of silk.

The specialty there is silk embroidery pictures. It is often referred to as thread painting and embroidery painting. Because many resemble the textured surface one sees in an oil painting.   Some of the pictures actually look like fine photographs because of their shading.

Double-sided embroidery is also well-known art in Suzhou. It is accomplished by skilled artists. They split the fine silk into finer filaments or threads. The thread is then threaded into the needles used for the various stitching patterns.

“Suzhou embroidery is famous for its flat surfaces, neat edges, delicacy, closely packed stitches with even thickness and spacing, and harmonious colors”. All of them are made with meticulous craftsmanship.

The emphasis is on light and dark treatment. Fine hair silk floss in colors ranging from black to white is used. The animal fur is rendered as a realistic three-dimensional texture. This is due to a mixture of stitches and knots.

Guangdong embroidery is judged by many to be showier than either Suzhou or Hunan style.  In addition to black and secondary colors, as well as gold and silver, the primary colors include vibrant reds, yellows, and blues.

It is not surprising that peacocks, butterflies, and flower arrangements are common themes.

Sichuan embroidery flourishes in the western region of the province around Chengdu.

Here, colored silks are used as the base material. This is because many embroidered objects are used as heavy decorative quilt covers and pillowcases.

The most common embroidery subject in stores throughout Sichuan is a group of pandas eating bamboo. And also a school of colorful fish swimming in a pond.

Ethnic minorities, including the Bai, Miao, Zhuang, and Tibetans, are also skilled embroiderers. Each has its own style.

The Tibetans are known for their wall hangings embroidered with sacred Buddhist symbols. Thanka, usually depicts a deity, a mandala, or a scene within a geometric frame. It is usually painted on silk or cotton, but sometimes also embroidered or appliquéd.

Zhuang embroidery balls are often found in stores. It is also often hung on sticks in the hands of itinerant traders in southern China. Stitched on a core of colored silk cloth. These were once presented by young girls to a prospective suitor. Today there are essentially showy ornaments.

The Miao, found in Yunnan, Guizhou, and Hunan provinces, embroider narrative tales on their jackets. They have auspicious motifs on jackets, bags, blankets, and baby carriers.

The technique of knitting with two needles and multiple strands of thread at the same time is used. It is quite bold in color and texture.