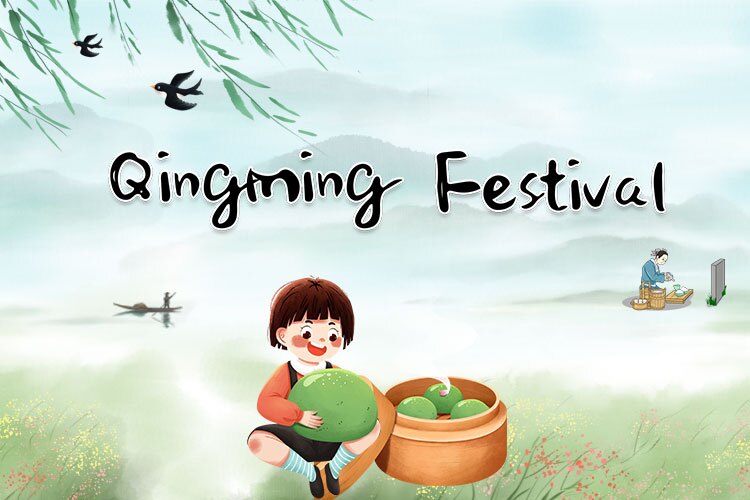 Qingming Festival is also the 5th of the traditional Chinese 24 Solar Terms, meaning “the days are going to be warm and bright (when not raining) and the vegetation turns green.” It is a day for people to go out for tomb sweeping and spring outings.

There are various interesting traditions and activities for Chinese people to celebrate Qingming Festival. The most important ones are tomb-sweeping, spring outing, kite flying, tree planting, and hanging willow branches.

The most important custom for the festival is tomb sweeping. Traditionally, Chinese people bring tea, wine, food, incense, firecrackers, and zhi qian (joss paper made to resemble money and burned as an offering to the dead) when visiting the tombs of their ancestors.

People take foodstuffs as an offering, burn firecrackers and zhi qian, cover the tomb with some new soil, insert several verdant branches on the tomb, and worship their ancestors with kowtows. After this routine people would go back home and eat family dinner together.

Today, it is forbidden to burn incense, firecrackers, and zhi qian in many cities in China, so people present fresh flowers instead, usually chrysanthemums and lilies.

Qingming Festival falls in early April when the weather warms up and everything comes to life. It is such a good time for a spring outing, Taqing (踏青) in Chinese, to enjoy the fresh air and relax.

During Qingming Festival, Chinese people not only fly kites in the daytime but also fly them at night. They attach strings of little lanterns to the end of the kite, which looks like blinking stars. The lanterns are called Magic Lamps.

It is said that if you cut the string after the kite has flown into the sky and let it go freely, it will ward off sickness and bring you good luck!

The sunshine and rain are sufficient during Qingming Festival, which makes for a high survival rate for trees planted at this time. Hence Chinese people would like to plant trees upon Qingming Festival’s arrival.

There are also some places wearing soft willow branches or hanging the branches on gates during Qingming Festival to exorcise evil spirits. Because a Buddhist Goddess Guanyin often shows up to save living beings with a willow branch in a vase of water. People believe that the goddess uses the mysterious water and willow branches to scare away evils.

Another saying of the custom of hanging willow branches on the Qingming Festival is to commemorate Jie Zitui (see the “origin” below).

In South China, people are likely to eat Sweet Green Rice Balls when going on spring outings during Qingming Festival. It is a seasonal snack made from a mixture of glutinous rice flour and green plant juice then stuffed with sweetened bean paste or meat floss and egg yolk.

Originating in the Zhou Dynasty, Qingming Festival has a history of over 2,500 years. It Originated from the Cold Food Festival which remembered Jie Zitui, a nobleman during the Spring and Autumn Period (770-476 BC).

Li Ji was a concubine of Duke Jin Xian. At that time, only the firstborn of the empress could succeed to the throne. However, Li Ji wanted her own son Xiqi to be the next emperor. She plotted to murder the crown prince, Shensheng, making him commit suicide in desperation. Chong Er, the younger brother of Shensheng, had to exile to avoid the disaster.

During his exile, Chong Er suffered a lot. Once Chong Er was so hungry that he fainted. Jie Zitui cut a piece of flesh off his leg. Then he cooked it into the broth and fed Chong Er, which saved Chong Er.

In 636 BC, Chong Er finished his nineteen years of exile and came back to his motherland. He became the ruler, known as Duke Jin Wen, one of the five famous overlords during the Spring and Autumn Period.

The Duke wanted to reward Jie Zitui greatly and offered him a high official in the palace. However, the upright Jie refused and went to Mt. Mian (in Jiexiu County, southwest Shanxi Province) with his old mother to avoid seeing the Duke.

In order to find Jie, the Duke made an order to set a fire on the mountain to force Jie to go down the mountain. The fire burned for 3 days and nights but Jie didn’t show up.

The Duke and his officials went up the mountain and found the dead bodies of Jie and his mother under a burnt tree. In the tree hole behind the back of Jie, they found a piece of cloth with a poem on it written in blood.

The poem said Jie’s real reason to leave and expressed his wish that the Duke become a righteous overlord in the future.

The Duke put the poem away carefully and buried Jie and his mother under the big charred willow tree. For commemorating Jie, Duke Jin Wen changed the name of Mt. Mian to Mt. Jie and built a temple on the mountain.

Later he decreed the day of setting fire to the mountain be remembered as the Cold Food Festival across the country. Every year on this day people should not use fire and only ate cold food.

The next year, the Duke and his fellows came to the tomb. They found the old willow tree had surprisingly come to life.

Looking up to the willow tree, the Duke felt like he saw Jie Zitui. Duke Jin Wen pinched a branch from the willow tree and plaited it into a circle to wear it around his head. After sweeping the tomb, the Duke named the old willow tree “Qingming Willow” and the day “Qingming Festival”. Qingming means “pure and bright”.

Travel to China during the Qingming Festival

April is one of the best months to visit China as the weather gets warmer and some places are at their best for sightseeing. To explore the best of China’s local spring, our travel advisors and experienced tour guides will avoid public crowds and help you create a flexible tour itinerary, tailor-made in your way. Have a look at our sample tour packages and get some inspiration!