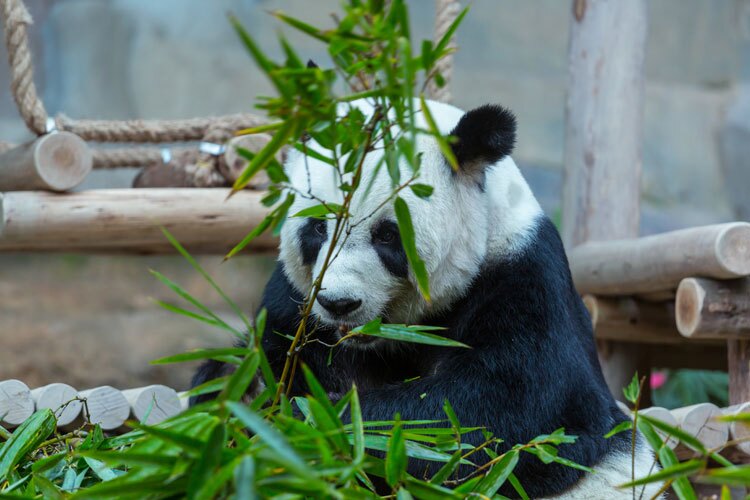 Habitat of Giant Pandas - Where Do Pandas Live

The Giant Pandas mainly live in large bamboo forests on the wet high and big mountains in southwest China’s Sichuan, Gansu, and Shaanxi provinces. The mountains are about 1200 – 3500 meters above sea level and are covered with dense bamboo forest which is the giant panda’s food.

The giant panda’s natural habitat is a narrow corridor covering some mountain ranges including the Min mountains, the Qionglai Mountains, and the Qinling Mountains. There, the pandas enjoy the cool and moist climate they prefer. The areas cover an area of 20,000 square kilometers.

80% of the pandas live in Sichuan province.

The giant panda lives today on the eastern rim of the mountainous Qinghai-Tibet Plateau in Southwestern China, specifically in the areas of the Minshan and Qinling Mountains (the provinces of Gansu-Sichuan and Shaanxi, respectively). There, giant pandas enjoy the cool, moist climate they prefer, since perennially dense (thick as clouds) mists are interrupted only by the occasional torrential rain in summer, while winters are snowy, with the occasional hailstorm.

The remainder lives in the much smaller geographical area of the Qinling Mountains of Shaanxi Province. The mountains channel rainwater into the Yangtze River and Yellow River which are China’s mother rivers. The warm rains support a variety of animals and plants. This area is home to a few hundred pandas and some other endangered species, like the golden monkey.

Giant pandas that live in Qinling Mountains are called Qinling pandas, which is a subspecies of giant pandas of the Giant Panda.

Foping and Changqing Nature Reserves have been established to protect them.

The giant panda once occupied almost all of southwestern to southeastern China as well as parts of neighboring Burma (Myanmar) and Vietnam. But their habitats are dramatically reduced because of over-farming.

Today, the giant panda mainly lives on the eastern rim of the mountainous Qinghai-Tibet Plateau in Southwestern China, specifically in the areas of the Minshan and Qinling Mountains (the provinces of Gansu-Sichuan and Shaanxi, respectively).

Unfortunately, neither of these two mountainous areas forms a single, contiguous panda habitat. Instead, it is broken up into small patches, with human-related patches in between them. A phenomenon referred to by panda experts as "habitat fragmentation".

The Best Climate For Giant Pandas

Giant Pandas prefer cool and wet weather. Wild panda lives in the dense bamboo forest about 2600 -3500 meters above sea level. The mountains are covered with mists all year round, and the temperature is below 20 centigrade.

They like to move in the valleys and mountain slopes where bamboo grows well and they can easily hide from potential enemies. They may climb as high as 13,000 feet to feed on higher slopes in the summer season.

Pandas are multiplying in captivity and are being released into the wild (the giant panda population of the Shaanxi Province/ Qinling Mountains area has increased by more than 10% in the past 20 years, according to WWF figures). More and more patches of human-related habitat are being reclaimed by the panda.

The most recent initiative in this regard is the creation of corridors, also known as Green Corridors, which connect the otherwise isolated patches of panda habitat. The total giant panda habitat of the Shaanxi Province/ Qinling Mountains area, including the Green Corridors, has increased by 80%, according to WWF figures.

The best place to see the giant panda is in Sichuan. There are four panda bases in Sichuan which open to travelers. Read more on the best places to see Giant Pandas and Which one to Choose.