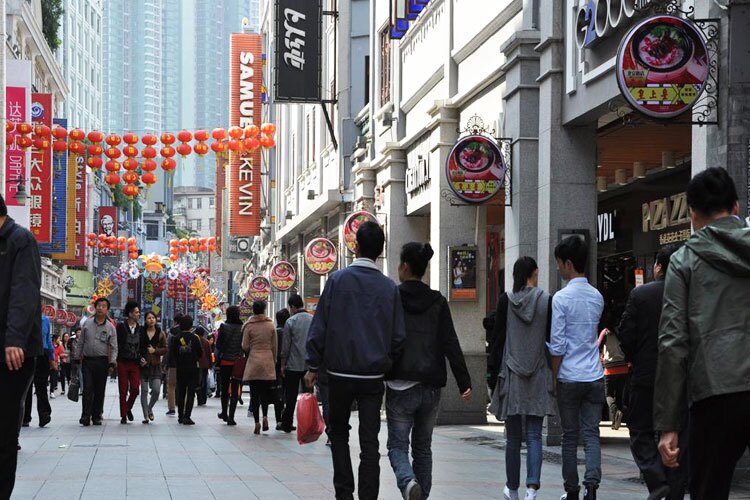 Shangxiajiu Pedestrian Street is one of the most popular commercial centers in Guangzhou. The street is around 800 meters long and has 250 stores on each side of the street. It is the first-ever commercial walking street in the city and was officially opened in 1995.

Although Shangxiajiu Walking Street is as crowded with shops and people as Beijing Road walking street. But it has a stronger historical and traditional feel than the more modern Beijing Road.

Here the stores are located in Qilou colonial-era buildings. A unique blend of 19th century Chinese and European architecture. An arcade formed by the building's prominent second story protects pedestrians from rain showers. Sculptures everywhere on the street showcase the lifestyle of old Canton.

This is an old city street that features a very interesting mix of old Chinese and European architecture.

There are many shopping malls and department stores on Shangxiajiu Pedestrian Street. One of them, Lai Wan Plaza, is very popular and is a great place to shop. The mall has several restaurants and breakfast cafes that offer affordable dim sum.

There are also department stores, fashion accessory stores, clothing stores, and designer stores in Shangxiajiu Walking Street. There are many buildings crowded with a variety of market stalls. Visitors can bargain and find great deals on local clothing and products there.

Dishifu Lu is another attraction on Shangxiajiu Pedestrian Street. It is known for its Ping An Theater that showcases Chinese Opera as well as its many Cantonese restaurants.

Next is Xiajiu Road. Other than the regular range of clothing and snack stores, this street is also home to several smaller department stores as well as jewelry stores catering to women.

Shangxiajiu Square is another attraction that is quite modern. It has many shopping destinations like Saibo Shopping Center, Dongji Mall, and Liwan Plaza.

There are also several interesting detours when you explore Shangxiajiu Pedestrian Street. North of Wengchang Lu and Xiajiu Lu is another street known as Hua Lin Street.

This street was built in the year 1870 and is a jade ornament street. It is home today to some of the most popular jade markets in China. There are more than a thousand shops selling jade at several different price ranges.

Hualin Temple is another attraction on this street. It is a Buddhist temple that was built in the year 527 AD. It is famous for the Five Hundred Arahats Hall that houses 500 Buddha statues in various forms.

While the temple once used to be quite large, it is much smaller today due to the expanding business area.

South of the Shangxiajiu is several markets, alleyways, and avenues like the Qingping Market. The outdoor and indoor area of this market stretches over an area of around 1000 meters. It is a great place to find various good deals.

Visitors will find several interesting items in this market. Such as Chinese products like medicines, dried herbs, scorpions, snakes, artwork, pets, nuts, and seafood among other bizarre items.