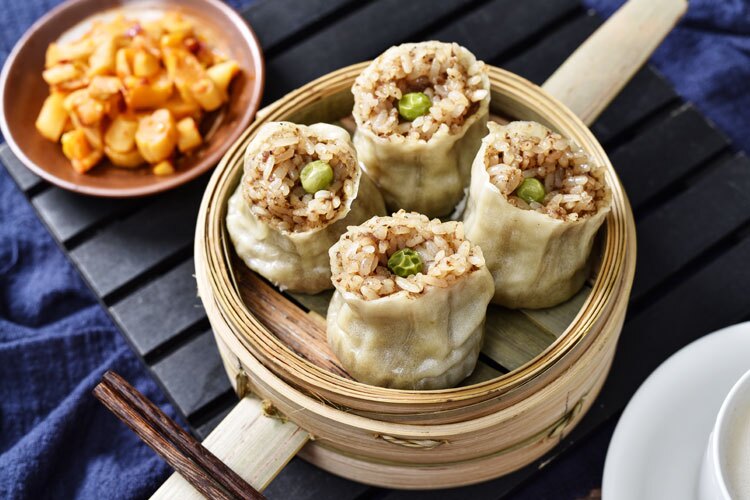 Cantonese food is known for its sweet, mild, and savory flavors. Visitors to Guangzhou, the capital city of Guangdong Province (formerly known as Canton), will find a wide range of food that specializes in savory meats and noodles, and sweet desserts. The main staple of the region is rice, and most dishes will be composed of rice, meat and/or seafood, and vegetables. Less adventurous visitors will be pleased by the lack of spicy food compared to other Chinese regional cuisines.

Yum Cha, or morning tea, is not just food but also a popular Cantonese pastime. Usually, Yum Cha is served with Dim Sum, as part of the tea ceremony. Many different types of tea can be served as Yum Cha, including Oolong, Tieguanyin, and Pu’er.

This mid-morning snack tradition is one of the most popular customs in Canton, and everyone who visits Guangdong’s capital, Guangzhou, should experience it at least once.

Wonton Noodles or Wonton Mien is an age-old dish, dating back to before the Tang Dynasty (618-907 CE), the dynasty which gave the cuisine its name. Despite the name, the dish is usually a warm soup, served with noodles (mien, pronounced: mee-ehn, in Chinese), and wonton dumplings.

In Guangdong, the recipe calls for wonton made primarily of shrimp, and up to 30% minced pork. The noodles are traditionally al dente (a bit under-cooked) and extremely thin, like vermicelli. The broth contains seasoning- of course- and some leafy greens, usually bak choi.

Guangzhou-style sweet and sour pork dates back to the 18th century when a prosperous family used to test their chefs by having them prepare the dish. During the 1800s, Chinese migrant miners and railroad workers brought the cuisine to the US. It became popular in The States after the migrant workers started turning to different professions, notably cooking. The famous American-Chinese dish chop suey refers to sweet and sour pork.

Sweet and sour pork is made by wok-frying pork in a corn flour batter spiced with sugar, vinegar, ketchup, and soy sauce. Garlic and bamboo shoots are also commonly added to this dish for flavor.

Char Siu is a popular style of Cantonese barbecued pork that dates back to ancient times. It seems barbecued meat goes about as far back in human history as fire itself. “Char” means “fork” and “Siu” means “burn/roast.” The dish is prepared from seasoned strips of skewered pork, in a covered oven or over a fire.

Presently, pork shoulder is the preferred cut of meat for Char Siu, but wild boar and all sorts of other meats were used in antiquity. Seasoning is made from a combination of honey, Chinese 5 Spices (ground fennel, Sichuan peppercorns, star anise, cinnamon, and cloves), fermented bean curd, hoisin sauce (black bean sauce mixed with Chinese 5 spice), and soy sauce.

Char Siu is usually served on a bed of white rice, with bac choi or morning glory as a side dish.

A dish with many different faces, White Cut Chicken is a flexible dish that can be served in various widely ranged styles. One version, based out of Sichuan is called “Saliva Chicken,” because of its mouth-watering reputation.

Cantonese style White Cut Chicken is a simple, satisfying cuisine. It is made from a whole poached chicken that is sliced up, with the cuts put back on top of one another. After poaching, the chicken is put in cold water that ginger powder has been dissolved in, this firms up the meat and skin.

The dipping sauce served with the chicken is made from scallions, fresh ginger, and ginger powder, all mixed together in hot cooking oil. Although the dish is simple to prepare, it is not particularly easy, as a balance must be reached between thorough cooking and still maintaining tenderness.

Anyone who has seen a movie with a big Chinese feast has probably seen this famous dish: a whole roast pig, cooked to golden-brown, usually with an apple in its mouth.

Suckling pig takes its name from the fact that it is usually a young piglet, aged 2-6 weeks, which is fed on its mother’s milk. The young pig produces softer, more tender meat than most pork.

In general, suckling pig is eaten for big parties and celebrations. Weddings, holiday feasts, and the celebration of a young child’s first month anniversary are all the sorts of festivities where one might find suckling pig.

Guangdong famously likes sweet foods and desserts. The sweet desserts are a nice break from the savory, oily food that typically represents Chinese cuisine. The following are some especially popular desserts:

Hailing from the Shunde region in Guangdong, this unusually-named dish is a dessert made of milk, egg whites, and sugar. The skins are formed during the cooling of the boiled milk, and the cooling of the cooked custard respectively. It has a high-fat content and its texture and composition resemble panna cotta, the popular European desert.

Also known as “ginger milk curd,” this hot dessert originated in the Shunde district of Guangdong. This dish is made by mixing sugar and ginger into the mix. The milk curdles, giving the dish its pudding-like cuisine.

Egg tarts are probably the most popular dish in the region. Throughout Guangdong, including Guangzhou, Shenzhen, Macau, and Hong Kong, egg tarts can be found in just about every bakery. This almost bite-sized snack is made from egg and sugar in a small pie-like crust. If you visit Guangdong, this is a must-try.

Cantonese rice noodles, also called beef chow fun, or Cantonese beef noodles are a staple meal found in various styles throughout Guangdong. The dish is made from sliced beef, ho fun (wide noodles), bean sprouts, and sometimes greens. Much like sandwiches or pizza varieties in Western countries, chow ho fun can be found prepared in countless different ways according to district, restaurant, or personal preferences.

The wide rice noodle, hoe fun, or Shah fen, is also called Shahe Noodle, as it originated in Guangdong.

Chow ho fun is prepared by first marinating sliced beef, and then heating it in a wok. When cooked, the noodles and other ingredients are mixed with the sauce and beef. The wok hei (wok heat) is important, this dish must be cooked quickly over high fire, and stirred carefully, to ensure the dish is neither too oily nor too dry.

Congee (pronounced kahn-jee) is a type of rice porridge made by cooking rice in water for a prolonged period until it begins to dissolve. It is known as congee only in Hong Kong and in English, in China is often called baizhou (white porridge), and juk in Cantonese.

It’s usually eaten at breakfast time because it is light, mild, and matches well various other ingredients and side dishes. Also known by its slightly less appetizing name, gruel, congee is frequently favored for persons who are ill and infants.

It is either served with separate side dishes like spiced meat, fish, or pickled vegetables, or those ingredients are added to the congee. Other popular added ingredients and sides include duck eggs, salt, bamboo shoots, fermented tofu, various organ meats, crab, trips (intestines/stomach lining), dace (a local river fish), hundred-year eggs, and more. When congee isn’t mild and plain, the flavor is usually savory.

Hot pot is arguably the most popular meal in China. It can be mild, spicy, savory, and much more. It’s also a nice dish that people can sit around and enjoy over a period of several hours.  Just about anything can get cooked in the bubbling broth, and restaurants that focus on hotpot will typically have dozens of spices that can be mixed according to whatever dipping sauce you want.

The pot itself is filled with either a hot and spicy broth, made from Chinese 5 spice, lard/oil, and chili peppers, or a mild broth with dried dates. Sometimes a hotspot will have a divider in the middle, with one side being the spicy broth and the other being mild. Diners cook their own food in boiling soup.

Beef hot pot is one of the more popular versions of hot pot. Diners can choose whatever cut of beef they want from the menu, which will then be delivered to the table, in thinly sliced, easy-to-cook pieces.

Where to Eat in Guangzhou

Below are Guangzhou’s 6 best restaurants: