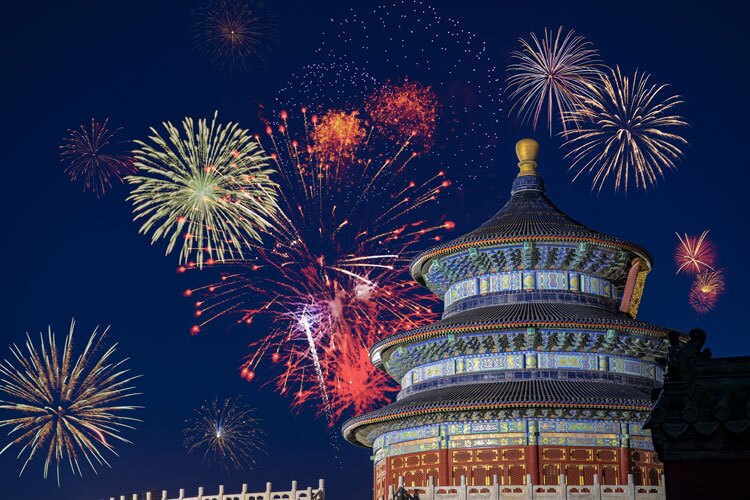 October 1st is China’s National Day, which is celebrated to commemorate the foundation of the People's Republic of China on 1 October 1949. It is a public holiday in China.

China National Holiday is from October 1st to October 7th every year. Chinese people will have 7-day off from work. Companies, government agencies, and schools will be closed for the holiday.

This period is also called "Golden Week" because it is the biggest week for traveling in China. The prices of flights and hotels rise during this public holiday.

How China National Day Is Celebrated?

Many people travel around the countries or abroad.

China National Day holiday is the busiest travel period in China. Chinese people like to travel around their own countries. Tourist attractions are also crowded. Hotels are fully booked.

The most crowded attractions are usually the most famous such as the Great Wall of China, the Forbidden City, the Terracotta Army, the West Lake, etc. If you plan to travel around China during this period, you need to arrange your tours in advance and expect to see the huge crowds at attractions.

The National Day Parade is a military parade event held at Tiananmen Square. The parade is usually held every ten years.

Thousands of soldiers and civilians take part in the massive parades on National Day.

The first part of the parade is to raise the national flag.  The Leader of China then takes a parade car to come into the people’s view. The joint headquarters for the military parade will then make a statement.

The National Day’s parade consists of a military review and march-past which last about 66 minutes. In general, each formation of the march-past goes through Tian’anmen Square in order. There were 14-foot team formations, 30 equipment square matrices, and 12 echelon formations in 2009.

The tanks rolled through the central part of Beijing, and fighter planes flew overhead. Fifty-two new types of weapons which were made in China were revealed in the parade, including the latest nuclear missiles.

In 2009, there was a formation that consisted of foreigners in the China National Day parade. It was the first time that foreigners took part in the parade since the People's Republic of China was founded in 1949. A total of 181 foreigners who come from 53 countries attended the parade. They were overseas students studying in Beijing and foreign experts and representatives from foreign companies.

Foreigners wore Chinese-style dress or their national costumes with a print of "One World" and others dressed in T-shirts with "I love China" on them. They were waving the Chinese national flags in the parade. The international formation showed the development and Chinese prayers for world peace to the rest of the world.

In the past foreigners used to be in the audience only, but now they can participate in this important parade on such a special day. The National Day parade successfully demonstrated the positive image of China which showed the increasing military power of China and the desire to uphold world peace.

There will also be a live celebration of the National Day parade on TV.  A splendid firework display is set off to light the sky brightly and gallantly in the evening. Security is quite tight on National Day, so it is a wise decision to avoid going out in Beijing.