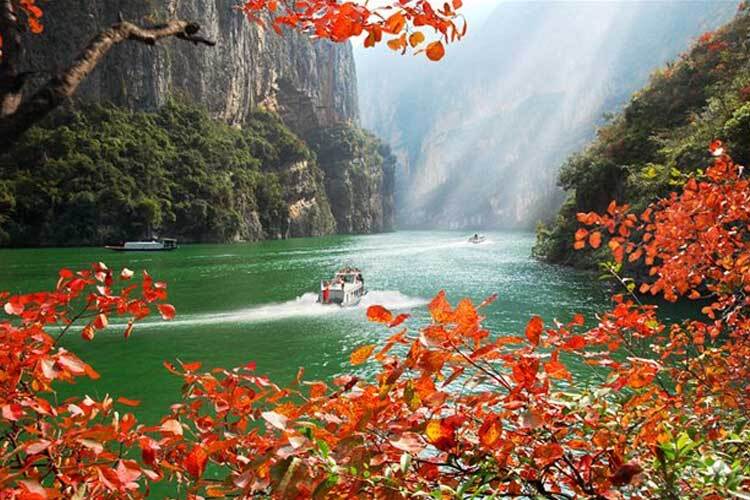 As the third biggest country in the world, China has a vast network of rich rivers and waters. Among them, there are seven major rivers in this country, including the Yangtze River, the Yellow River, the Pearl River, the Huaihe River, the Haihe River, the Songhuajiang River, and the Liaohe River.

The Yangtze River also called the Changjiang River（长江）, is the third-longest river in the world, ranking after the Nile in Africa and the Amazon River in South American. It is 6397 kilometers long, and the longest and biggest river in Asia.

The Yangtze River rises in Tanggula Mountain in Tibetan Plateau and flows through 9 provinces and 2 municipality cities, and the key cities along the Yangtze River include Shanghai, Nanjing, Wuhan, Chongqing, and Chengdu. The Yangtze River together with the Yellow River is known as the “Mother River” in China.

The Yellow River, with a total length of 5464 kilometers ranks the second-longest river in China after the Yangtze River and the fifth-longest river in the World. It originates in the Western Qinghai Province and joins the Bohai River in Shandong Province. The Yellow River passes through 9 provinces, meandering as a Chinese character “几”（jǐ）.

The Yellow River flows through the Loess Plateau which makes the river with high sediment concentration. However, the Yellow Basin was one of the main birthplaces for the Chinese nation. It promotes Chinese civilization in the history of China, so Chinese people call it the “Mother River”

The Pearl River, with a total length of 2400 km, is the third-longest river in Chinese territory. It has tributaries including the East River, the West River, and the North River, and is one of seven major rivers in China.

Night Cruise along the Pearl River is a highlight tour plan on a lot of travelers’ travel lists in Guangzhou. World high-level Hotels on the banks such as White Swan Hotel, Nangfang Mansion, Guangzhou Hotel, and commercial buildings make the Night of the Pear River more outstanding.

Travelers can enjoy the beautiful scenery in the evening along the Pear River, a journey which can be compared with the night in Hong Kong. The essence of Night Cruise along the Pearl River covers the waterway between White Goose Pool and Guangzhou Bridge.

Songhuajiang River is called the “Mother River” in the Northeast of China. The River is originated in Tianchi (The Heavenly Lake) in Changbaishang Mountain. Owned many tributaries, it is known as the “Milky Way” in the Manchu language.

The river is over 1840 kilometers long and its drainage area is about 545,000 square kilometers. There are beautiful attractions along the river such as the famous Songhuajing River Rime.

The best time to witness the beautiful scenery is from Dec.20 to February next year.

The Huaihe River rises in Tobaishan Mountain, flows through Henan, Anhui, and Jiangsu Provinces, and merges into the Yangtze River at Sanjiangying. The river is famous for its difficult management. It is divided into 3 parts, and the total drop is about 200 meters. The Huaihe River and Qinling Mountain form the geographical boundaries of the North and the South in China.

The Great Canal starts in Hangzhou in Zhejiang Province and extends to Tongxian County, Beijing. It links with the Huaihai River in the North and connects with the Qiantang River in the South. With a total length of 1794 kilometers, the canal flows through six Provinces in China.

Now the section between Suzhou and Hangzhou is still in use, which offers beautiful Jiangnan scenery. Thousands of travelers are attracted by the famous Wuzhen Town, where the canal is one of the most important elements.

The Heilongjiang River is an international river running through China and Russia. Known as Amur, it passes the Northeast of China and joins the Okhotsk Sea. The Heilongjiang River gets its name because it meanders as a black dragon. The whole river is 4,370 kilometers long and is the No.11 biggest river around the world. The river not only makes people in Heilongjiang Province benefit but also provides beautiful attractions along the river.

The Brahmaputra River rises in the Himalayas in the Tibet Autonomous Region and is the highest-altitude river in the world. Its entire length is 2840 kilometers and most parts of the river are in China.

The Brahmaputra River in Tibet Language means that the snow comes from a high mountain. It is loved as a “cradle” and “Mother River” by Tibetan people. The Grand Brahmaputra Canyon is one of the largest canyons in the World.

Jinsha River, Lancang River, and Lu River rise in Dajiang of Tibetan Plateau and flow together for over 170 kilometers in Yunnan Province, which forms a magnificent and irreplaceable attraction in China. Travelers can view strange scenery that Water in three rivers doesn’t mix with each other.

Lancang River starts from the Tibetan Plateau, passes through Simao and Xishuangbanna in China. The lower reaches are known as the Mekong River out of China. With a total length of 4880 km, the river runs through Laos, Myanmar, Thailand, Cambodia, and Vietnam, and mingles in the South China Sea. Called “the Oriental Danube”, the Lancang River offers an international waterway tour route in China, Laos, Myanmar, and Thailand.

Nujiang River, one of the big rivers in Southwest China, rises in Tanggula Mountains in Qinghai-Tibet Plateau. The upstream is called “Nagqu River” in Tibetan Language and the section in Myanmar is renamed the Salween River. With a total length of 3240 kilometers, the part flowing through in China is about 2013 km. Travelers can explore regional minorities’ culture and customs in Yunnan such as Lisu people (傈僳族) along the Nujiang River.

The Li River is located in the Eastern Guangxi Zhuang Autonomous Region, belonging to the Pearl River water system. It is famous for its beautiful scenery consisting of water, hills and countryside life.

With a total length of 437 km, the river between Guilin and Yangshuo covers an essential journey of the beautiful Karst landscape in Guilin. Take a cruise or hiking along the Li River are popular activities in Guilin. Travelers from home and abroad love to have a holiday in Guilin because of the wonderful Li River.