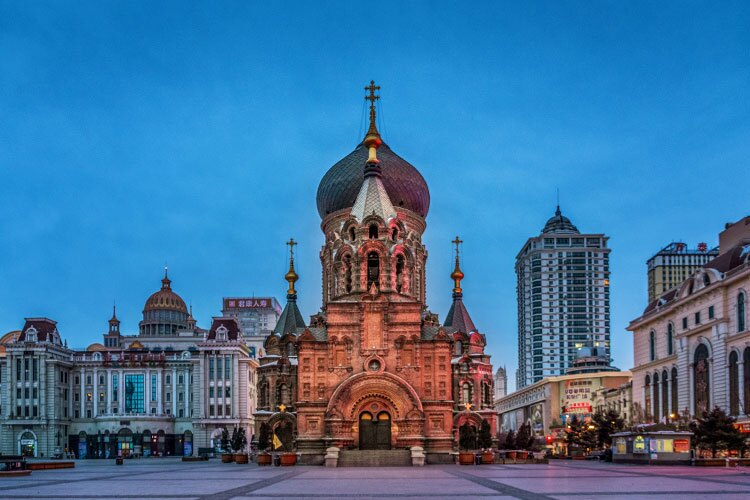 Harbin is the capital of Heilongjiang Province, China's most northerly province. It is called the "City of Ice". Each year the city stages the Harbin International Snow and Ice Festival, which draws enormous crowds coming to see the beautiful snow and ice sculptures. The festival features life-sized castles of ice and snow – a veritable Disney-Park-like exhibition that attracts the most preeminent ice and snow artists from around the world. It is a fairyland of colored ice and colored lights.

Top Things to See in Harbin

The major tourist attractions in Harbin include Ice and Snow World, Central Street, the Russian Orthodox church, the Saint Sophia Cathedral, and the Siberian Tiger Park.

Harbin's ice and snow festival is the big attraction during the winter months, while Central Street, with its multifaceted, international architectural styles and its many diverse shops and bazaars, as well as Saint Sophia Cathedral, the Siberian Tiger Park and the Heilongjiang Provincial Museum, can be enjoyed year-round, though a visit to these is naturally more appealing during the summer months.

The Russian influence was also felt in the city of Harbin in the form of numerous Russian Orthodox churches, the most famous of which is the Saint Sophia Cathedral with its quintessentially Russian onion-shaped turrets (the onion-shaped turret of the typical Russian Orthodox church is a Byzantine inheritance, modified to its more sloping, onion shape in Russia in order to inhibit the accumulation of snow, of which there was no lack during a typical Russian winter, as both Napoleon and Hitler would bitterly come to realize). The imposingly stately Saint Sophia Cathedral remains Harbin's architectural landmark.

During the decade-long Cultural Revolution, Heilongjiang Province absorbed portions of present-day Inner Mongolia, notably the Hulunbuir League, or the part of Inner Mongolia that lies immediately below T-rex's/ the swan's neck (or what would be called a panhandle in the US, the most famous of which is the Texas Panhandle, though the Oklahoma Panhandle, which lies immediately above the Texas Panhandle, has a much more panhandle-like shape). As with many other impermanent changes during the Cultural Revolution, this change was later reversed.

After the opening of China in the post-Mao era, the city of Harbin again came under significant Russian influence. Indeed, Russia is today Heilongjiang Province's main trade partner, accounting for some 53 % of the province's foreign trade.