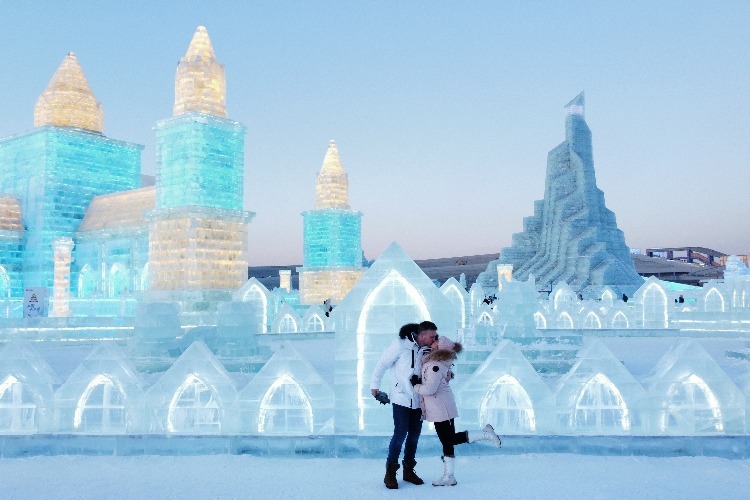 Harbin Ice and Snow World located in Songbei District of Harbin City and on the north bank of Songhua River opens on December 25 or 26 every year.

As the main venue of Harbin International Ice and Snow Festival, Harbin Ice and Snow World was established on the bank of the beautiful Songhua River at the end of 1999. now recognized as the hottest winter spot in China.

What to See in Harbin Ice and Snow World

As the vanguard of the art of ice and snow in Harbin and the world, Harbin Ice and Snow World is attracting countless tourists from home and abroad and will surprise China and the whole world with its perfect combination of art and advanced technology.

When was Ice and Snow World Built

The west zone of Sun Island covers an area of 2.82 million square meters, including the Ice and Snow World. The tourist resort is being built on the base of the year-round scenery of Harbin Ice and Snow World. And there will be an international-standard golf course, water park sports recreational facilities, and European-style landscape in the resort.

Equipped with children’s favorite amusement programs, Features of Eastern Scenic Area meets children’s demand for ice and snow activities. Inside the large inflated buildings, there are services such as shopping, dining, and skiing equipment rental that are provided to visitors. There are also lounges and dressing rooms for visitors.

This area offers sights of educational significance. The magnificent models of Mount Everest and Mount Yan Genghua are based on the glorious deed of Yan Genghua’s climbing up Mount Everest, inspiring people to try their best to overcome difficulties. The large square is used to hold many activities, such as opening ceremonies, artistic performances, super aqueous Disco, and masquerades.

Visitors can enjoy the artistic ice and snow buildings of various styles, take part in exciting ice and snow amusement activities, and have a taste of the authentic cuisines in North China and Russian cuisines.