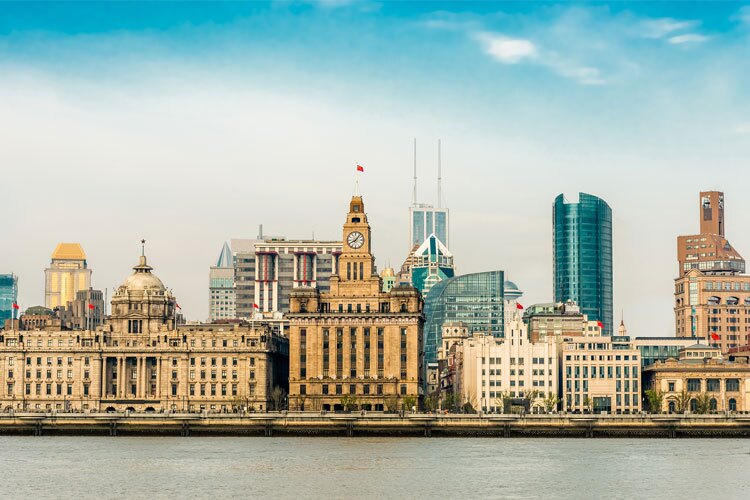 The Bund, a 1.5-km embankment running along the western bank of Huangpu River, is the very landmark of Shanghai. It is an “architecture gallery” with 52 well-preserved old European-style buildings and now has taken on new vitality, chic restaurants, top-end shops, and bars.

Quick Facts of the Bund

History of the Bund

The Bund was once a part of the so-called International Settlement area of Shanghai controlled by foreign forces during a period that stretched from the final chapters of China's last imperial dynasty, the Qing (CE 1644-1911) Dynasty, through to the middle of WWII, when the Japanese, who had occupied much of this part of China at the time, forced the other foreign forces out.

Shanghai International Settlement represented a consolidation of the American and British settlements in Shanghai, which were set up to ensure that the trade and territorial concessions that were forced upon China by the international community were respected (the first such concession being the Treaty of Nanking (1842) between China and Britain, though it was followed by similar treaties with other foreign powers such as the U.S., France, Russia, Portugal, and Japan).

The Chinese saw these treaties as being grossly unfair, which is why they are referred to in Chinese parlance collectively as the Unequal Treaties. The territorial concessions were mainly to be interpreted as access to Chinese ports - both for the purpose of trade as well as for the purpose of replenishment of fuel, food, etc., for visiting ships - but of course, the Shanghai settlements themselves represented territorial concessions.

It must in fairness be said that the Chinese government of the period, though rightly outraged over being compelled to condone trade in opium, also denied all foreign ships, merchant or military, access to Chinese ports, even for the purpose of replenishment, and it was this which was at the heart of the conflict, since the denial of a ship's international right to replenishment effectively banned shipping not only to Chinese ports but also to ports beyond, such as to Japanese ports and to Russia's Pacific coast ports.

The French government was invited to include its settlement in the combined Shanghai International Settlement, but the French declined, maintaining a separate French Settlement (for Francophiles, this has turned out to be a positive development, since the part of Shanghai that corresponds to the French Settlement has retained a distinctly "French" feel, even where the original French architecture has had to give way to newer sidewalk cafés and bistros).

Architectures Along the Bund

The architecture along the Bund comprises such a wide array of Western styles, as well as Chinese styles, that it is renowned the world over as a "World Architecture Expo". The 52 buildings that officially make up the Bund span Art Deco, Baroque, Beaux-Arts, Gothic, Neo-Classical, Renaissance, and Romanesque styles. Shanghai boasts the largest and richest collection of Art Deco structures in the world.

Some of the more prominent buildings that belonged to the Bund's foreign-occupation era have names which, not surprisingly, conjure up colonial times. These are:

How was Today’s Bund Formed?

Many of these grandiose structures of a bygone era were modified or allowed to fall into disrepair after the emergence of the PRC, but after China's opening to the West, thanks to the efforts of U.S. President Richard Nixon and his famous Foreign Minister (Secretary of State), Henry Kissinger, the government of the PRC took steps to have the grandiose buildings of the Bund restored to their heyday glory.

Although the buildings themselves have been restored, most, of course, serve a different purpose today than they originally did, since many, if not most, of the original enterprises, no longer exist (the city of Shanghai and the British bank, HSBC, which of course still exists, could not agree on a price when the restoration of the old HSBC Building was completed in the early 1990s). For example, many of the insurance buildings and shipping houses, etc. now serve as hotels.

As well, due to severe flooding in the 1970s and 1980s, it was decided to build a new level, or embankment, to contain the Huangpu River, such that today the riverfront has been dramatically altered compared to the past. Moreover, to accommodate increasing traffic, much of the parking area alongside the Bund has had to give way to a widened thoroughfare, while most of the wharves that belonged to the riverfront have also long since disappeared, although a few remain, offering pleasure cruises for nostalgia-hungering tourists.

The change in the Bund's riverfront is not necessarily for the worse, however, as the top of the new embankment is in the form of a promenade with special viewing balconies that project outward in the direction of the river, in the style of a bay window, and offer an excellent view of the Huangpu River below as well as a view of the immediate continuation of the city of Shanghai on the river's opposite bank.

The promenade is paved with 140,000 colored bricks and granite blocks and with 32 semi-circular (bay window style) viewing balconies that face the Huangpu River. The promenade, which, in addition to the viewing balconies, also has 21 bowl-shaped flower terraces, 6 pavilions, and a number of stone benches in a variety of shapes, is tastefully lit at night, providing a safe and romantic stroll along the riverfront.

The Bund has become Shanghai's most popular tourist attraction. Due to the historical nature of the architecture along the Bund, there are limitations on the architecture of the surrounding area, so as not to mar the view - or clash with the architectural beauty - of these grandiose old buildings that have finally been restored to their former glory.

What to See Along the Bund

The Bund is a beautiful place to see both old and modern Shanghai, as you look at the older architecture on the west side as well as spectacular views of high-rise buildings on the east side. Walking along the Bund, you can also see some interesting sculptures, as well as the locals who do exercise in the morning. It is also worth having a stroll in Huangpu Park, at the northern end of the Bund. Its green lawn and plants make it the only green area in the busy place. It is a beautiful park to relax and take photos.

How to Get to the Bund by Metro?

Take Metro Line 2 or Line 10 and get off at East of Nanjing Road Station (Nanjing Dong Lu 南京东路站).

Having a Huangpu River cruise is another good idea when visiting the Bund, especially if you want to save energy. The cruise will give you an impressive view of Shanghai, both by day and by night. The cruises have different sizes, capacities, and facilities. Different tour lengths are available, from a half-hour cruise to a 3.5-hour cruise.