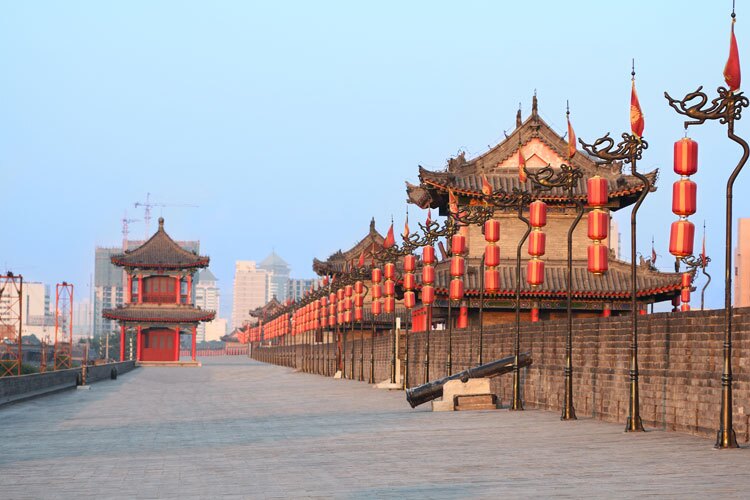 Xi’an City Wall is China’s best-preserved, and largest existing ancient city wall. Originally serving as a military defensive system in ancient times, the city wall today is considered a landmark dividing the city of Xi’an into the inner part and the outer part. The South Gate and North Gate are the two main entrances to the inner city. The city itself is neatly arranged along the wall.

When was the Xi’an City Wall built?

The existing Xi’an City Wall was built in 1370 (completed in 1378), under the regime of the Ming dynasty’s Emperor Zhu Yuanzhang. When Zhu Yuanzhang captured Huizhou, long before the establishment of the Ming Dynasty, he was admonished by a hermit named Zhu Sheng, who told him to “build high walls, store abundant provisions and take your time in proclaiming yourself, emperor.”

Zhu Yuanzhang heeded this advice. Once the whole country was unified and Zhu became the Emperor, he sent orders to build city walls on a large scale. Zhu assured that “out of all the mountains and rivers in the world, the area of Central Xi’an is the most strongly fortified and strategically impregnable. Originally, the city wall was a Tang Dynasty (618-907) structure, built during the emperor’s wall-building Campaign. The current city wall is an enhancement of the Tang city wall.

The Structure of Xi’an City Wall

The Wall is extremely strong and firm and consists of a series of military fortifications including gates, watchtowers, ramparts, battlements, tunnels, and a wide and deep moat running around the city. Over the moat, there used to be a huge drawbridge, which was the only way to cut off the way in and out of the city at war, once lifted.

The gates of the city wall were the only way to go into and out of town. Therefore, these gates were important strategic points, which the feudal rulers racked their brains to try to defend them.

There are 18 gates along Xi’an City Wall, the north, south, east, and west gates. Each consists of three towers: the gate tower, which holds the drawbridge, the narrow tower, and the main tower. The gate tower stands in front of the wall, which is used to lift and lower the drawbridge. The narrow tower is in the middle, whose inner walls have square windows to shoot arrows from. The main tower is the innermost one and forms the entrance to the city.

Barbicans, Wengcheng in Chinese, are by the 4 main gates, connecting the narrow tower and the main tower, in which soldiers could be stationed.< From the barbicans there are also horse passages leading to the top of the wall. There are gradually ascending steps, made so that it was easy for war horses to ascend and descend. There are altogether 11 horse passages around the city wall.

A watchtower is located on each of the four corners of the wall. The one at the southwestern corner is round, probably modeled after the Tang Dynasty imperial city wall. , but the other three are square-shaped. On top of the watchtowers, there is a corner rampart, higher and larger than the ordinary ramparts, used as guard posts or observation posts. This shows the strategic importance of the corners of the city wall in war times.

There is a rampart every 120 meters (394 feet). The ramparts are towers that extend out from the main wall. The ramparts were built to allow soldiers to see enemies trying to climb the wall. The distance between the ramparts is within the range of arrows fired from either side. This allowed soldiers to protect the entire wall without exposing themselves to the enemy. There are altogether 98 ramparts; each has a sentry building on top of it.

Along the outer crest of the city wall, there are crenellations or battlements. Under each of the 5,984 crenels, there is a square hole, from which arrows were shot and watch was kept. The lower, inner walls are called parapets. They were used to cover soldiers when they were traveling back and forth on the wall to view and shoot enemies.

Being the most ancient one, the South Gate was originally built in 582 AD and called Anshang Gate. It was called South Gate when the new imperial city was built and renamed Yongning (Permanent Peace) Gate in Ming Dynasty. Today it is noted for its closeness to its original condition compared to all the other old city gates. Everyday cars, pedestrians, and bicycles go through the gate.

Before the Zhuque (Red Sparrow) Gate, the main entrance of the Tang Forbidden City is the famous Zhuque Avenue- the Avenue des Champs Elysees of the ancient Xi’an- where the emperors of Sui and Tang often held various parades and ceremonies thousands of years ago.

The remains of the Gate were rediscovered in 1985 when the city wall of the Ming Dynasty was opened. As described in the ancient literary works, the gate was truly imposing, built by huge blocks of marbles, and engraved with plenty of imaginative and pretty patterns. The new gate we see today was actually built in 1986 precisely according to its original look.

The Hanguang Gate is in the west wing of the southern face of the imperial city. When the new city was built at the end of the Tang Dynasty (618-907), the middle and west entries were closed down and only the east entry was left untouched. When the North Song Dynasty (960-1127) came a couple of centuries later, the last entry was also blocked out. In 1984 the ancient city wall was restored, and the Hanguang Gate relics were rediscovered. Its doors, pillars, and foundation were made of granitic rocks.

The West Gate, originally the central gate in the west wing of the Tang Forbidden City, was preserved after the construction of the new Forbidden City at the end of Tang. It was moved southward and renamed Anding (Safe and Stable) Gate when the city wall was expanded in Ming Dynasty.

The Wenchang (Prosperity of Learning) Gate, in the south of the Forest of Stone Tablets Museum, was rebuilt in 1986. On the top of the wall, there stands the Pavilion of Kuixing (Star of Wisdom ), which is the only non-military establishment of the ancient city wall

Kuixing is the primary star in the Big Dipper constellation. In ancient China, he was deemed to be the god in charge of learning and scholarship so people respectfully called him Wenqu Star or Wenchang (Prosperity of Learning) Star. If somebody was chosen by his red brush, he would be a Zhuangyuan, the Number One Scholar.

There are 3 ways to visit Xi’an City Wall. You could choose one according to your interests and needs.

Buy your entrance ticket at any open gates, walk up to the top of the wall and start your Ancient City Wall hiking. Here’s a recommended route for a circle tour: South Gate → West Gate → North Gate → East Gate → South Gate.

Shows on the Wall

By bus: Take a bus to Nanmen (南门) station to go up the City Wall from the South Gate. Or to Dongmen (东门) station to the East Gate. Most of the buses in the city can get to these two gates.

1. The best time to tour Xi’an City Wall is late afternoon when the ancient wall is lit up by the setting sun.

2. Prepare sun cream and a hat since there is barely shelter on the wall.

3. A golden temple at the northwest corner of the city wall, called Guangren Temple, is the only Tibetan Buddhist temple in the Shaanxi area.

4. Chinese New Year Lantern Fair is an annual event held on the Xi’an City Wall, usually from late January to early February, when you can see varieties of lanterns and magnificent festive night views.