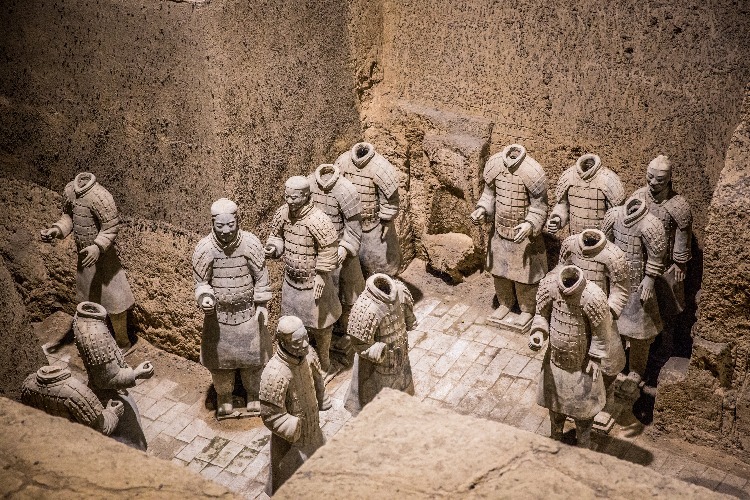 12 Amazing Facts About the Terracotta Army You Didn't Know

1. The Terracotta Army Was Originally Discover by Farmers

The Terracotta Army was found by a group of farmers in Shanxi Province while digging a well at 1.5km east of Emperor Qin’s mausoleum.

They found several broken fragments of pottery warriors, then immediately contact local authorities who notifies archaeologists in this region. This pottery led to the discovery of the first warrior of the Terracotta Army.

The Terracotta Warriors and Horses were approximately started to build in 246 B.C and 247 B.C, the specific date cannot be verified. The whole construction completed in 208 B.C, totally lasted 38 years. The Terracotta Army has a history of over 2200 years so far.

3. The Life-Sized Terracotta Army Is Taller than Modern Chinese

1. In Imperial China, the major form of battle is close combat, the emperor Qin would select those tall, strong men to join the army for consolidating his power.

2. The First Emperor of Qin wants to advocate the military power and still dominate the underworld after death, he orders to build an enormous army of tall terracotta warriors to protect his afterlife.

4. No Two Figures Are Exactly Alike

The terracotta statues are life-sized. The face of each soldier differs and is designed to be unique; archaeologists, however, have summarized the face shapes of these 8,000 soldiers by reference to eight Chinese characters: 国, 用, 田, 目, 甲, 申, 由, and 风.

Among the terracotta warriors, “目”, “甲”, “国” are the most common face shapes while “申” and “由” are the least common. And the face shape varies with different areas.

5. Three Pits of Terracotta Army Exhibited to the Public

Three pits have been excavated and displayed in Terracotta Army Museum. Designated as Pit 1, Pit 2, and pit 3 according to the time of discovery. Pit 1 was originally discovered in 1974 by local farmers while digging a well, then the archaeologists take years to continue to drill around and eventually unearthed pits 2 and 3.

Pit 4: There are no unearthed terracotta figures in pit 4, but only the backfilling soil. The expert speculated that it was not completed due to the peasant uprising in the late Qin Dynasty.

Does the Terracotta Army always look grey in your mind? But you know what: when originally made, the terracotta warriors and horses were painted with exquisite colors.

Having been buried underground for over 2,200 years and experienced burning, collapsing, and flooding, once excavated their colors have tended to fade and turn to grey. A study showed that the lacquer layer under the pigments of the terracotta army will oxidize and curl in just 15 seconds and peel off within 4 minutes when exposed to air.

Technology today, however, has helped us reveal the true colors of the terracotta army.

7. The Terracotta Warriors Were Not Made of Real Human Beings

The terracotta warriors and horses are made of solid clay, which is very adhesive and easy to obtain. It can be found around the site.

8. The Vary Hairstyle in Accordance with Rank

9. Terracotta Warriors Were Once Equipped with Weapons in the Hands

These pottery warriors were equipped with weapons like swords, Spear, and crossbows at the time they were completed. Why the weapons in the hands of terracotta warriors were disappear? The archaeologists infer that many of the weapons have been stolen.

In the late Qin Dynasty, civil wars break out frequently, the bronze weapons are widely used in the battles, it’s also a kind of rare metal material. The peasant armies coveted the weapons in the hands of this underground army, they dug and robbed the tomb.

The archaeologists have found many weapons lying in pieces in the pits, now display in the Terracotta Army Museum. Marvelous preservation of bronze weapons retaining shiny and almost pristine surfaces after being buried for more than 2,200 years.

10. Terracotta Warriors Are All "Single Eyelids"

The verifiable reason why terracotta warriors are single eyelids? 2,200 years ago, The Qin State governed the northwest of China, people there are East Asian Mongolian. The physiological feature of this race was a single eyelid, which was named the "Mongolian fold".

"Mongolian fold" is also called "epicanthus", that is, oblique or vertical folds from the upper or lower eyelids towards the medial canthus. This typical facial character is commonly found in East and Southeast Asian nations.

11. The Most Complete Terracotta Statues

Varying in appearance and role, there are thousands of terracotta statues excavated in the Mausoleum of the First Qin Emperor. Owing to their age of over 2,200 years, they have been more or less damaged, so most statues we see now are reconstructed by experts from debris. But the kneeling archers are an exception, still well-preserved without any artificial restoration. Why? Two reasons:

12. Emperor Qin's Personal Mausoleum Has Not Been Excavated

The Mausoleum of the First Qin Emperor is actually a luxurious underground palace. According to historical records, it contains a vast amount of treasure, such as lacquerware, silk, ceramics, paintings, bronze vessels, precious jewelry, etc. Owing to both natural and human factors, however, the emperor’s tomb itself hasn’t been excavated yet. There are three major reasons for this:

Firstly, the State Administration of Cultural Heritage stipulated a policy long ago not to take the initiative to excavate any emperors' tombs.

Secondly, the Mausoleum of Emperor Qin is a huge labyrinth of pits. More than 180 funerary pits were discovered. The terracotta army was in just one section of these pits, and there are many other unknown sections. This is an arduous long-term mission that demands careful step-by-step planning.

Thirdly, the protection and excavation of the Mausoleum is a delicate project. With the absence of local and peripheral knowledge, coupled with the immaturity of preservation techniques on unearthed cultural relics and research ability, we can’t be sure of getting into the tomb without destroying some of its contents.