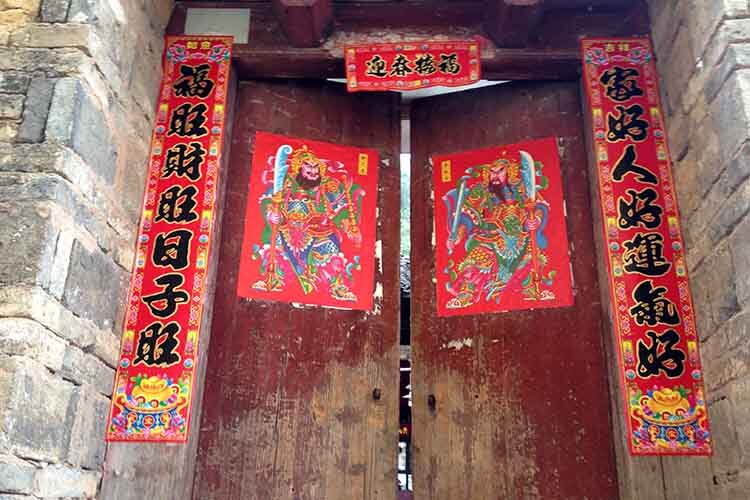 Chinese New Year (Spring Festival) is the most ceremonious traditional festival in China, as well as an indispensable part of Chinese culture. But why do Chinese people celebrate this festival? Why Chinese New Year has so many traditions? Read these three interesting stories and you will find the answers.

In ancient times, there was a big-horned monster called "Nian" who lived at the bottom of the sea all year. But on Spring Festival Eve it would come out to devour livestock, crops, and even villagers, especially children. As a result, all the people would flee from their homes to remote mountains to escape the danger each year on this day.

One Spring Festival Eve, closing the doors and windows, people in Taohua (Peach Blossom) Village were preparing to flee with all their possessions. An old beggar with a stick and a bag in his hands came to the village to seek shelter, but no one had time to care about him except for an old woman who gave him food to eat and suggested he get away from Nian.

On the stroke of midnight, the monster Nian rushed into the village but immediately stopped as soon as it saw the red paper pasted on the door, all the candlelight in the house, and the old beggar dressed in red, laughing at him. Nian could only take flight with great haste at the sound of firecrackers exploding in the yard.

The next day, the villagers came back home and were very surprised to find everything in good condition. It suddenly occurred to the old woman what the old beggar had said and she told the other villagers. People then realized that Nian was afraid of the color red, loud noises, and bright light.

From then on, the way to get rid of Nian spread from mouth to mouth and quickly became prevalent. Every Spring Festival Eve, people would glue red paper with couplets written on them at the doors. They would stay up late or all night (守岁 shǒu suì) with new clothes on, to wait for the New Year's arrival, lighting lanterns and setting off firecrackers.

An ancient Chinese legend says that there were two deities who controlled evil spirits in the ghost world. So Chinese folk carved the appearance of those two deities on peach wood and put it outside their doors to drive out evil.

By the Song dynasty (960 -1279 A D), Taofu was gradually replaced by two pieces of red paper and evolved into today's Chinese New Year couplets.

Having evolved from the ancient custom of defeating evil spirits, nowadays Taofu serves as a lucky decoration and expresses people's best wishes for the coming new year.

3. Story of the Door Gods

Emperor Taizong of Tang had fallen ill, and one night he lay tossing and turning in his bed and had a really bad dream. Ghosts howled and screamed in his head all night. The next day, he told his two best soldiers, Qin Qiong and Yuchi Gong, about the dream.

The next night, these good soldiers stood outside the emperor’s bedroom door. One held a club and the other, an iron rod. In the morning, the emperor said that he had slept like a log. But the soldiers could not spend every night guarding his room.

Since then, pasting pictures of the two Door Gods on the front door on New Year’s Eve has become a tradition that continues today.