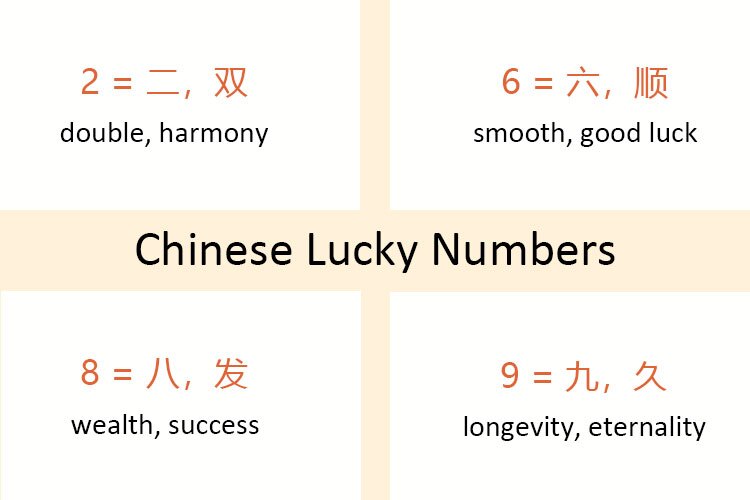 6 and 8 are the two luckiest numbers for 2022.   6 pronounces similar to the Chinese expressions of “smooth”, so 66 means “everything goes well”.

8 is lucky as well because its pronunciation is similar to that of the Chinese word of making fortune.

8 is considered the luckiest number in Chinese culture. In Mandarin Chinese, the pronunciation of “eight” is close to that of the phrase meaning “to make fortune”. The number 8 is also uniquely symmetric, and when laid on its side, resembles the Greek symbol for infinity.

Chinese people tend to prefer the number 8 when buying a house, license plate, or telephone number, even if it means paying extra money.

The Chinese government complied with euphoria over the number 8 in the year of the Olympic Games, 2008, the opening ceremony of the Summer Olympics in Beijing began on the eighth of August (08/08/08), at precisely 8 minutes and 8 seconds past 8 PM, local Beijing time!

9 is considered especially propitious. This is partly due to the fact that the pronunciation of “nine” is close to that of the word “long-lasting” in Chinese. So Chinese couples would be glad to get wedding gifts containing the number 9, like a bouquet of 99 roses, which has an auspicious meaning of “have a long-lasting happy life together”.

In feng shui, 9 is the highest on the number scale and represents the “ultimate masculinity”. It is used to symbolize the supreme sovereignty of the emperor. So 9 or some multiple of 9 were often used in imperial house designs, like the 9,999 rooms in the Forbidden City.

6 is pronounced “liu” in Mandarin Chinese, and this sounds like the Mandarin Chinese word meaning “flowing, smooth, or frictionless”. Therefore, the number 6 has the meaning of “everything will go smoothly” and is considered lucky, especially where it occurs in multiples. In feng shui, the number 6 represents authority and power.

2, pronounced “er”, is considered lucky because “all good things come in pairs”. Among young people in China, the number 2 is also used to describe the frank, innocent, reckless personality. They believe “2” reflects a positive attitude towards life.

In a traditional Chinese wedding, the new couple’s house and the restaurant will be decorated with 2(double) paper cuts, symbolizing double luck.

Chinese people love to use lucky number combinations to express their wishes or emotions.

The two most unlucky numbers in Chinese culture are 4 and 7. Chinese people don't like them and avoid using them in their life.

4 in China (and in Korea, Japan, and Vietnam) is considered terribly unlucky because it sounds like the word for “death”. It is really a bad idea to assign the number 4 to anything. Generally, door numbers and car registration numbers do not contain any 4s, especially not in the last digit place.

7 pronounces in Chinese similar to the pronunciation of the word meaning gone. 7 also relates to ceremonies that release dead souls from purgatory. In some parts of China, the 14th or 15th of the 7th month in the Chinese lunar calendar is the Ghost Festival, the date for holding sacrificial ceremonies.

1: It is often associated with the meanings united, beginning, independent, complete, and infinite.

3: In feng shui, 3 has a natural resonance in terms of beginning, middle, and end; introduction, development, and conclusion. You can see this number widely used in Chinese culture: the Three Gorges, the Three Kingdoms in Chinese history, and the three halls of the Forbidden City in Beijing.

5: has been used to classify many things in Chinese, such as the five elements in astrology, the senses, and the basic colors. It is a neutral number. In feng shui, the 5th level of life sometimes means the best.