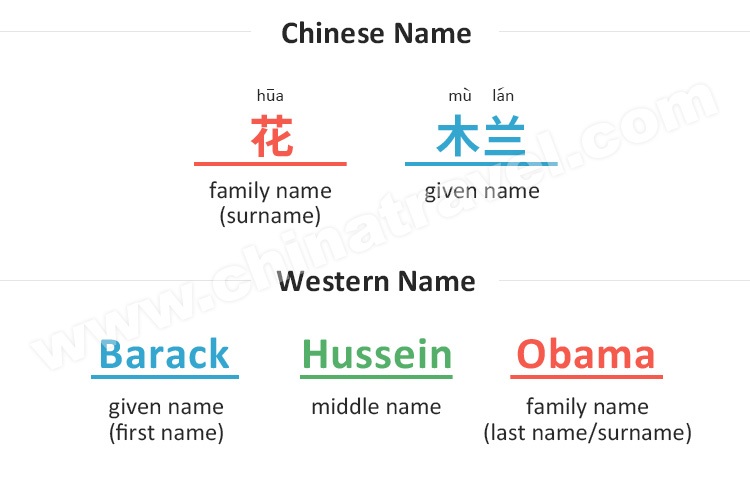 Chinese names are as long and esteemed as Chinese culture. It plays an important role in Chinese people's life. Naming in China reflects the aspirations and dreams of parents for their children. A harmonious name is believed to bring good luck and prosperity to the family.

A Chinese name consists of a family name or surname and a given name. When Chinese people say their name, they say their family name first, then their given name, opposite to the Western name order. If we take "Zhang San" as an example – Zhang is the family name, and San is the given name.

Here are the top 10 most common surnames in China.

As the most common surname in China, Wang is the Chinese word for king. It represents 93 million people, accounting for 7.25 percent of China's total population.

Liu is the 4th most common surname in China. It is the surname of the Han dynasty emperors.

Chen is the 6th most common surname in China. It represents 3.7 million people, accounting for 2.6 percent of China's total population.

Huang is a common surname in China and Aisa. It is also one of the most common surnames in Guangdong Province and Guangxi Zhuang Autonomous Region.

Zhao is the 8th most popular surname in China. Yet it ranks the first in the Hundred Family Surnames. Because it was the emperor's surname of the Song Dynasty when the book was finished.

Wu is a common surname in China representing 26.8 million people or 2 percent of the population. The name originates from the State of Wu during the Warring States period.

Zhou is the 10th most common surname in China shared by 25 million people, accounting for 1.9 percent of the total population.

The usual Chinese surname has only one character, but there are exceptions consisting of double characters like Ouyang, Situ, Xi Men, Xia Hou, Dong Guo, Gong Yang, Gong Sun, and Shang Guan.

Chinese given names are usually made up of one or two characters and are written after the surname. Two-character given names can be chosen for each character's separate meaning, but the name remains a whole that is said together, while sometimes the combination no longer means anything.

The first will be his surname or family name, which has been passed down from his ancestors. For the other two names, one character may be a generation name. In China, in the olden days, the clan association decided on the generation name, and the selected character had to differ from previous generations.

Generation names for the clan no longer exist, but the practice is adopted by the more traditional families. Names of cousins might share a common character, like Zhi Ming, Zhi Hui, and so on. Generation names help to reinforce the strength and unity of the family and are usually chosen by the head of the family of the patriarch.

It is also apparent that some names reflect the aspirations and dreams of parents for their children. When parents are choosing a name for their child, then, there are various factors to consider. It should sound pleasant and be symbolically meaningful.

15 Most Popular Chinese Names for Girls in 2021

How to Pick a Lucky Chinese Name

Choosing the right Chinese name means being aware of many cultural differences. How to choose a Chinese name for yourself? Here are some pieces of advice.

Chinese parents spend a lot of time discussing when choosing a name, as names are thought to influence a child’s future. The popular names above are popular and common with good meanings. You can choose a Chinese name from them.

3. Choose a Name that Sounds Similar to Your English Name

Each Chinese character represents a specific meaning. Two characters put together may represent a new idea. Chinese parents pay great attention to the meaning of names when naming their children. They choose names with good meanings.

The popular Chinese names above all have nice meanings. You can choose a Chinese name from them, or ask your Chinese friend for some advice.