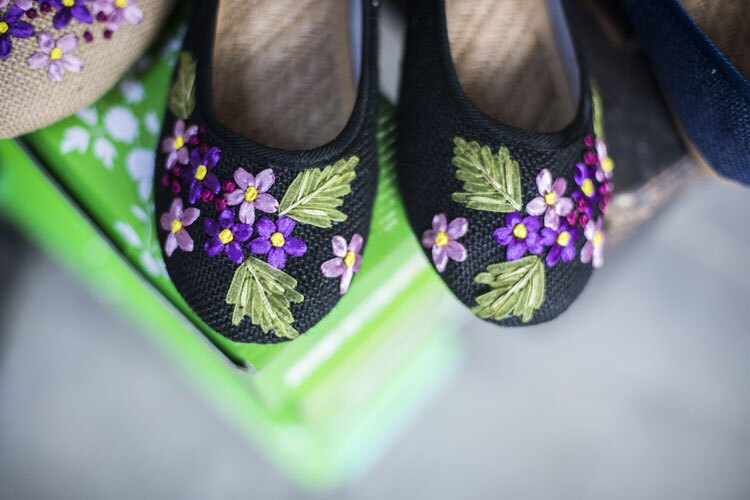 Chinese foot binding, also known as the Three-Inch Golden Lotus in classical Chinese literature. It is derived from the aesthetic standards of the ancient Chinese. In this aesthetic standard, a girl with a pair of small feet was considered physically attractive.

According to ancient Chinese social custom, girls over the age of five, besides the big toe, other toes were required to wrap with a long piece of cloth until their feet were bent into a bamboo shoot shape, which was known as the three-inch golden lotus.

After binding the feet, the girls often wore a pair of embroidered toe-spring shoes to show that they are well-educated ladies.

Foot wrapping is known as the Three-Inch Golden Lotus because Buddhism considers the lotus is holy. So calling a pair of wrapped feet a lotus is an elegant way.

What's more, in ancient Chinese culture, gold symbolizes something precious and beautiful. Thus, it is a lovely way to call a pair of wrapped feet a golden lotus.

Those girls, who had a pair of big feet of more than four inches, often became the laughing stocks in ancient times.

Reasons for Popularity of Bound Feet

According to historical documents, there are two reasons behind the popularity of bound feet among ancient Chinese women. One of which is the advocacy of the rulers. The other one is the praise and appreciation of scholars in their poems.

Advocacy of the Rulers

According to historical records, foot-binding began with the preference of Li Yu, for small-footed concubines. He was the last emperor of the Southern Tang Dynasty.

The concubines competed to have their feet tied in the shape of bamboo shoots to make them appear smaller.  The concubines with small feet also danced on the golden lotus to please Li Yu.

From then on foot-binding became widespread among the royal family. And later it became a custom for all women until the fall of the Qing Dynasty (1616-1911).

Praise and Appreciation of Scholars

Also to the rulers' advocacy, ancient scholars played an important role in encouraging women to wrap their feet. They even wrote poems and drew paintings in praise of women who wrapped their feet for aesthetic purposes only.

What's more, scholars outlined the criteria for a perfect pair of three-inch feet. They were characterized as thin, small, pointed, soft, and sweet. As a result, women of different backgrounds tied their feet.

Although, the foot binding was a painstaking job for girls. However, they were still forced to do so by their parents to find promising future husbands and woo the trend of society.

Evolving from the Southern Tang Dynasty (937 -975) to the Qing Dynasty (1616 -1911), the ancient shoes for the Three-Inch Golden Lotus were generally divided into high cylindrical shoes, low-cut shoes, toe-spring shoes, and plain-toe shoes.

But, due to historical reasons, there were still some women who did not want to give up. So a group of factories specializing in the production of three-inch golden lotus shoes emerged to meet the needs of some women.

With the development of society, no girl could get a foothold after the demise of the Chinese people in 1949. Thus, the factories specializing in Three-Inch Golden Lotus shoes were about to close down. They can only be found in some specialized museums and antique markets in China.

The Shanghai Ancient Shoe Museum is the largest museum of ancient shoes in China. The Three Inch Golden Lotus Shoes is the highlight. It is also known as the Shanghai Hundred Shoes Museum.

Shanghai Ancient Shoe Museum specializes in the collection and exhibition of ancient shoes, feet binding implements, embroidery implements, and shoe-making tools, and old photos from different corners of China. The ancient shoes are of various shapes and sizes from the Ming Dynasty (1368- 1644) to the Republic of China (1911-1949). They include the Three- Inch Golden Lotus shoes, women's shoes, men's shoes, and children's shoes. Those show the evolving history of Chinese shoes in a systematic way.

The museum exhibits Three-Inch Golden shoes with various patterns. Reflecting the ingenuity of ancient Chinese women, they have now become works of art.

Shanghai Ancient Shoe Museum is a window of cultural exchange between China and the world. Since its opening in 1990, it has received millions of visitors from all over the world. These include artists, connoisseurs, collectors, and scholars. The Museum has won accolades from visitors for its rich collections.

Shanghai Dongtai Road Antique Market is about 200 meters long. More than 120 antique stalls are lined up in rows. Those display all kinds of antiques and handicrafts.

They include Three-Inch Golden Lotus shoes, porcelain, bronze, jade, wood carvings, the four treasures of the study(brush, ink stick, ink slab, and paper), works of calligraphy and painting, lighters, bird's nests, clothes, and seals from the Ming Dynasty (1368-1644) and the Qing Dynasty (1616-1911).

Walking around the market, visitors can see various Three-Inch Golden Lotus shoes. These shoes were from the Ming Dynasty (1368-1644) and the Qing Dynasty (1616-1911).  Photos are also available.