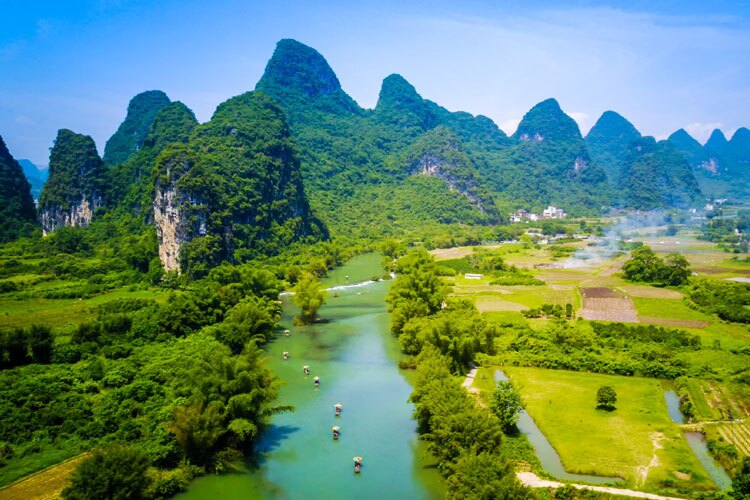 Generally, compared to the sweltering summers and chilly winters, the cool autumns (September and October) and warm springs (end of April to the beginning of June) are the best seasons to travel to China.

Time recommendations for travel, however, are blurred because of the sheer size of China. In other words, no matter when you come to this country, there are always certain views awaiting you to explore.

China's climate is divided into six categories as follows: tropical, subtropical, warm-temperate, temperate, cold-temperate, and Qinghai-Tibet Plateau temperate zone. Most of the country lies in the northern temperate zone, which is characterized by the warm climate and well-defined seasons, being suitable for habitation.

Actually, the climate in China varies greatly from south to north, especially in winter when dry and cold winds, blowing from Siberia and the Mongolian Plateau, lead to a huge temperature gap between south (above 0℃) and north (far below 0℃) China.

In summers, however, except for a few remote places, there is little temperature difference between north and south China for there are overall high temperatures in almost the whole country.

Rainfall in China varies from place to place and from season to season. Precipitation gradually increases from the northwestern inland areas to the southeastern coastal regions. And rainy season usually begins earlier in the southern regions, from May to October, while in the northern areas, it lasts for a shorter time, from July to early September.

Generally, spring is considered to be the best time to visit China. Early spring (around March) is an off-season when the weather remains cold and changeable with intermittent showers, and late spring (April- May) with an average temperature of 20℃ (70℉) creates an optimal environment for tourists who would come to this country.

In early spring: we suggest you travel to Shanghai or Beijing which are the most popular destinations in China. It would be fewer people during this time.

As for late spring, the fine weather means no true limitations for traveling in China. So we recommend you to visit the essence of this country or admire the spring color in some mountainous destinations such as the Li River and Zhangjiajie when drizzle adds special character to the views in the form of mountain mists in these places.

North: Walking around outside during the day, visitors can enjoy the bright and beautiful sunshine. But temperatures drop in the evening. You need to bring T-shirts and shorts for the daytime and warm layers, a light jacket, and pants for the night.

South: The southern region is warm and damp. By the late spring, it may even be hot by day. For hotter days, you may only need thin layers and shorts. For cooler days, however, weather-proof layers, sweaters, and light pants are recommended. Prepare raincoats and/or umbrellas for your family when traveling to the south in spring and a nice backpack for anyone who wants to participate in outdoor activities.

Summer (June to early September) is a hot period, with daytime temperatures of about 28+°C (92+°F) in most parts of China. Moreover, influenced by the monsoons from the ocean, it is generally a time for abundant rainfall, especially in the southeast coastal area.

Summer is a peak season mainly due to the summer vacation of Chinese students. And the weather is not lovely in hot destinations. We suggest you go to some remote resorts of China like Yunnan, Tibet, Qinghai, Inner Mongolia, and Xinjiang, where you may have the chance to exclusively enjoy the unique scenery. The weather is comfortable and the scenery is the best in these destinations in summer.

South: As it's rainy and sultry, sun cream, sunglasses, sunbonnets, and beach umbrellas are necessary.

Most travelers would find this season the optimal one to travel to China, even though some may think that the weather in September still is a little hot and changeable. From October to November, nearly the whole country would be carpeted by fall colors, and days become cool and dry with clear blue sky.

Similar to spring, there are not too many places in China that you cannot visit during this season. Therefore, we highly recommend you to explore the top destinations in this country to avoid the pity of missing worthy places.

And when November comes, you would also have the choice to go to the north of the country to see its first snowfalls.

North: As it is cool during the daytime and a little bit cold in the evening, long-sleeved coats and woolen sweaters are needed.

Central: It's warm in the daytime and cool in the evening, thus, light long-sleeved coats are enough.

South: As it is still very warm in South China, short-sleeved T-shirts and shorts are recommended. Meanwhile, tourists need to bring some light long-sleeved coats in case of the cold weather during November.

Winter - Cold but a Good Time to Come to China

Due to the cold and humid northwesterly winds blowing from Siberia, most regions in China experience chilly and damp winters. Temperatures in the northern parts of this country, especially at night, often drop below freezing. And during most days in the north, you experience snow.

Actually, there is a narrow temperature gap between south and north China in this season, except for some places located in the tropical zone like Sanya, Yunnan, and Hongkong with mild winters.

Generally, winter is a low season for traveling in China, with relatively lower prices for accommodation and other expenses.

Visit big cities to experience traditional Chinese festivals, like Chinese New Year. Cities like Shanghai and Beijing would be fewer people because many people who just work there go back to their hometown to get together with their family.

Go for some unique winter sceneries like Harbin's ice and snow world, where a large number of ice sculptures, varying in styles and scales, awaits you to explore.

Moreover, if you get cold easily, we suggest you head down south to Sanya city of Yunnan Province where you can enjoy a mild winter with an average temperature of around.

North: Due to the severe cold weather, very warm and thick clothes should be worn, such as down jackets, cotton-padded jackets, thermal underwear, cotton glove, scarf and warms shoes.

Central: Due to the chilly and damp weather conditions, warm clothes such as down jackets are needed.

South: Though it's not that cold in South China, warm clothes are still necessary.