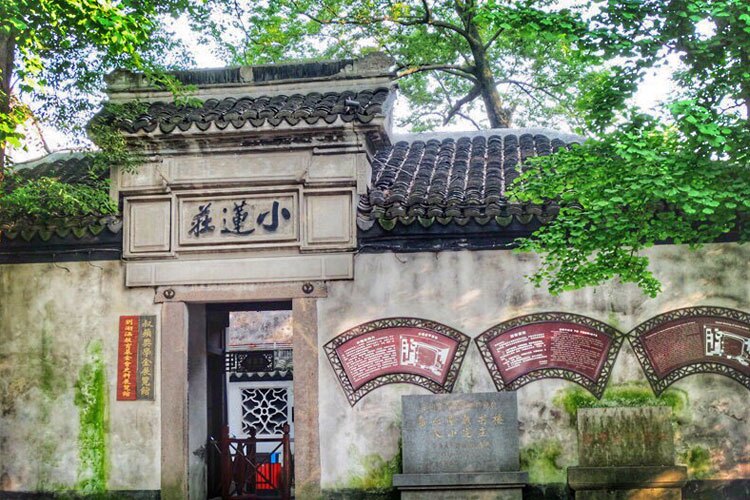 Nanxun is a soulful and profound water town with a history of over 1,400 years. It is the richest town in modern Chinese history and totally different from other small, girly water towns: the stone roads, bridges, and waterways are wide, and houses are big. The most special feature of it is, that its architecture mixes Chinese and western styles.

The town is one of the six famous ancient towns in south China, along with Tongli, Wuzhen, Zhouzhuang, Xitang, and Yongzhi. Some visitors like to visit Nanxun together with Tongli.

When you enter the town, you will feel the profound water town history and be amazed by how civilized and rich it was. There are many attractions in this big water town. So if you meet a big tour group at an attraction, you can go and see other attractions first to avoid the crowds. When they leave, return to your planned route.

The following 6 highlights of Nanxun are highly recommended for you to explore.

1. Take a Boat Ridealong the canal to appreciate the beauty of it.

These are actually houses of locals. Many owners still live there. The houses, one or two-story tenement dwellings, built along both sides of the canal stretching some 400 meters, date back some 400 years to the end of the 16th century, i.e. near the end of the Ming Dynasty.

They are characterized by their distinctive white walls and black-tiled roofs. One-Hundred Residential Houses, according to historical records, was built to house the famous water town's army of servants and their families, which, given the relative luxury even of these handsome servant houses, is very impressive, and bears further witness to Nanxun's former status as part of South China's lucrative silk trade.

One-Hundred Residential Houses of Nanxun Water Town can be said to be a living museum in the sense that the ancient houses are still inhabited, and the residents wash their clothes in the canal just as they did 1400 years ago.

It is the former private garden of Nanxun's richest man. The centerpiece of the enormous garden compound, which comprises over 7,000 square meters, is a lotus pond. Artificial streams run here and there throughout the large garden, with winding, in places tree-lined paths nearby, and with numerous smaller buildings surrounded by lawns, shrub oases, flower gardens, and scattered trees.

The garden is considered the best of Nanxun's private gardens. The lotus flowers in the pond blossom pink in the summer, creating a colorful, magical effect. The walls inside the buildings are adorned with paintings, plaques, and stelae that were the work of famous calligraphers, which points to another interesting detail about Nanxun Water Town:

Just as the wealthy city-states of early renaissance Italy attracted some of the period's best Italian artists, Nanxun Water Town - thanks to its silk industry wealth - attracted numerous Chinese artists, from painters to poets and calligraphers.

A phonograph in the residence

The former residence of Zhang Shiming, a wealthy Zhejiang merchant who introduced many foreign luxury goods – principally luxury goods from Western countries – to the people of Nanxun, was built during the period 1889-1906, in the late Qing Dynasty.

The entire area of the former residence, including its complementary garden, spans some 6140 square meters. Like many similar residences in Nanxun, the Former Residence of Zhang Shiming combines traditional Chinese and western architectural styles.

The residence comprises numerous rooms, including salons, halls, studies, and bedrooms. Each room is designed in a separate style, yet the whole is one of harmony, reflecting the "organic" nature of the construction philosophy.

Construction of the exterior required several tons of delicately chiseled stones, while its exquisite embellishment, especially its arched window frames, involved countless wood-and-brick carvings. The window glass itself, with its intricate, Gothic-style tracery is so unique that it keeps the windows perennially dust-free.

5. The Spanish-Style Former Residence of the Liu Family (Red Houses)

Built-in 1908, it was the residence of Liu Ti, the leader of the "Four Elephants” (i.e. the wealthiest people) in Nanxun. The residence is called "the red house" by local people because of two western-style buildings with red bricks.

In the case of Liu's Garden, the facade of the main building is designed in traditional Chinese style whereas the rear side of the building, which faces the garden, is built-in Western-style – i.e. it has arched French windows and a second-story balcony that is supported by Greek columns, creating a gallery of sorts. This feature distinguishes the private gardens of Nanxun from all of the other private gardens of southern China, which makes them of particular interest.

Jiaye Tang Cangshu Lou (literally: Jiaye Hall (Tang) Book-Depot (Cangshu) Multi-Storied Building (Lou)) is a private library built by Liu Chenggan in the period 1920-24. The library's collection of books and documents numbers some 600,000. The facade of the library reflects a western architectural style, though its rear portion, as well as the garden proper, is reminiscent of the layout of a typical scholar garden, with a lotus pond surrounded by rockeries and pavilions, the whole connected by walkways, some of which are narrow corridors.

Despite the western style facade, Jiaye Hall Library comes closest in form and spirit to the typical scholar gardens of the city of Suzhou, situated on the northeastern shore of the lake that the two towns share, namely Lake Tai. Jiaye Hall Library, which has an extensive collection of ancient documents, is one of Zhejiang Province's four ancient libraries.

How to Get to Nanxun

This will solve your problems, like not knowing Chinese, finding the bus or train station, going to the wrong station or town, and waiting. Our English-speaking guide who knows Nanxun well and our experienced driver will make your trip easy and fun, and serve your party only, on your tour day.

We pick you up at the place you tell us (hotel, cruise terminal, airport, or train station) and guide you in Nanxun, and then transfer you to the place you want to go:

The scenery of Nanxun is suitable for a visit all year round.

You may get confused with which water town is the best to go to if you are the first time to visit, so we list all the water towns with detailed information for your inspiration: